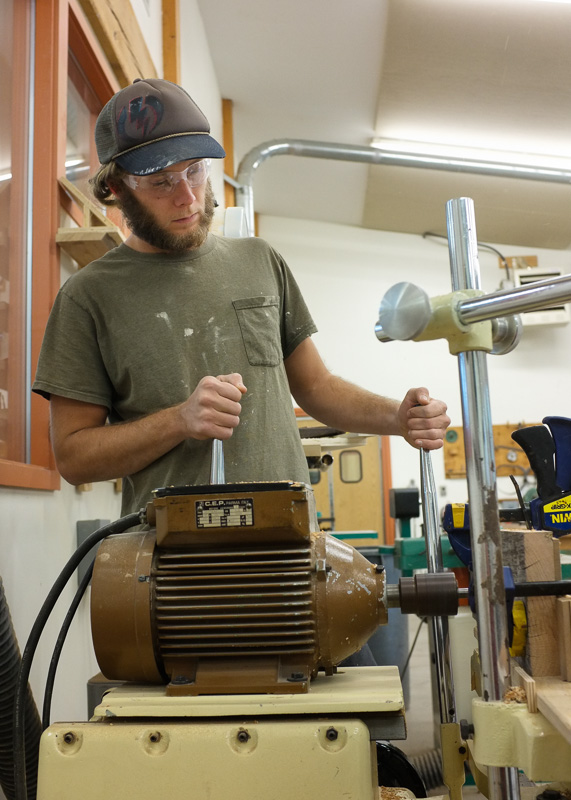 Dustin Fowler is a student in the fall clay class (you can tell by his shirt and the brim of his cap). Lately he’s been moonlighting in the wood studio where instructor John Clark has been helping him build a wood and ceramic wall piece. Here he’s driving the horizontal slot mortiser to make precisely located slots (I guess you saw that coming) in a series of weathered oak boards. 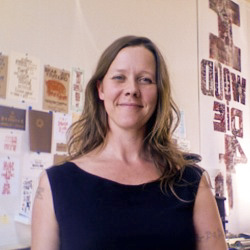 Oregon-based book artist Rory Sparks will teach an eight-week concentration in animated letterpress at Penland this spring. Rory cites the useless machines of Bruno Munari and Marcel Duchamp’s film Anémic Cinéma as two sources of inspiration for the workshop. Below, she talks more about why these two artists and works animate her thinking about motion and letterpress.

“As a bookbinder, I’m often thinking about how text is read, and how the experience and act of reading can change with movement and environment. To me, Munari’s useless machines reference words in a graphic way. Sentences, or poems floating in three dimensional space. Here is my favorite useless machine (Maccine Inutilli):

“In Duchamp’s Anémic Cinéma, the optical illusions that are produced are incredible. Especially that moment when your brain clicks and your vision shifts, and you see the depth and protrusions within the illusion. But I’m actually more excited about the concept than anything–the idea behind the project–prints meant to be viewed in motion. I’m looking forward to exploring with my students what other types of imagery would be best viewed in motion.”

(At right: rotorelief discs that were placed on a record and filmed in Anémic Cinéma. Duchamp included this note: “The disc should turn at an approximate speed of 331/ 3 revolutions per minute, this will give an impression of depth, and the optical illusion will be more intense with one eye than with two!”)

Rory Sparks
Moving Pictures: Animated Letterpress
March 9-May 2, 2014
In the letterpress studio
Let’s get things moving! We’ll explore various methods of incorporating kinetic design and animation into our letterpress work, including flip books, thaumotropes, zoopraxiscopes, red/cyan 3d anaglyphs, mobiles, and combinations of all of the above. We’ll cover the fundamentals of letterpress including press operation, typesetting, and polymer plates, and we’ll use various low-tech methods for getting images onto paper. We’ll sharpen skills and employ the letterpress as a perfect modular system for stop-frame animation. Inspiration will come from Marcel Duchamp’s film, Anémic Cinéma, Bruno Munari’s useless machines, and, of course, Eadweard Muybridge. All levels.

To find out more and register for this workshop click here.
Spring scholarship deadline is November 29.
Please note: applications need to be at Penland by this date to be considered for scholarship. Overnight service may not deliver to Penland’s campus on time, please plan accordingly.

Rory Sparks is a book artist and founder of Em Space Book Arts Center in Portland, Oregon, a membership-based studio. She specializes in letterpress printing and limited edition books for artists and photographers. She teaches at various institutions including Oregon College of Art and Craft, Pacific Northwest College of Art, and Em Space. She produced all three Orchard Editions for the Silas Finch Foundation, as well other projects and editions for them. In 2013, she was a master printer at Penland’s Winter Letterpress and Print Residency. Right now, she’s probably listening to Willy Mason sing “Talk Me Down.” 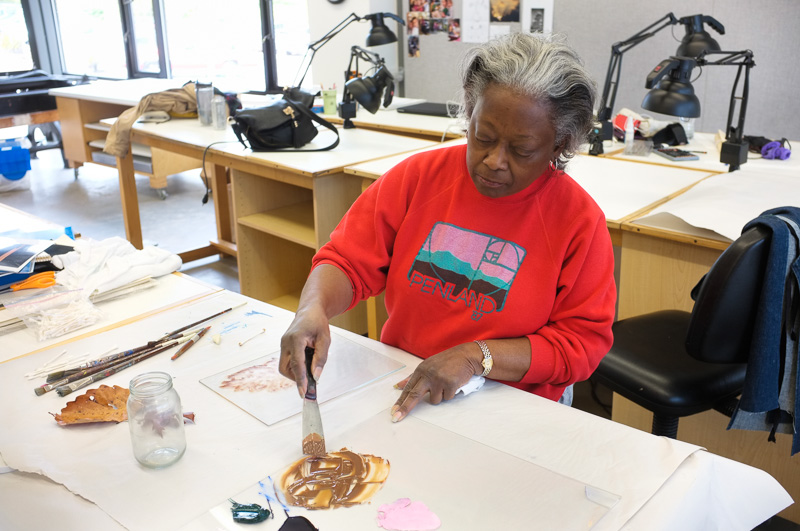 Student Tina Hall mixing ink for a montype while sporting a Penland sweatshirt she bought during her first class in 1987. 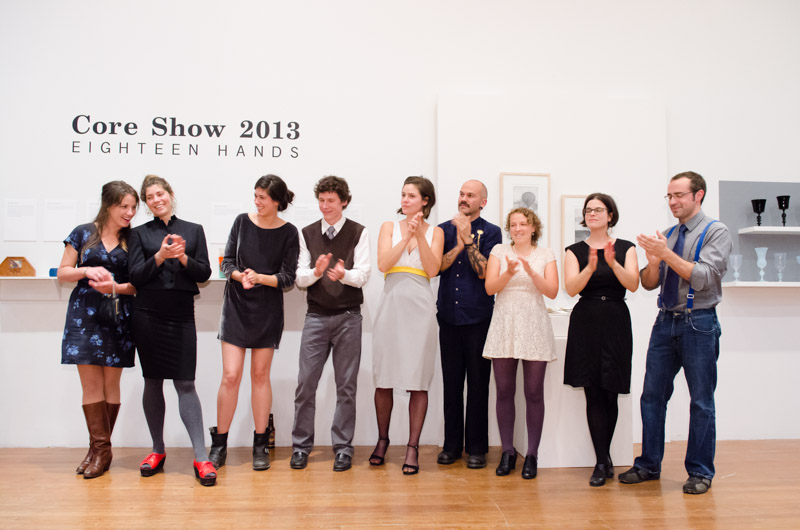 The 2013 Core Show, this year’s annual exhibition of work by Penland’s core fellows, took place in the Gorelick Social Hall on September 12 – 17 (it doesn’t stay up for long because we use that room for so many other things). The big opening party was on September 12. Here is a slideshow from the opening plus a few examples of each person’s work.

Pearl Grindstaff, who worked in the Penland kitchen for 75 years (that is not a typo), passed away on October 13 at age 91. Pearl began setting tables in the Penland dining hall during the summer of 1933, when she was 11 years old. She worked at the school every year except one until she retired in 2009.

In a 1994 interview for Penland’s newsletter, Pearl explained that she took over as head cook in 1956 after the regular cook made a terrible mess and infuriated Penland’s founder Lucy Morgan by refusing to do anything about it. Pearl valiantly tried to clean it up, but when she was called to the office the next day, she thought she might get fired. Instead they put her in charge. She protested that she didn’t know enough about menu planning and bookkeeping, but she agreed to try it for a week. “Well after a week I was stuck,” she said. “If I had tried to quit then, they would have offered me more help. There wasn’t much way out of it, so I told them I’d just go day to day, and I’ve kept on ever since.”

She continued managing the kitchen until the early 1980s. After that she worked in various capacities with a succession of Penland cooks, eventually concentrating on baking and general meal prep. She almost quit in 1990, but when her husband died suddenly, she decided to keep working. “This place is more like home than home,” she said in 1994.

Pearl’s childhood home was a house that is now part of the Penland campus. In 2004, the school held a fundraiser in her honor to raise money to renovate that house. Dozens of instructors, neighbors, core students, residents, staff, and other members of Pearl’s fan club donated work to a special auction that raised more than $10,000 for the project. As part of that event, the Penland kitchen was named for Pearl. Sculptor Elizabeth Brim made a sign for the kitchen door in the form of a steel apron.

Pearl Grindstaff was a beautiful woman with a strong, determined spirit. Even after her legs were crippled with arthritis, she preferred going to work over sitting at home. She is remembered by co-workers as a maternal figure, a friend, a cook who could do an astonishing amount of work in an hour, and a teacher. “She would go ahead let you do something the wrong way until you had made a mess,” says long kitchen staff John Renick. “Then, when she showed you a better way to do it, you would never forget.” His co-worker Day Dotson added, “She could be stern when you messed something up, but she was just a likely to laugh it off. We all learned so much from her.” Students, of course, remember her cakes, pies, cookies, and those biscuits.

Some of us who knew Pearl but didn’t get to work closely with her will always remember her sitting at her counter in the back of the kitchen, steadily slicing vegetables or rolling out biscuits, unaffected by the swirl of meal prep or the loud music–but keeping an eye on things. -Robin Dreyer 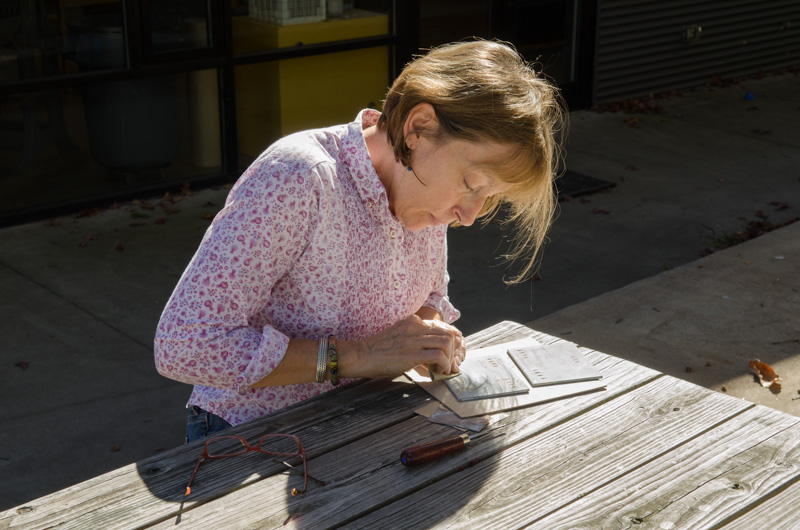 Student Marybeth Boone making wooden book covers in the fall books and letterpress Concentration. Marybeth, who has an MFA in sculpture, recently finished up 25 years as a school art teacher. “I thought about getting another MFA in book arts, but instead I come here.”