It’s September 20th once again, and time to celebrate the birth of Lucy Morgan! 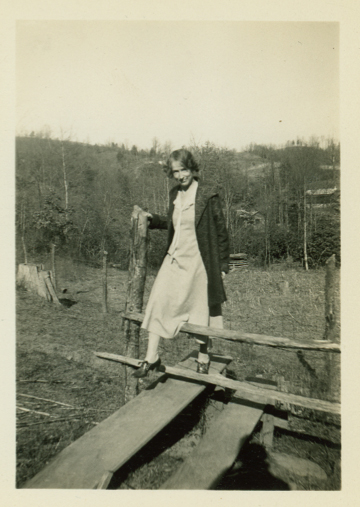 Lucy Morgan came to Penland in 1920 to work at the Appalachian Industrial School, an Episcopal school for children. In 1923 “Miss Lucy” traveled from Penland to Berea College in Kentucky to learn to weave. She returned with three looms and the intention of helping local Penland women supplement their family incomes through the cottage industry of weaving. In 1929 Morgan founded the Penland School of Handicrafts, which became today’s Penland School of Crafts.

When Morgan first came to Penland there were very few roads and most of the traffic was on foot. In Gift From the Hills, her memoir, she describes searching out one of the remaining old-time weavers in the area, a trip she expected to be two and a half miles long:

“We walked down hill and up, and down again, over rocky, furrowed roads, through short cuts, along bypaths, around big rocks, over fallen tree trunks. After miles of walking we met a man and asked him how far it was to Aunt Susan Phillips’ house… ‘Nigh on to two miles and a half.’ [he said].

…We trudged on, relieved when we came to a downhill stretch but discouraged when we began another uphill climb. We crossed small streams, pushed brambles and vines out of our way to keep to the twisting path, and plodded across hollows. Then we met another man. We told him we were on our way to the home of Aunt Susan Phillips…

‘Right from here, best I can figure it, ‘twould be about two miles and a half.’ [he said].

…When we were certain we had walked the third two miles and a half, we came to an open place and saw in the field down below us two sunbonneted women planting corn. We called down to them: ‘Could you ladies please give us directions how to get to Aunt Susan Phillips’ house?’ One of them pointed to the other. ‘Here she is.’”

We invite you to join us in celebration of this woman of indomitable spirit, honoring her birth and her vision for a crafts school in these mountains.

Lucy Calista Morgan, Penland’s founder, had a penchant for craft, international outreach, and waffles. In 1957 a group of international students stayed at Penland over the holiday season. They studied in the studios, enriched the season with dance and music performances from their own cultures, sang Christmas carols, and had snow ball fights. They were also introduced to the waffle.

Laurel Radley, Lucy Morgan’s great niece, shared some of Lucy’s favorite recipes with the archives. As she wrote, “Aunt Lucy loved waffles and had about a half-dozen recipes. I’m happy to have her waffle-iron and her recipes.” She also notes that the following recipe wasn’t credited to a source and explains, “Aunt Lucy of course had no occasion to cook really until she retired [from Penland]… I wonder if it wasn’t Henry. Who better to ask than the one who cultivated her favorite food tastes during her adult years?”

Henry Neal was Penland’s chef for over 20 years (c.1933-1955). Each summer he traveled by train from Chapel Hill, where he cooked for one of the University of North Carolina fraternities, to Marion, NC where Lucy would pick him up and drive him up to school.

So next time you fire up your waffle iron, try this recipe out with a nod to Lucy Morgan and Henry Neal!

Mix dry ingredients, then add all other ingredients but the egg whites and combine thoroughly. Fold batter into stiff egg whites and spoon into hot, oiled waffle-iron. Cook until steam rises and appears crisp and brown.