Does anyone remember Jago? Handsome, brooding, and mysterious, Jago (pronounced HA-HO) was a Penland core student in the late nineties. He missed every changeover. Every meeting. He never appeared in the studios, as far as anyone knows.

Jago was the invisible hot mess invented by Susan Feagin and Kara Ikenberry during their core fellowship. He was, Susan recalls, a character in a romance novel that was read, out loud, during a Kathy King class. When Susan left Penland in 1998, Jago left too, probably in pursuit of an aging heiress in the south of France. Susan remained stateside, pursuing other inventions, mainly in clay.

As a core student, Susan fell for ceramics, printmaking, and Jago-fiction as independent media. After core, Susan moved to Athens, Georgia, working in production at the now defunct Athens Banner-Herald. For the next four years she served as the newspaper’s last paste-up artist before continuing her clay (and screenprinting on clay) activities in graduate school at the University of Florida. 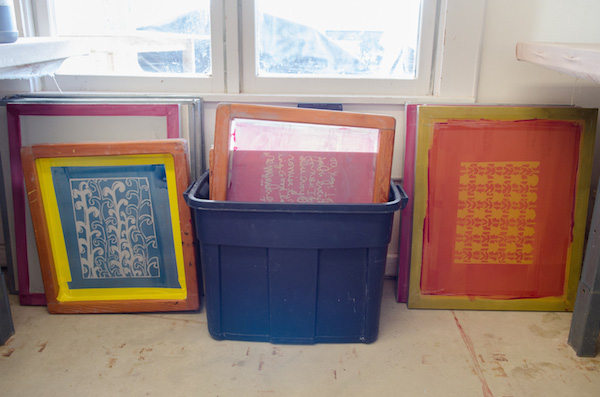 Screens by Susan Feagin in the Penland clay studio. Photograph by Robin Dreyer

Paste-up artists are now extinct. For those of you who don’t remember life before desktop publishing, allow us to explain: at the Banner-Herald Susan set type in columns by hand, adhering the columns to photo paper. The completed camera-ready pages were then photographed to make negatives that were then used to make plates for printing. Susan spent hours inside of rigid borders, looking at text in terms of column inches–adding, removing, and also sizing photographs. It was collage on a deadline. Not a job for the likes of Jago.

But the paste-up experience suited Susan fine, and her taste for text as a shiftable visual element can be found on the pots she makes today. 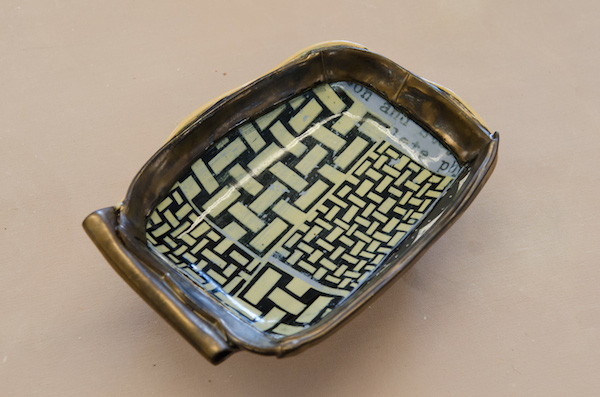 Recently, Susan made a few screens from a manuscript, a history of great moments in aviation that her dad, an aeronautical engineer, wrote for teens and never published. She will print selections from his typed pages on clay, handbuilding a vessel with his text layered in. 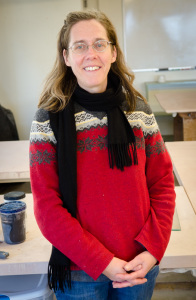 “It’s more liberating for me than working at the wheel,” Susan says, “I’m free to explore as I go.” Susan makes colored slabs, draping them on molds to shape her asymmetrical works. Surfaces are spaces where text or prints along avenues of underglaze can appear, and when the clay hardens, there are strips for sgraffito.

A flimsy romantic fiction like Jago probably wouldn’t get Susan’s choices, in life or art. But Rabulette and Maynard, Susan’s friends in Penland’s clay studio operation, do. Rabulette, a stuffed bunny rescued by Susan from a departed copyeditor’s file cabinet back at the Banner-Herald, is a somewhat high-strung conceptual artist assisted by the small and dedicated plush bison, Maynard. (For those of you who haven’t met these two tiny beings, they are real, and thanks to Susan, real presences at Penland.) 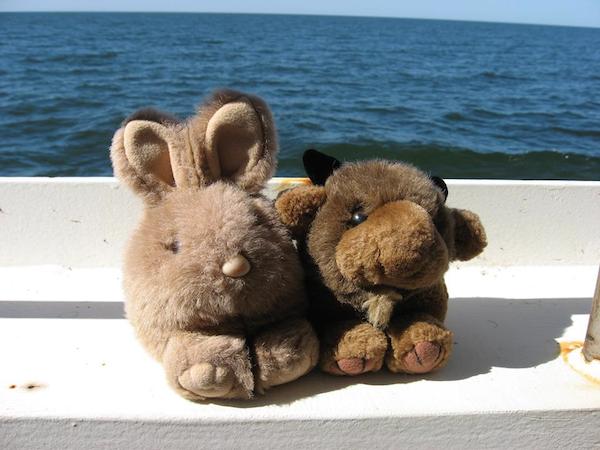 Rabulette and Maynard on vacation. Photograph blatantly stolen from Jane Crowe on Facebook.

“I adore Susan,” Rabulette says. “For Susan, pattern is a place where invention happens. But you should really ask Maynard to fill in for you all the details, as it’s time for my lunch.”

This winter, Susan will let go of surface control a bit–firing colored porcelain vessels in the salt kiln with Penland winter resident Janice Farley. She will also take a short break from her coordinator duties at Penland to teach, in late January, a screenprinting on clay workshop at Clay Works in Charlotte.–Elaine Bleakney