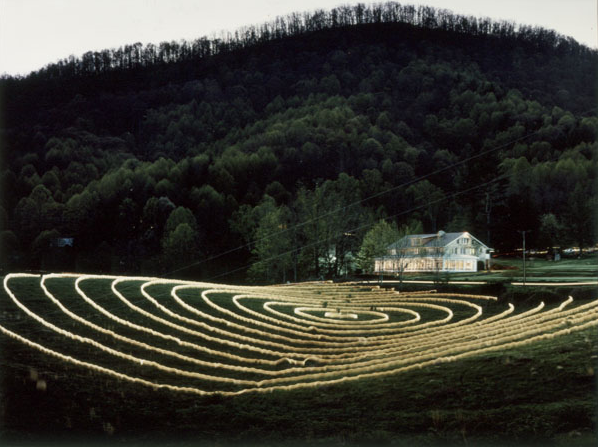 Carey Hedlund’s office is packed from floor to ceiling with shelves and boxes, each carefully labeled and filled with a piece of Penland history. When you enter the room, your eye spends a few moments taking in the sheer density of the files before settling on a large framed photograph on the far wall. The image, created by Dan Bailey in 1983, is a piece that Carey cites as one of her favorites in the Penland archives. It’s a familiar view of the Penland knoll with The Pines behind it, but with a long-exposure twist: the photographer took a light and moved it in concentric rings so that the knoll looks like it is covered in a layer of glowing topographical lines. There are no people in the picture, but the gentle kinks of the ribbons of light record the path of a person walking a hill at night.

Carey’s own path to Penland was similarly circuitous: “a long and twisted one” as she describes it. Growing up, she spent time at the Interlochen Center for the Arts in Michigan, where she learned crafts such as ceramics and metalsmithing. She’d heard of Penland by the time she was in high school, but it wasn’t until the fall of 2014 that she finally arrived for the first time as a new member of the Penland staff. In between, she got an undergraduate degree at Oberlin College, spent a few years in the visual collections of MIT’s architecture program, obtained a graduate degree in landscape architecture, worked for two decades as a landscape architect, teacher, and illustrator, and eventually found her way back to working with collections.

As collections go, the Penland archives are a bit unusual. “There are some archivists who believe that objects have no place in a collection,” Carey explains. “But how would you tell Penland’s story without them?” Indeed, in addition to the many thousands of pages of old publications and photographs and letters, the Penland archives include a rich array of objects, from textiles and pottery to more humorous items like a knit doll of an eccentric woman who worked at Penland years ago. “I’m still seeing things for the first time,” Carey adds. “Whenever I pull a box out and start reading, I find something that’s fascinating or funny or moving. There are real people in those boxes.”

For Carey, one of the primary challenges now is to make the existing Penland archives more pertinent and accessible. “It’s not a collection to hold close to myself,” she said, “it’s a collection to spread out and share.” She would like to see the archives cataloged in an online database where they would be visible. “That would also make them sustainable,” she notes.

One of the things that drew Carey here was Penland’s deep living history. “All archives are about a certain continuity,” she explains, “but there really is this fascinating tie between the early history here and what we do now.” Carey sees Penland as a school, but also a web of people and connections that make up a rich community. Reflecting on her first year here, she concludes, “It was a joy to find work in a rural community—that was a goal. The mountains are glorious. And Penland itself is what most people say: an incredibly beautiful place with an incredible energy.”