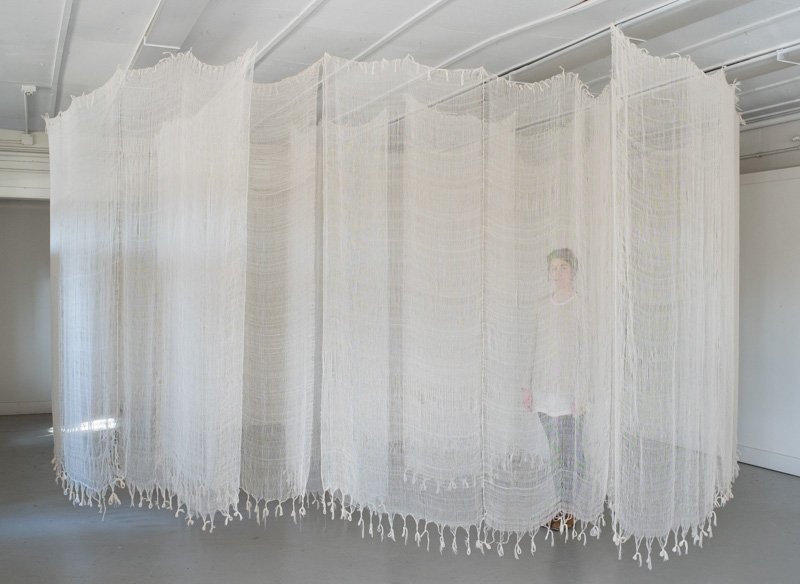 Katie Wigglesworth walks slowly and purposefully around and through a series of loosely woven, veil-like panels suspended from the ceiling of Penland’s flex studio. As she walks, her heels click on the concrete floor and the textile walls she is walking through part slightly as she passes. Katie has just completed a textile installation she began at Penland during the 2016 winter residency. “This piece came from a need for calm,” she explains. “I was in a transition time in my life when I began weaving these panels. I started thinking of labyrinths and meditation walks as ways of centering yourself, and the idea grew out of that.”

In 2015 she found out about Penland’s winter residency program from pictures posted on Instagram by a friend of a friend. She applied and was accepted for two weeks of residency in 2016. Katie works for a textile artist in Los Angeles making weavings on a tapestry loom, and this is how she has made most of her own textile work. But the Penland studio would give her access to floor looms, so she decided it was time she learned how to use one. 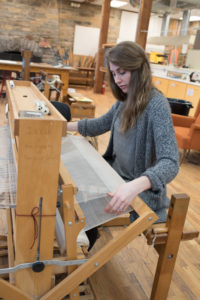 Katie has a friend whose grandmother is a weaver and belongs to a weaving group that meets every Wednesday night at an adult education center in Covina, California. “They have a group space with 150 looms,” she said. “They call their Wednesday night sessions a ‘class’ and they’ve been going on for eighty years. I was the youngest person there.” The other weavers taught her the basics of the floor loom, and in the 2016 residency she began working on her current project.

The panels are unpatterened plainweave made from white tencel yarn. Katie works the loom with a light touch so the weft threads are not compressed and retain some waviness. Each panel is about three feet wide and eight feet tall. While they are technically simple, their shimmering, diaphanous quality combined with Katie’s imagination makes them capable of transforming space.

After her 2016 residency, Katie continued weaving on Wednesday nights and then – after she got a loom – in her own studio. She used five panels to create an installation in a small gallery show, and as they accumulated, she began to imagine them creating a floor to ceiling labyrinth. “I started looking around for a place where I could set it up long enough to look at it and document it, but space is hard to come by in LA. So I decided to apply for the Penland residency again and bring all the panels with me in the hope that there would be a space I could use here.” 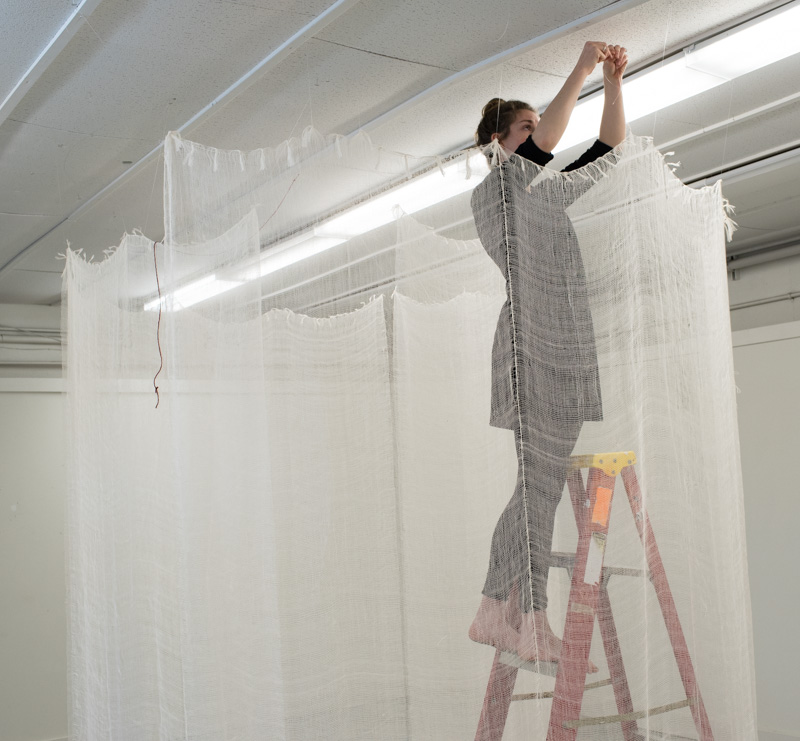 In January, she flew back across the country with twenty-one panels in a suitcase and spent most of her two-week residency weaving ten more. At the end of the session, she was able to realize her idea in an undesignated space called the flex studio.

She installed the piece. It was beautiful. She photographed it. Other residents came to look at it and walk through it. She took it down. It all went into a suitcase and back to Los Angeles. Katie says she will probably keep weaving panels until she has a chance to create another installation – with the form likely to change depending on context. Which is to say it will doubtless be seen again.