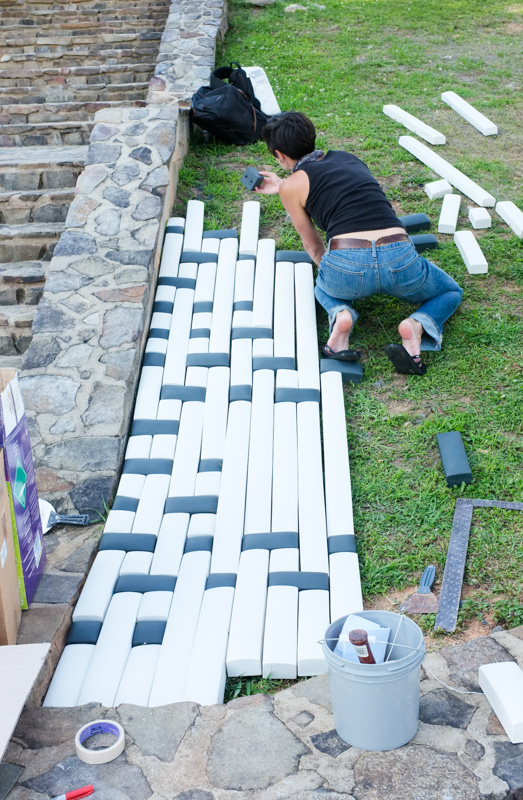 This is artist, former core fellow, and now Penland yoga instructor Rachel Garceau, putting together a ceramic installation outside the Pines. Made from slipcast porcelain, the piece is modular and variable, and Rachel has installed several versions in different places. The pattern represents the dots and dashes of Morse code. In this case, she’s spelling the words, “I can’t just limit it to a note.”

This phrase was said to her by instructor Dolph Smith, who was telling her that he’d been asked to write a sentence or two about Penland. He had a lot to say on the subject, so instead he sent a page or two along with the explanation, “I can’t just limit it to a note.”

Among Dolph’s many skills and interests is Morse code. He was trained by the Army, which stationed him as a signal interceptor in Berlin during the early days of the cold war. “Morse code is almost like handwriting,” he explained, “so we could identify individual operators, write down what they were transmitting, and also triangulate their locations. It’s all very archaic by today’s standards but it was interesting work.”

So, in honor of their shared affection for Penland and Morse code, Rachel used Dolph’s words for this installation.

Here’s a recording of Dolph speaking the phrase in dits and dahs.

For those of you who are completely puzzled by all of this, here is an explanation of Morse code.