Penland’s Edward F. Worst Craft House is one of the most iconic buildings on campus. Its red roof and rustic log siding are the unofficial welcome sign to visitors as they round the curve in the road and the expanse of the knoll opens up before them. It’s also one of the most beloved buildings, as anyone who has spent a lazy afternoon on the rocking chairs sketching, thinking, or chatting could tell you. In the eight decades the Craft House has been a part of Penland, it has housed everything from students and studios to offices and the campus supply store and has served as a gathering place for our community to perform music, dance, tell stories, and simply relax.

A little history: the Craft House was built to house Penland’s weaving studio, and its construction was a true community event. Penland students, instructors, staff, and friends helped to raise funds for the structure by contributing $2.50 to purchase a log or a window sash. The two-day log raising took place in May 1935, and the windows, doors, fireplaces, chimneys, and other touches to finish the building were added over the next few years. The Craft House was named in honor of Edward F. Worst, an early and influential weaving instructor at Penland, and it was home to Penland’s weaving program until 1949. In December of 2003, the Penland School Historic District was added to the National Register of Historic Places, in large part because of the Craft House and the history it holds.

In 2018 and 2019, the Craft House underwent a significant restoration. During our major restoration of this beloved building, we upgraded windows and doors, re-shingled the siding, worked on the roof, and—most notably—replaced about 20 percent of the logs that clad the exterior. Perhaps the most remarkable part of the process was how the new elements of the building were added so skillfully that they are already virtually indistinguishable from their older counterparts. 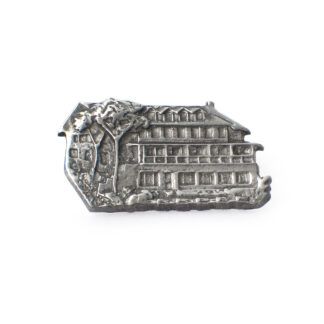