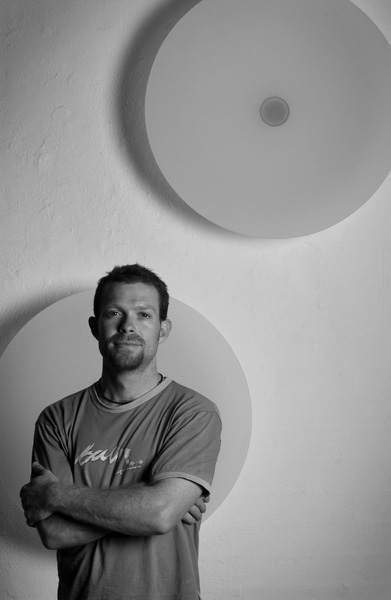 Seeing with Your Hands will be tailored to meet the goals and skill level of my students. I hope to maintain a good balance between technical and creative development throughout the workshop. We will work on building skills and ideas simultaneously as much as possible.

Light, form and void are some of the fundamental concerns within my own practice. We will consider these notions as a class, and I will be continuing to explore these themes in my own work throughout the eight-week workshop.

We will also have the opportunity to explore a range of color and pattern applications. My assistants Nick Fruin and Suzie Ririe will be bringing some exciting new colors for the color pot with them from New Zealand.

I will be making some large-scale work as well, and will introduce students to techniques they can use to increase the scale of their work should they desire. We may also be introducing some Venetian goblet making techniques.–Brian Corr 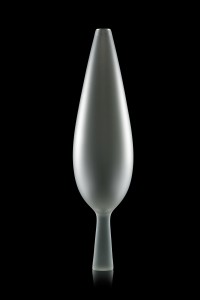 Brian Corr
Seeing with Your Hands
September 21- November 14, 2014
This workshop will help students with different skill levels expand their ability in the hot shop. Beginning students will develop confidence and professionalism while building a technical foundation. Intermediate and advanced students will expand and refine their hand skills while focusing on the development of their own design- and concept-based works. We’ll explore color and pattern and learn to scale up work. We may also delve into Venetian-style goblet-making. Demonstrations will be balanced with individual work time, idea development, and discussions. All levels, but some hot glass experience will be helpful. All levels. Code F00GA

Brian Corr is a studio artist who has taught at The Studio at Corning (NY), Pilchuck (WA), and Canberra Glassworks (Australia). His exhibitions include Sabbia Gallery (Australia), and Habitat Gallery (MI). His work is housed in collections including National Gallery of Australia, Gallery of Western Australia, and Glazenhis (Belgium). After a year as associate professor in the department of environmental art and design at Namseoul University in South Korea, he has returned to Australia.

Kim Harty and Charlotte Potter’s students logged some night hours in Penland’s Dye Shed this August, experimenting with projections using glass forms they made in the hot shop. The video above samples some of the magical abstractions created by students using glass objects as optical devices. Catching the class in performance with their devices meant staying up late. Very late. Midnight crits, anyone? 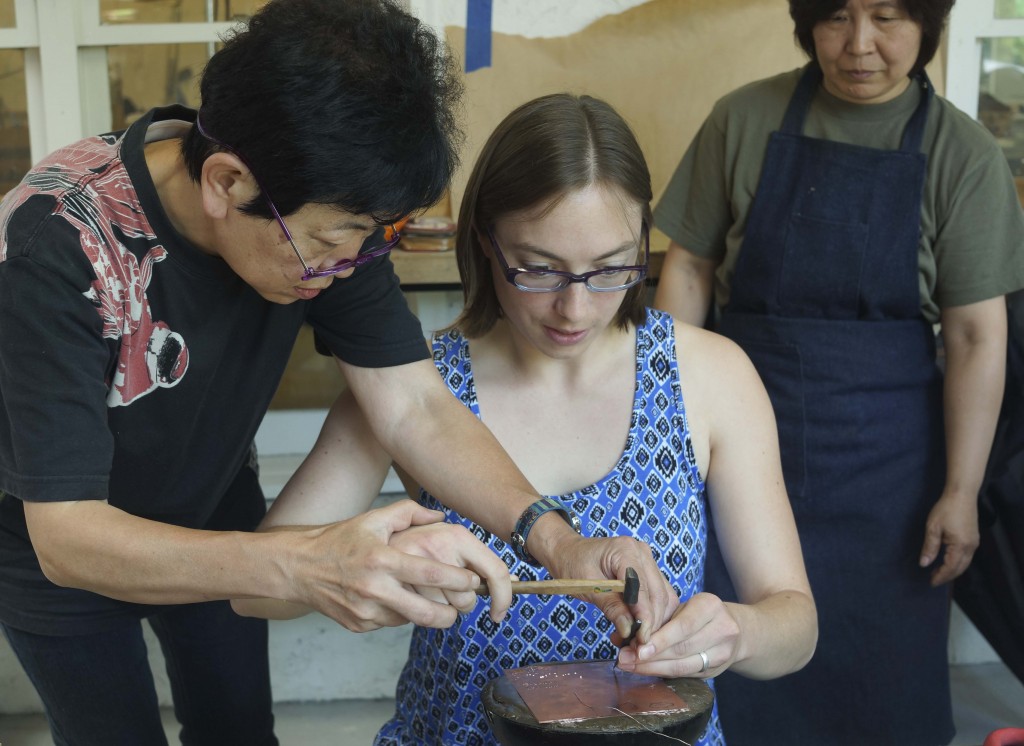 Textiles student Kim Mirus chisels a small channel to inlay silver wire after watching a demonstration in the technique by Kiyoko Fujie, at left. At right is metalsmith Hiroko Yamada, longtime Penland instructor and friend, who invited Kiyoko to Penland along with a group of female metalsmiths from Japan. (We’ll have more about Hiroko’s presence at Penland this summer in a future blog post.) Kiyoko is part of the first generation of female metalsmiths to apprentice with Japanese masters.

A new piece about Penland made for the series Around Carolina, produced for Time Warner Cable in North Carolina. It features short interviews with student Katie Fee, metalsmith Ndidi Ekubia, core fellow Angela Eastman, and deputy director Jerry Jackson–and many faces from our mid-July workshops. If you’ve never been to Penland before, this is a good appetizer. Thank you to Richard Green for stopping in to visit with us. 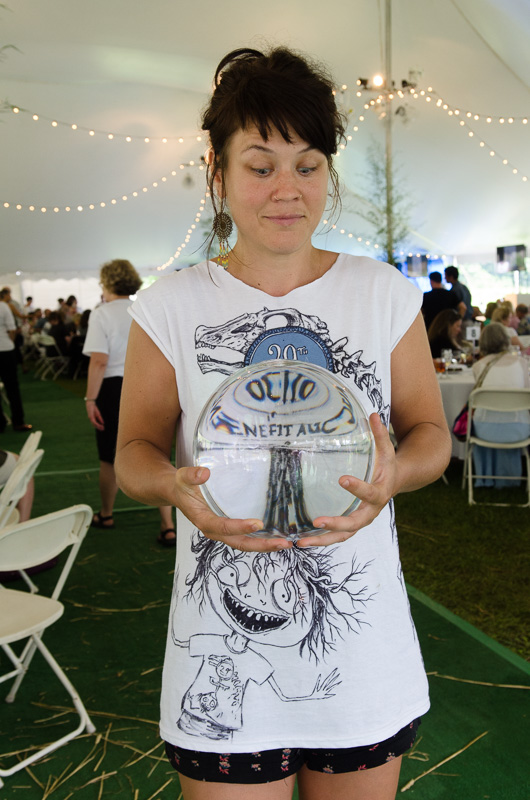 Our annual benefit auction was last weekend, and it’s impossible to represent with one picture. So instead of attempting that, we’re just posting a favorite picture. This is volunteer Julie Elkins in her elaborately decorated auction T-shirt carefully transporting one of the 192 water-filled glass globes that made up Pablo Soto’s beautiful auction centerpieces (4 globes per table). The auction was great and we’ll post a report in a few days when we have firm numbers. If you want to see more auction pictures, there is an album here.

Sometimes my work is very thoughtful, but just as often, it is an overt expression that results from whimsical manipulations of materials I’ve selected. 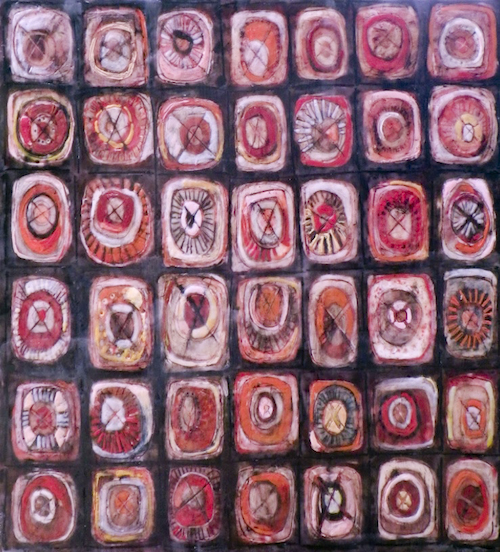 Jane Wells Harrison, It Can Be A Rock, encaustic, 2014

Jane Wells Harrison will teach mixed media, collage, and encaustic painting on surfaces both conventional and unconventional (including old slate roofing tiles) at Penland this fall.

Wells writes in her artist statement that her work “takes me to the easel, the workbench, the heated palette, and the enameling kiln.” In the mixed-media spirit of the class, Jane has invited esteemed metalsmith Robert Ebendorf, who will be a visiting artist and conduct a demonstration for students.

More about Harrison’s work and process can be found on her blog. 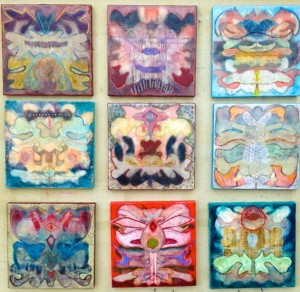 Jane Wells Harrison
Mixed Media with Encaustic
September 21- November 14, 2014
This workshop will cover all aspects of working with encaustic paint, with a special emphasis on combining encaustic with mixed media. Working in series, students will find several solutions to each assigned project. We’ll work on wood, paper, and other surfaces, and we may use watercolor, gouache, and oil paint with encaustic, as well as graphite, charcoal, and found objects. Although this class is centered on the combination of encaustic and mixed media, encaustic is not a requirement for all projects. All levels. Code F00D

Jane Wells Harrison, image of work
from her Instagram feed

It’s the last day of the session and I need to find Orly Wexler in Upper Metals. When I get to the studio, Orly is gone. “She left at 5 am to catch her flight,” says the instructor, Lawrence Woodford. He sighs. “Her work was so beautiful.”

Dang. Two weeks at Penland can go quick–just when I get used to people being here, they’re off. Next on my list to track down for her story: Martha Todd in lower Clay.

Martha, recipient of a Penland fellowship through the Crafts Council UK, has been blogging about her Penland experience in Thaddeus Erdahl‘s workshop. I would like to meet and interview her for the blog before she leaves. On the porch of Lower Clay, the busts the class has made are out: cats, humans, animals grand and strange. I find Martha’s bust–a dog–but no Martha. Someone tells me that she’s headed toward the coffee house wearing a pink shirt.

When I get to the coffee house, there are three women with pink shirts. Dang again. Here’s an occupational hazard of working in the Penland communications office during the summer: the cast of students and instructors changes in a flash. Too many luminous people to chase. Too many names. They appear, make art, and then leave us. To complicate matters, people reappear with steady frequency. My brain hurts.

I approach a familiar woman in pink near the creamer and ask if she’s Martha Todd. “No,” she smiles warmly, “I’m Mary.” It isn’t until later that I realize she’s Mary Zicafoose, textiles instructor and maker of the brilliant-colored tapestries I saw, days ago, displayed in Lily Loom.

I head to the wood studio for Show and Tell, a chance for all classes to display their work before heading home. The studio is packed. A sea of Penlanders crowds around tables. Shane Fero‘s flameworking students stand close to their dazzling pieces and organize trades. I sidle up to the table with forged steel works, and watch as a woman nearly stabs her arm on branches extending from an inflated steel form. Near a window, young James Haley escapes the dangers of crowds and art by playing with nesting cork forms made by someone in the cork design class. Hi, James.

I snap Elizabeth Brim‘s picture but it’s the wrong moment (another occupational hazard of my job: Pictures Taken at the Wrong Moment). Elizabeth is talking with a woman I’ve noticed all summer. She’s carrying Donna Tartt‘s The Secret History. “I’ll loan it to you when I’m done,” she says when I ask how she’s liking it. I should know her name. But at that moment Paulus Berensohn goes by, slow, like some unearthly snow king. And it’s true, you just want to watch him float.

I end up outside chatting with iron coordinator Daniel Beck and Adam Whitney. Adam looks very tired after captaining the metals workshop this session. He wants to fit in some of his own work before he heads back to Detroit. “You have Flutagon?” he asks Daniel, and I laugh because it’s true: the language of metals sounds like Klingon. “Yeah, you know, Flutagon, Atlantic 33,” says Daniel, jokingly, when I say that I’m about to totally tune out of their conversation.

Lately, I’ve been thinking about my job at Penland as “chasing Penland.” I chase people. I ask them what they do and listen. But in the summer, I’m more like a slipping glimpser. I take a last pass around Show and Tell. Shoemaker Malika Green in bright orange pants, saying goodbye. Nearby, a woman packs up the board game she made in Julie Chen‘s class. The table is thinning out. One of the remaining board games displayed is by studio assistant Isabel Duffy. “In process,” reads a sign. It’s impossible to tell what the game is, or if it’s even meant to be played, and one of the face-out cards reads:

If possible, forgive anyone who is upset that time alone is still necessary and desirable. After the long countdown and anticipation of return, intimacy is one of the things that cannot be pulled out and expected to unfold without creases.

It’s a shock to read this here, at Show and Tell: a quiet and difficult thought about one’s need to make art.  Isabel’s words suddenly make the whole thing emotional: how fleeting Penland time is for our students and instructors, who have left their cities and homes and respective intimacies to come here and work like total maniacs.

Everyone starts to trickle toward the Pines for lunch. In a corner, instructor Evie Woltil Richner kneels with a portfolio of her prints. They spill out on the floor. I try to photograph what’s happening: Evie showing her prints to Tiffany Dill‘s young daughters, and asking them which ones they like. This one? Maybe this one? Interest is expressed. Evie stops. “I’ll trade you this for one of your drawings, okay?” The deal is sealed.

Yes, the world is not all magic and pure exchange. But sometimes it is.