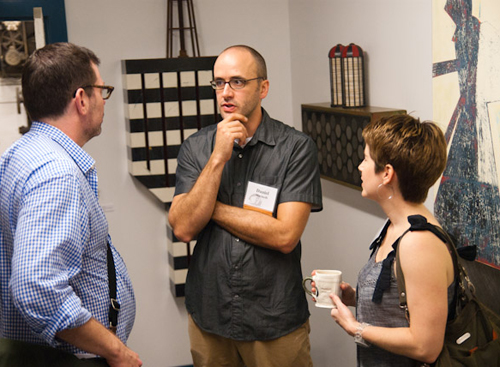 During his Penland residency, sculptor Daniel Marinelli rediscovered painting. It had been his childhood and undergraduate focus before he was lured into the third dimension, first by clay, then wood and metals. “I grew up near Chadd’s Ford, in Pennsylvania, and the Wyeth family – N.C., Andrew, and Jamie – Howard Pyle, Frank Schoonover, and the whole Brandywine River school, all of those painters really had an influence on me growing up,” he recalls. “I wanted to be a painter.”

In college at Bob Jones University (“It’s got a reputation,” he admits. “Very conservative. They had a demerit system, and you had to wear a tie every day, until lunch. Then you could take it off, and put on sneakers. I met my wife there, and it was a good education. No regrets.”), Daniel started out studying painting and drawing. An elective class in clay spurred him to change his major, and, after a few post-college years spent at work and in clay residencies, he pursued an MFA in sculpture at East Tennessee State University. By then, his interests had moved away from ceramics. Though he took a few clay classes along the way, his graduate work focused mostly on metal and wood.

Impressed by research into the work of past and (then) current Penland resident artists, Daniel applied to the program, determined not to see his studio practice wither after finishing school. “I was in a situation where I was working all kinds of jobs to support my family, not making any art, not having any equipment or tools,” he recalls. “I wanted to continue to make, and it seemed like a really good opportunity to focus for three years.” Arriving in his new space, he was confronted by the need to begin working there immediately, even as he figured out how to equip it for the requirements of his precisely machined mixed-media sculptures.  “The paintings and drawings sprung from coming here with nothing and having to make something. I’d gotten really spoiled, using school facilities and other people’s shops,” he says,  “but I didn’t want to sit idly until I could buy equipment, so the flatwork came back. Necessity is the mother of invention, right?” 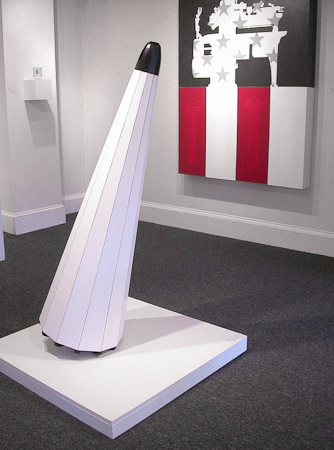 Like his sculptures, Marinelli’s new paintings have a machine-shop aesthetic, showcasing his love of tools, diagrams, and fabrication techniques. Giant screws, bolts, and fittings are flattened into plan-like cross sections, alongside miniaturized automatic milling machines. The forms are precisely rendered, but with enough roughness of texture and surface to assert the presence of the artist’s hand and clearly reference the images’ industrial origins.

Over the last three years, painting and drawing have become nearly half of his studio practice, a happy development he credits to the circumstance of his Penland residency. “If I had gone straight into teaching, or into somebody else’s shop,” he muses,” I would have just continued to make sculpture and that would have been it. I’m grateful for having been forced back into doing flatwork. It’s a nice break from the physical demands of sculpture, it’s cheap, you don’t have to invest in a lot of tooling and materials, and it’s easier to sell.” One suspects a bit of wish-fulfillment at work in Daniel’s creative solution to his practical problem – drawing the machines he was saving up for, painting pictures of the pieces and parts he could eventually use them to make. Also a brilliant bit of virtuous-cycle entrepreneurship, as sales of the paintings did, in time, underwrite the purchase of expensive machine tools.

Nearing the end of his residency, Daniel’s current plan for the future involves opening a fabrication shop, both for his own work and others’. “I want to find a situation where I’m making art, making objects, painting, and utilizing the tooling and equipment I’ve invested in, but not exclusively for my own stuff,” he says. “I wouldn’t mind if it turned into a general job shop, where people come in who need something built, or made, or fixed, and I work on that. I’m seeing that now as a way to make my bread and butter, and then I could also utilize the space to create. I want to continue using my hands to make stuff.”

You can visit Daniel Marinelli’s website by clicking here.

You can click here to see work by Daniel and Penland’s other resident artists in “The Barns 2011” at the Penland Gallery.

You can click here to find out more about the resident artists program at Penland.

Instructor Micah Evans working on an elaborate vase (there really is a vase in there) in the flameworking studio. 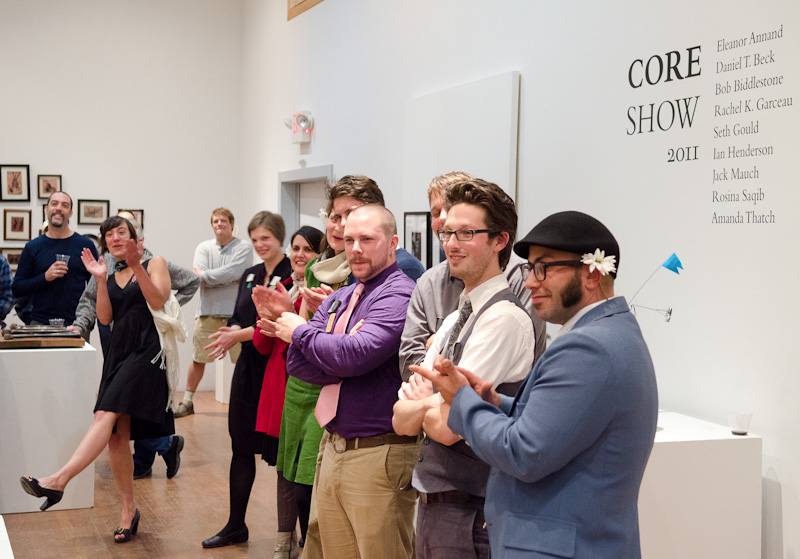 The annual exhibition of work by Penland’s core fellows was beautiful, inspiring, excellent. Click here for a slideshow from the opening on October 14 plus a selection of images of the work.

KS: You work under the studio name Huldra Press, which your website describes as a woman with a fox’s tail who lives in the woods. Much of your work carries a sense of the hybrid dream world evoked by this name. In what ways do you find yourself “inhabiting” this world as you create?

MD: I’m an only child and am lucky to have grown up in a time and place where I was allowed to roam around my neighborhood freely and alone. I spent a lot of time doing what children do if left to their own devices: making potions out of onion grass and mud, creating games to entertain myself, and just exploring. I made up entire worlds, complete with geography and story lines, and I drew maps and portraits of the characters to keep as a reference for myself. I remember pretending the roads were rivers, and almost seeing it in front of me. In recent years, I’ve become very interested in folklore and mythology, especially Scandinavian folklore. What fascinates me about these stories is that they suggest there is a looking glass world that overlaps our own. A part of me still believes in it, I guess….

You can read the full interview here and/or purchase a copy of Trachodon 3 here.

Core fellows Jack Mauch, Daniel Beck, Ian Henderson, and Seth Gould putting the finishing touches on the annual exhibition of work by our core fellows. This year it’s at Northlight. The opening reception is on Friday, October 14 from 7 – 10 PM. The work will be up until October 21. 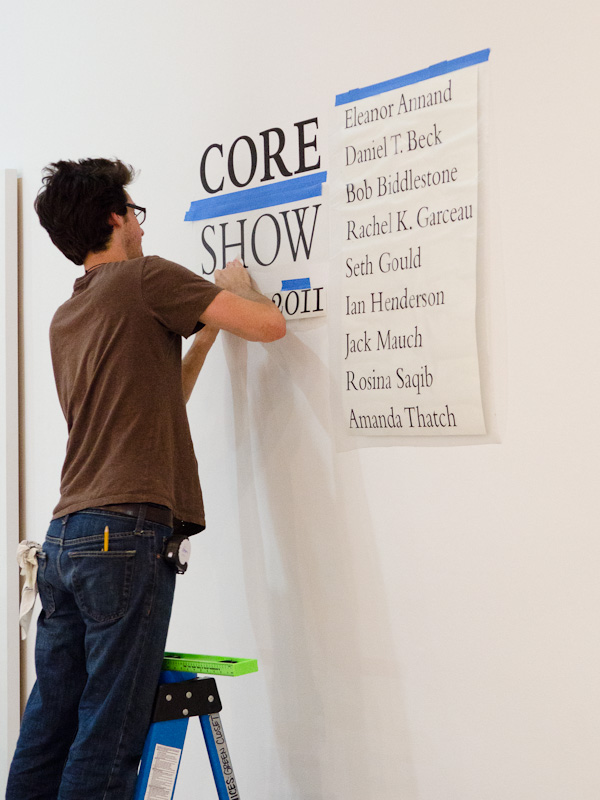 Please come and see this beautiful exhibition of work by our wonderful core fellows.