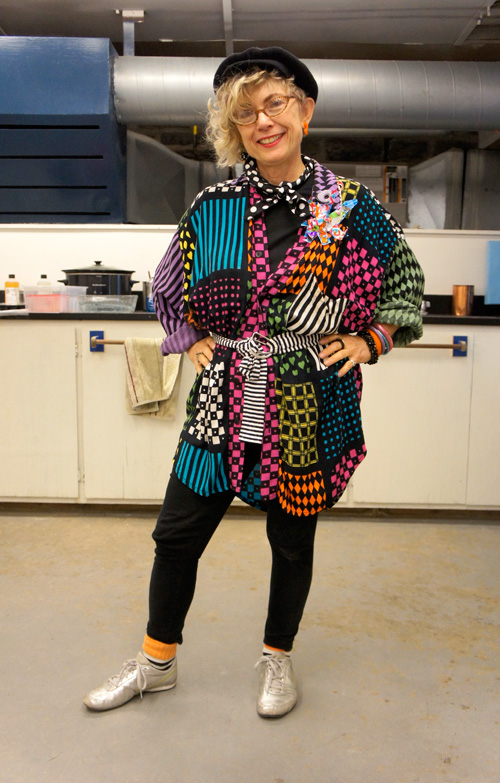 Sandie Zilker, from Houston, Texas, co-teacher of Colormania: Hue & You, a one-week workshop in lower metals. 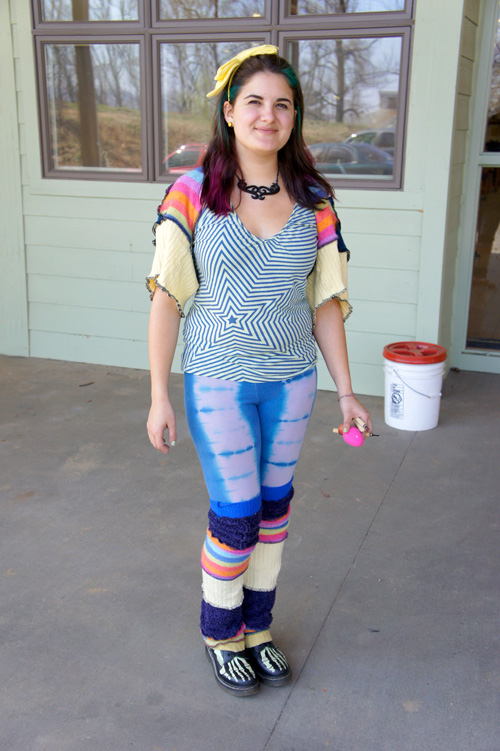 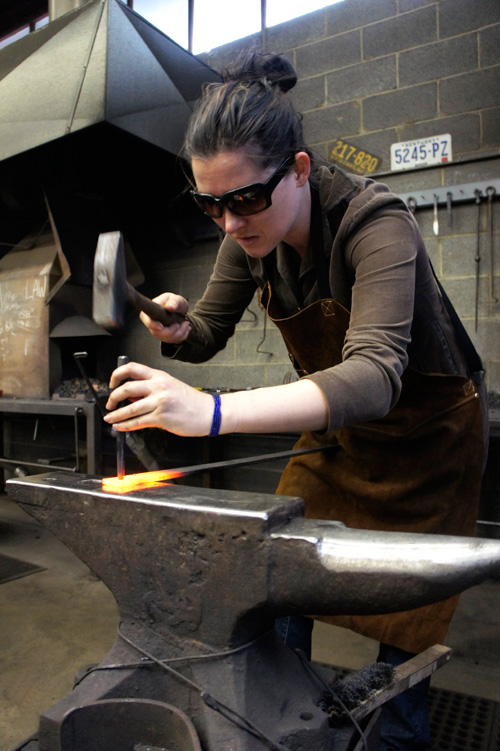 Amanda Murdaugh wasn’t thinking about taking a class at Penland this spring until her mother, who was planning to enroll in Janice Farley & Jane Peiser’s ceramics workshop, Festive & Functional Colored Porcelain, suggested that she join her. Amanda said she would if she could get into her first-choice class, Miss Betty’s Red Hot Variety Show, an iron course taught by Elizabeth Brim. When her application for a work-study scholarship in that workshop was accepted, she signed up.

It’s Amanda’s fifth class (three concentrations and two summer sessions) at Penland, and her first in a studio other than metals. So far, she’s come as a work-study student every time; this spring she’s assisting the weekend prep cooks in the kitchen. “I like the work-study program,” she says, “I’m used to it. It’s hard to imagine doing something else. I’d feel guilty, almost, being here and not helping at this point.” Her drive to help out behind the scenes as well as working in the studio may come in part from volunteering at the annual benefit auction for several years before she took her first class. This began as a family affair – her mother has been taking classes at Penland since the 1970s and is herself a long-time auction volunteer; Amanda started coming with her about seven years ago. After a couple of auctions, she began enrolling in classes as well.

“The first time was on a lark,” she recalls, “I was at the auction, and they had spaces open. I only had three days worth of clothing, because I just came for the auction. At the last minute, I was like, “Okay!” so I pulled my luggage out of the car, and I stayed, and that was my first class here.” The year was 2005, and the class was Alternative Anodizing, a workshop taught by Thomas S. Madden in the metals studio. It focused on using anodized aluminum in small-scale metalwork, and appealed to Amanda’s growing interest in jewelry.

A native of Charleston, SC, Amanda had lived in New York City for a couple of years around 2004, working as an intern in the studio of a fashion designer. Though she still remains interested in fashion design, it was during this time that she started making jewelry, which has been her primary medium for creative output since, picking up leftover bits of material around the studio and beginning to shape them into body adornments. “He was a fetish designer,” she says with a grin, “so there was a lot of leather. I started working with the scraps. That’s where I discovered jewelry.”

Asked why she’s changed media in her choice of class this time, she explains that there are other ideas she wants to explore right now, physically larger projects including an iron room-dividing screen. “Jewelry can be limiting,” she says, “often in a good way, but limiting. I wanted to try something different.”

Back at home in Charleston, Amanda works as a bartender, “on and off,” as she puts it. “It pays the bills, but I’m not sure I have the temperament for it. I can have it for a while,” she reflects,” but not forever.” When she finishes her class in May, she’s planning to rent a studio space and begin pursuing jewelry-making more seriously. That’s why she keeps coming back for classes at Penland, she says. She has a a lot of passionate interests – psychology, neurobiology, fashion and costume design, animal behavior – but hasn’t yet made a career of any of them, and studying jewelry has been in part a way of testing to see if that could be her true vocation.

We hope she keeps coming back, whether it turns out to be or not. 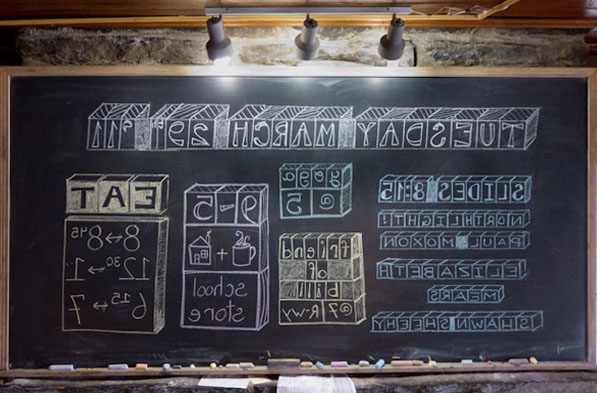 This is today’s chalkboard in the Pines dining hall. It was drawn by core fellow Rachel Garceau in honor of this week’s letterpress printing class, where students have been spending a lot of time spelling backwards. 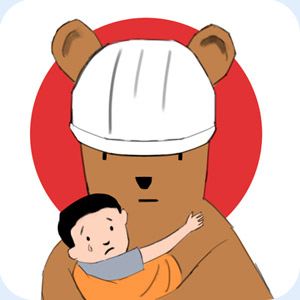 In the wake of the recent devastating earthquake in Japan, ceramic artist and Penland instructor Ayumi Horie has mobilized an online fundraising effort by the studio ceramics community to contribute to desperately needed relief and aid missions. With the help of her friends Ai Kanazawa Cheung and Kathryn Pombriant Manzella, she has organized Handmade for Japan, an online auction of unique, handmade art generously donated by talented artists and their galleries and collectors throughout North America and Japan. Handmade For Japan aims to raise over $50,000 and all of the net proceeds will be donated for GlobalGiving’s relief efforts in Japan.

Click here to go to the Handmade for Japan auction site on Ebay Giving Works.

The site will appear empty until the auction begins. A preview of auction items is available on the Handmade for Japan Facebook page (click here to visit).

The auction includes work by such ceramics luminaries as Jun Kaneko, Toshiko Takaezu, Shoji Hamada, Warren Mackenzie, and Betty Woodman, and by a number of Penland-affiliated artists, including Jana Evans, Michael Hunt and Naomi Daglish, Matt Kelleher, Michael Kline, Shoko Teruyama, Ron Meyers, SunKoo Yuh, among others. We applaud their generosity, and Ayumi and her co-organizers’ vision and compassion, and encourage everyone to consider giving their support to this worthy cause.

Penland resident artist Amy Tavern is beginning work on a new body of work, intended for her first solo show, this November at Velvet da Vinci Gallery in San Francisco, and has launched a fundraising effort on the USA Projects micro-philanthropy website to cover the cost of materials.

From her project proposal:

I believe personal content that stems from my own experience is the key to creating innovative, thought-provoking work….

…The jewelry that has come in and out of my life over the years has had a profound affect on me, and ultimately, fueled my desire to be a jeweler. These special pieces, like the heirloom contents of a jewelry box I played with as a child or the ring that changed my perspective on how jewelry is made, form my history…..

…This personal history or memory will serve as my guide for two series of new works. I will create through today’s eyes the contents of a nostalgic jewelry box and respond to experiences with significant jewelry. These new pieces will abstractly represent the originals as interpreted through my formal vocabulary.

Amy views this show and the body of work she will create for it as the culmination of her residency. During her time at Penland, she explored her studio practice and discovered a stronger artistic voice, experimenting with technique, process, materials, and design to develop a more robust formal vocabulary and aesthetic, which she now intends to put to use expressing more personal and concept-driven concerns. She is seeking funding to allow her to achieve her vision for this work without having to sacrifice the number of pieces or the types of materials available to her.

If you would like to read Amy’s full proposal, watch her video, and consider supporting her new body of work, you can click here to visit her USA Projects site.

For more information about Amy Tavern, her artwork, and her studio practice, you click the links to visit her website or her blog. 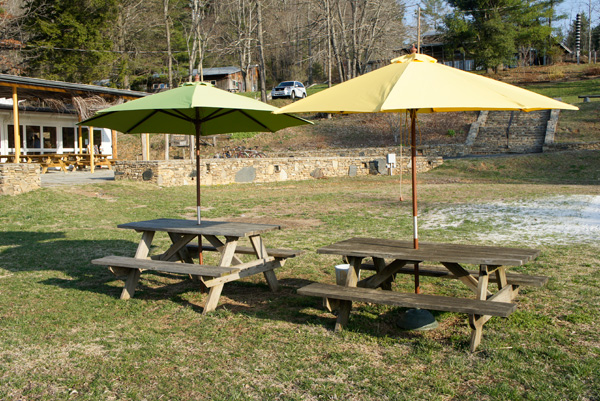 These colorful new umbrellas appeared on campus just in time for the first week of spring. Crackerjack! 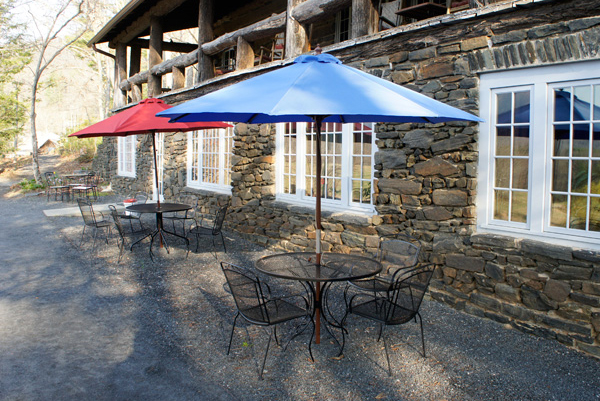 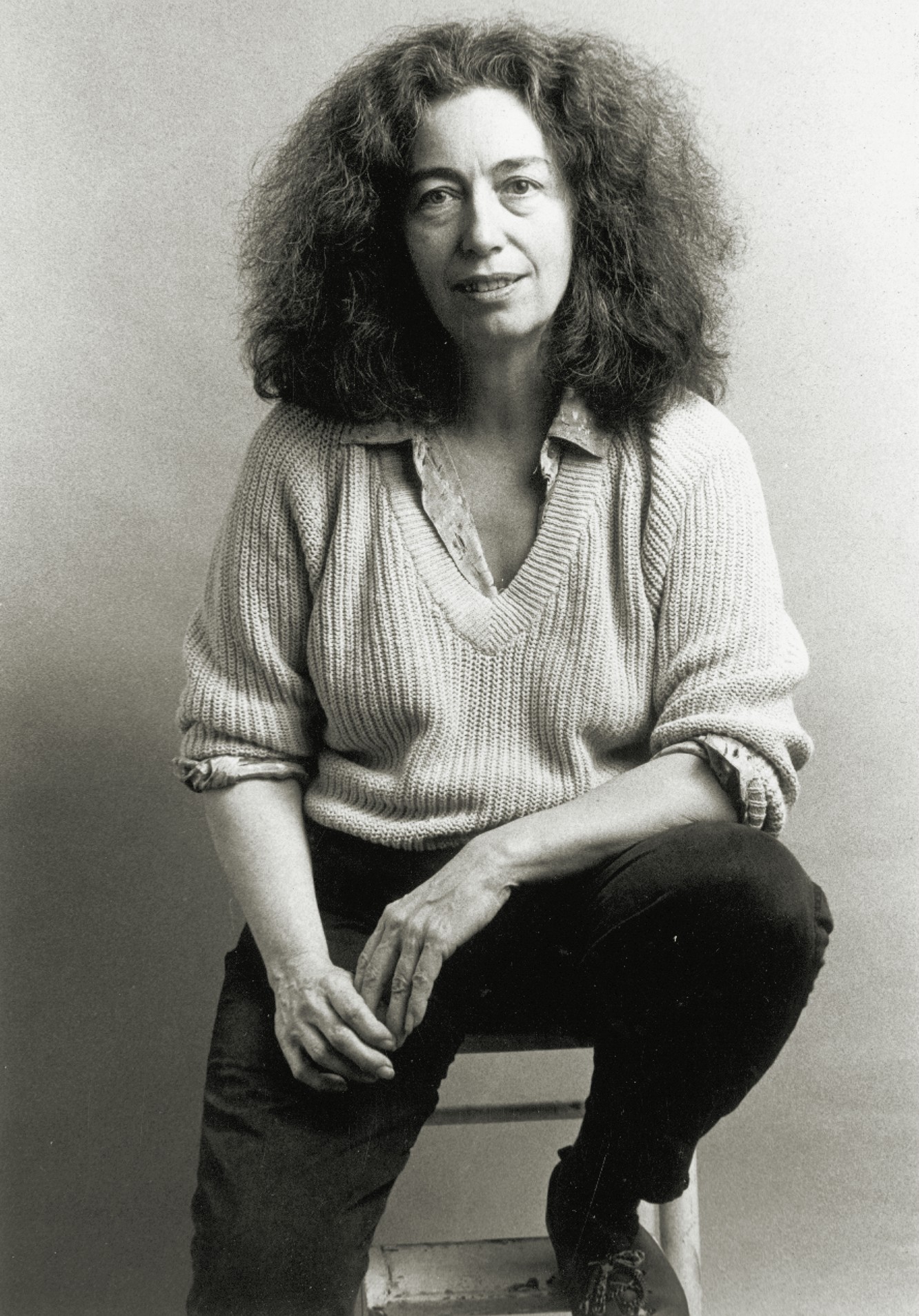 Buddha in a birdcage, Buddha on a plate,
Buddha stuffed with rags in a reliquary state,
Buddha under glass in a red metallic shroud,
Buddha wrapped in paper, twelve times on twelve shelves,
Buddha in the sketchbook, Buddha in the words,
Buddha as the first name of the ex-husband of a hairdresser from Burnsville named Priscilla,
Buddha as a friend of friends who study on his ways,
Buddha as my uncle, noodling in my dream
on an ever-dwindling chopstick held between his knees,
Buddha on 109th street, leaning out the window on a red pillow in a red brassiere,
Buddha as a child’s shoe, washed up on the beach,
Buddha as the chicken I ate last night,
Buddha as a line drawn, followed, and erased,
Buddha as the case I make for nothing, a space,
Buddha sitting shiva, Buddha kicking ass,
Buddha watching TV, Buddha cutting grass.

– Buddha in a Birdcage, by Betty Oliver 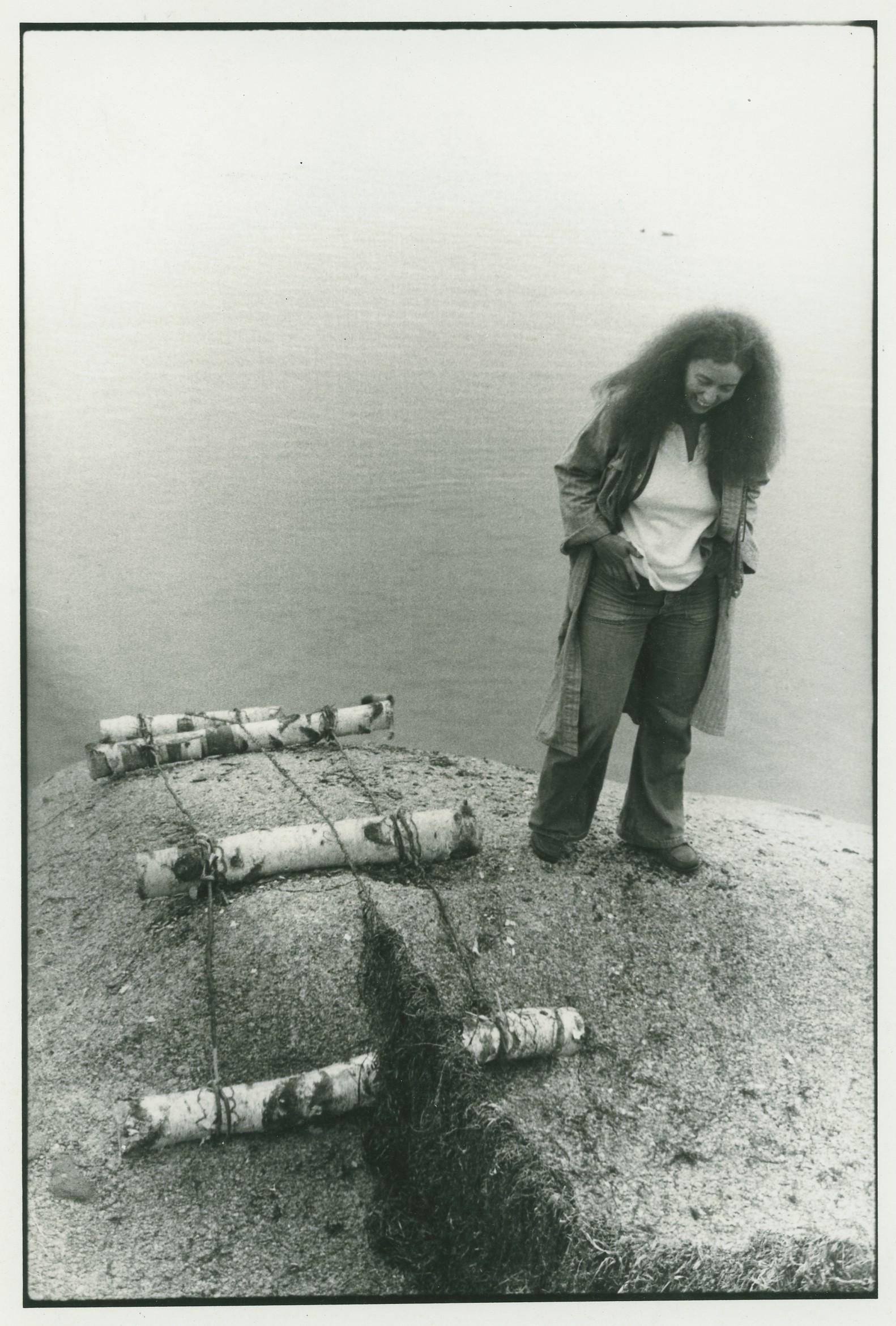 The goal of this project is to publish the poetry of Betty Oliver, a New York artist and poet who passed away in October, 2000, after an extended battle with breast cancer.  When Betty died, she left all of her creative work in the care of Burnsville, NC glass artists and Penland instructors Billy and Katherine Bernstein. An accomplished mixed-media sculptor, Betty began to write and perform poetry around 1990, and created a powerful body of written work. Though she performed her poetry quite actively at New York venues such as Dixon Place and the Knitting Factory, her work has never appeared in printed form.

As a poet, Betty was an engaging and compelling performer, often beginning readings by fighting her way out of a giant paper bag. As a teacher, she was very effective and sought after, and led many classes and workshops, primarily here at Penland and at Haystack Mountain School of Craft on the Maine coast. The book will be edited by Haystack director and poet Stuart Kestenbaum, designed by Robin Dreyer and Leslie Noell of Penland’s communications office, and marketed jointly by the two schools. Any profits from the sales of Betty’s book will be given to the scholarship funds of Haystack and Penland.

As with all USA Projects, the Betty Oliver Poetry Project must reach its monetary goal by a self-chosen deadline (June 6) in order to receive any funding. If you’d like to read the project proposal, watch the video, and consider supporting the project, you can click here to visit the project page at United States Artists.