January print resident Dustin Farnsworth is having a pretty good year. He earned his BFA in woodworking and functional art, with a minor in printmaking, from Kendall College of Art and Design in May, and won a Windgate Fellowship, which he’s using to move to Asheville and work for three or more established makers in wood and steel over the course of a year – the grant money pays his way while he gives his labor to the artists. So far, the established makers he’s assisted have been Stoney Lamar, for whom he fabricated steel components in preparation for a lifetime achievement award show at SOFA, and Brent Skidmore, for whom he built 13 mirrors. In the spring, he’ll be working on large-scale furniture pieces with Sylvie Rosenthal.

To feed the print-centered side of his artistic life alongside all of this three-dimensional work, he’s also made time this year for a short printmaking residency at Kendall (in Grand Rapids, Michigan), where he assisted a class, and for Penland’s two-week January letterpress residency. “I’m pretty balanced between woodworking and printmaking,” he says. “I have a hard time distinguishing between the two. Mark-making is the thread that runs between both.”

The Penland residency was Dustin’s first opportunity to work in letterpress. He’s always been fascinated by the letterpress as an object – the machine, the wood type, the history of the medium – so he was excited to get to use one. “It’s all so beautiful,” he enthuses. “There are lots of kinetics in my sculpture; it’s very gearhead influenced. Letterpress is a good combination of that and printing.”

Dustin also enjoyed the chance to work more on just one thing at a time than ever before. He arrived with a very specific plan for his work, which he then veered away from unexpectedly as the two-week residency progressed. “It’s phenomenal to to be stuck in the mountains in the middle of nowhere and still be able  to work 16 hours a day,” he reflects. He’d like to come back next winter and rent the studio for a longer period. Between now and then, it’s back to Asheville to carry on with the next phase of the Windgate project. He’s also applied for a residency at Arrowmont, and will be teaching two classes this summer at Princeton Secondary School in New Jersey. He’ll have work in a group show at Blue Spiral 1 over the summer and will show there again in a split exhibition next January. “I have a lot of work to do before then,” he says.

You can learn more about Dustin and see pictures of his work by clicking here to visit his website. 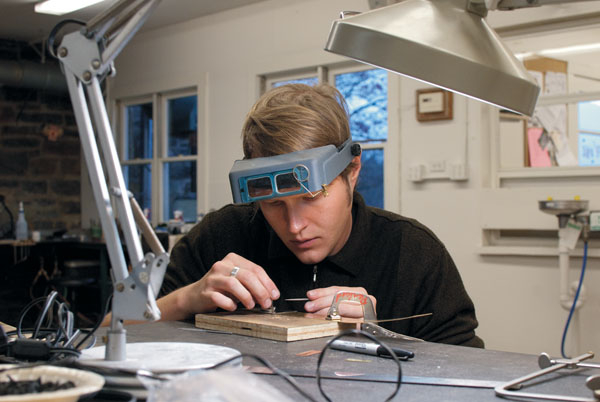 The Betsy and Marc Rowland Scholarship Fund provides one full work-study scholarship for a student in a summer metals or clay class. Betsy is the sister of Penland trustee Polly Allen, has taken several workshops in metals, and is a frequent Benefit Auction attendee.

The Glass/Apple Scholarship Fund offers a full work-study scholarship to a summer student from Rockingham County, NC. It was endowed by Ed and Sue Glass of Cornelius, NC, in partnership with the Apple Foundation.

For more information about these and other Penland scholarships, applications, and class offerings, click here to visit our website.

Our heartfelt thanks to Betsy and Marc, Ed and Sue and our friends at the Apple Foundation, and to all of the generous donors who make Penland’s scholarship opportunities possible. 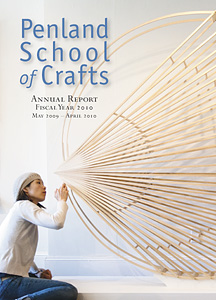 Penland’s annual report for fiscal year 2010 is available for downloading from our website.

It’s with a little pride and a lot of joy that we get to tell the world about the cool stuff that goes on here, and the astonishing creativity and generosity of the people who make Penland a part of their lives each year. So have a look, and then give yourselves a hand. They’re your stories. 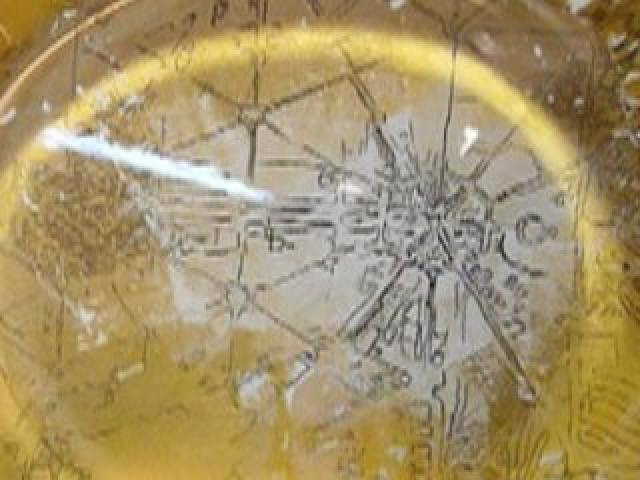 Jennifer Bueno, a mixed-media sculptor and former Penland resident artist, is fundraising on USA Projects for an upcoming installation at The Annex in Raleigh, NC. Her project, Remotely Sensing, is based on the out-of-body feeling generated by observing the earth via satellite images:

…Recently, I’ve found myself engrossed in satellite images. Though these images are created by data gathered directly from our planet, they seem otherworldly.  Their false colors are created by gathering specific frequencies from the spectrum that give an alien glow, and when you think about it are really only “false” to our species who see a limited number of frequencies.  And yet they are accessible. In the terrain I can identify a river, a mountain, a city; viewing the earth at a certain distance creates an odd sense of knowing place.

I would like to create a body of work that ruminates on how these now ubiquitous images affect our perception of place.  I see this body of work as a focus of my exploration of awareness within the context of experience. Some of these satellite images invoke an out of body feeling similar to a kind of ”spirit projection”.  For me looking at these images creates a distance in time between myself and the place that I see. They create a magical change that I am extremely excited about. It is our home becoming something else….

If you’d like to read Jennifer’s proposal and perhaps consider supporting her project, click here to visit her USA Projects page.

You can also click here to visit Jennifer Bueno’s website, to learn more about her other artwork.

We’re grateful and pleased to announce a new scholarship opportunity at Penland this year – the Larry Brady and Edward Jones Scholarship Fund, which provides one work-study scholarship for a summer class. This endowment fund was established by Dr. Larry Brady, with friends and family, in memory of his partner, Edward K. Jones, a real estate broker at Dickens-Mitchener and Associates, and a well-known DJ at events and clubs in the Charlotte area. A devotee of beauty and patron of the arts, Edward loved Penland and had a strong desire to support artists. He passed away in July.

Together, Larry and Edward visited Penland often; they were students, passionate, avid collectors of Penland artists, and longtime auction patrons. “Ed loved going to the student show on the day of the auction,” Larry recalls. “He enjoyed the incubation of artists that happens there. What we cherished most was the relationship between the artists, the work, and ourselves.” Of the scholarship which celebrates his partner’s life and passion, Larry says, “We wanted to give someone who might not have the opportunity a chance to go to Penland. We wanted to let them interact with all the media, to meet and interact with other students from all over, to be in that phenomenal environment where there is so much talent and beauty.”

For more information about this and other scholarship opportunities at Penland, click here to visit the scholarships page on our website.

Family Finance: A Gap Year Need Not Break the Bank, an Associated Press article that’s been picked up by several online news magazines, features Sofi Hernandez-Crade, a student in Brian Ransom’s Throwing Strange & Unusual Forms class in fall concentration 2008, talking about her time at Penland during a “gap year” between high school and college. With a  work-study scholarship and savings from a summer job, Sofi made a Penland workshop part of her year of experiential learning while she took the time to figure out what would come next.

” …WORK AND STUDY
Sofi Hernandez-Crade applied to a few expensive art schools during her senior year in high school in Woodland Park, Colo., but she knew long before her 2008 graduation she wanted a year off first. Her mother, Mary Crade, supported the idea, having taken some time before completing her own undergraduate degree: “She just didn’t seem ready for college.”
Hernandez-Crade was drawn to programs offering experiences like painting murals in South America, but the price tags were prohibitive. Such programs, often run by nonprofit organizations, typically do not pay or cover living expenses. “It was really sobering to realize that,” she said.
After saving money from working as a waitress, she enrolled in an eight-week program at Penland School of Crafts in North Carolina’s Blue Ridge Mountains, where she studied sculpture….
“Penland was eye-opening,” she said. “It was extremely inspiring, and a wonderful experience being in a community of artists…”

Note: The article refers to a Penland concentration costing about $7,500, however, Sofi attended with a work-study scholarship (including room and board), which would have put her tuition cost at around $2,900. 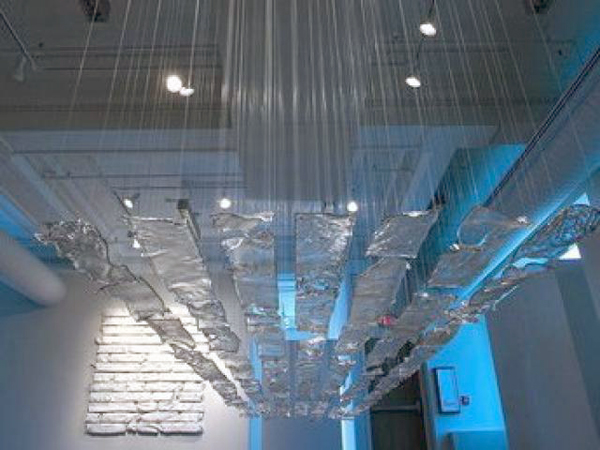 Congratulations to former Penland resident artist Ila Prouty, who has met her funding goal for Dream Repeater: Boat Sinking on USA Projects a few days ahead of her deadline! The structure of USA Projects’ micro-philanthropy site allows her to continue raising funds above and beyond her original call until the end (11:59 pm) of Monday, February 7.

Ila’s Dream Repeater project involves physically realizing an image she collected in a logbook of dreams as a sculptural glass installation. “In the dream, the dreamer is swimming underwater,” she writes. “They turn on their back as they swim and look up though the water to the peaceful hulls of boats overhead. Light streams through the water as the boats and the dreamer float.” Any funds she raises beyond her original project budget will be used to expand the scope of the installation.

If you would like to read her proposal and/or consider helping her with funding, click here to visit her page on the USA Projects site.