Former Penland resident artist Vivian Beer is an innovative furniture designer/maker based in Massachusetts. She will be an artist in residence at the State University of New York at Purchase from mid-January through the the summer. She is using the USA Projects micro-philanthropy site to raise funds for producing new work during this residency.

The funds she’s seeking will help her buy materials such as aluminum, steel, stainless steel, architectural components, and automotive paints. She’ll also be using the money to experiment with industrial processes including laser cutting, machine rolling, hydraulic press forming, and powder coating. She feels that experimenting with these processes will allow “lateral growth” in her work.

Vivian’s project will only be funded if at least $9,000 is pledged by January 5. If you’d like to read her proposal and/or consider helping her with funding, visit her page on the USA Projects site.

The Arts & Culture blog of The Wall Street Journal recently featured a piece about frequent Penland instructor, former trustee and resident artist Christina Shmigel, whose sculptural installation, “A Foreigner’s Cabinet of Chinese Curiosities,” will be on display beginning January 21st at the Bruno David Gallery in Saint Louis, Missouri. Living in Shanghai since 2004, Christina has assembled an artful collection of objects she will forever associate with her time in China. The article discusses her process and inspirations for creating the work, and includes a slide show of treasures from the cabinet. Check it out:

In Shanghai, A Curious Cabinet

Sometimes what a visitor remembers best about China isn’t the Great Wall or the Palace of Heavenly Purity in the the Forbidden City, but something mundane, such as a politically incorrect toothpaste tube.

Enter American artist Christina Shmigel, who has lived in China since 2004. In her latest work, “A Foreigner’s Cabinet of Chinese Curiosities” Ms. Shmigel captures the everyday things that best portray Shanghai.

The work — which is displayed in an old curio cabinet with 67 drawers — features ordinary household items, some of which Ms. Shmigel thinks will become tomorrow’s castoffs: festival decorations sit next to a drawer of boxes of the White Cat brand of detergent and infamous tubes of Darlie toothpaste, which features an illustrated logo of a black man with white teeth…

“As with so much in Shanghai,” says Ms. Shmigel, “as soon as you form an attachment to something, it’s likely to disappear.”

And be sure to check out Christina Shmigel’s website and the details of her upcoming show in Saint Louis as well. 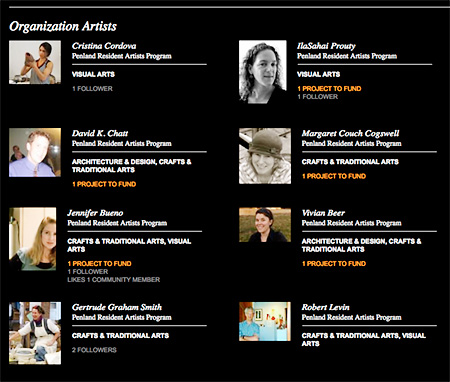 Many of the participating artists have been winners of the organization’s USA Fellowships, but the sponsors have also created a group of “project partners” to help them identify and recruit artists. Along with Penland, these partners include organizations such as Creative Capital, the Pollock-Krasner Foundation, and the Andy Warhol Foundation. Through this aspect of the program, a group of current and former Penland resident artists have been invited to participate.

USA Projects invites artists to propose specific projects along with a budget for their completion. These are posted on the site and supporters are invited to pledge money toward projects that interest them. Each project has a time frame of 4-8 weeks in which to generate pledges, and the money is collected only if the entire amount is pledged. The artists also offer specific benefits to people who contribute.

The Penland artists who already have projects up for funding through the site are David Chatt, Jennifer Bueno, IlaSahai Prouty, Margaret Couch Cogswell, and Vivian Beer. Three other artists–Cristina Cordova, Gertrude Graham Smith, and Robert Levin–have created profiles on the site, but have not yet listed projects.

If you would like to read about these projects (and consider helping fund them) or you want more information about USA Projects, visit the Penland organizational page on the USA Projects website.

Good heavens! This fantastic piece is by Italian blacksmith Claudio Bottero, who will be teaching an advanced class in the iron studio next summer. We are hard at work on the catalog for next summer. It will go out in the mail and hit the website around January 1. Meanwhile, you can download a semi-final schedule here.