This week’s edition of Fareed Zakaria’s CNN program Fareed Zakaria GPS was titled “Restoring the American Dream.” It included these remarks from Zakaria:

I’ve written on some of these issues, as has Tom Friedman in his mega bestseller, “The World is Flat.” And I put this together with some of his ideas in mind.

Second, go local. Do something that can’t be outsourced, jobs involving personal face-to-face contact will never go to India. You cannot get a janitor, an electrician, a maintenance engineer, a fireman, a physical trainer, a garbage collector, a dentist, a nurse or an interior designer to work for you from India.

Can everyone become indispensable? Well, no, but if you learn a difficult craft and are good at it, if you can collaborate well, synthesize well, put things together, work with others and work well across countries and cultures, you will have a leg-up.

He goes on to say that languages and math are also skills that will create opportunity in today’s economy.

Follow this link to see the show or read a transcript. 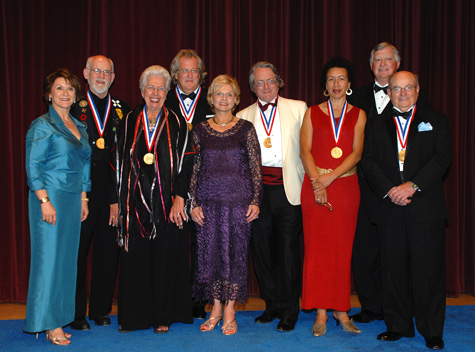 Belated congratulations to our old friend (and many-time Penland instructor) Bob Ebendorf (second from left), who earlier this month was given the North Carolina Award–the state’s highest civilian honor. The awards are given for outstanding achievement in art, literature, public service, and science.

Here’s what the Department of Cultural Resources press release said.

Master metalsmith, jewelry designer, and one of the leaders in the burgeoning crafts field, Robert Ebendorf brings distinction to North Carolina through his creative combination of traditional materials and found objects.  Ebendorf fashions his widely collected works from broken bits of Formica, crab claws, lost keys, and rusted bits of metal.

Born in Kansas in 1938, Ebendorf recalls that his mother took him to weekly arts and crafts sessions in Topeka where he glued together shells and wrapped string around wine bottles.  His father took him to visit his grandparents, laboring away in their tailors shop, setting for him examples of craftspeople doing precision work that would adorn the body.  His formal education came at the University of Kansas where he received bachelor’s and master’s degrees, and in Norway as a Fulbright Fellow and where for a year he studied jewelry design courtesy of a grant from the Tiffany Foundation.  In 1969 he was a co-founder of the Society of North American Goldsmiths.

Ebendorf is an artist who works intuitively, learning in a primarily visual way when he turned his dyslexia, which remained undiagnosed until college, to advantage.  His work has taken him to teaching posts at Stetson University, the University of Georgia, SUNY-New Platz, Guest Professor at the University of West England, UK, and since 1999, at East Carolina University, where he is the Carol Grotnes Belk Distinguished Professor in the Department of Art.  He suggests to his students, whom he views as collaborators, that they enlarge their view of art.  Ebendorf has created necklaces, brooches, and even chairs, but considers his collection of crosses, using secular materials such as broken glass to create Christian symbols, to be among his strongest pieces.

Of  North Carolina, where he has taught at Penland School of Crafts since 1962, Ebendorf says, “What a wonderful state that seems to thrive in the old and the new, and the exchanging of ideas.” His work is recognized well beyond the state’s boundaries and can be found in the Metropolitan Museum in New York, the Museum of Fine Arts in Boston, Le Musee des Arts Decoratifs in Montreal, and the Victoria and Albert Museum in London.  It was been the subject of a retrospective at the Renwick Gallery of the Smithsonian and he has been honored by the 92nd Street Y Arts Center in Manhattan.

Bob Ebendorf and his wife, Aleta Braun, a painter and mixed media artist, live in Greenville.

And here’s Bob in his normal clothes, in an interview from last year (he has a lot to say about Penland).

Our program director, Dana Moore, just made this panoramic photo of a neighbor’s yard (she learned this technique in a Penland photo class this summer). Don’t bother looking at it in this small size. Click on the picture to see it bigger. 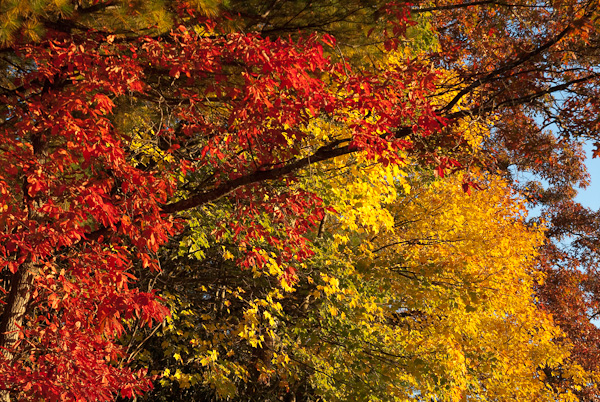 And not only that, but today we had basmati rice, curry, dal, raita, chutney, and rice pudding for lunch.

This weekend, Penland is hosting an American Craft Council “convening,” which is a small gathering of makers, teachers, administrators, and others involved with craft. They are discussing a variety of topics having to do with the field of craft as a whole–where it is, where it’s going. You might think this sounds a bit dry, but consider that the 4:00 PM session today opened with a participant spontaneously showing this video.

Applications for the Penland School of Crafts Resident Artist Program are due at Penland by Thursday, October 28.

The resident artist program seeks to enrich the total educational experience at Penland by providing a stimulating, supportive environment for artists at transitional points in their careers. Penland resident artists are full-time, self-supporting craftspeople who live and work at the school for three years.

As promised, a slide show of work from the Core Show 2010 at the Penland Gallery. See work by our nine fabulous core fellowship students. Go look now! (Photo by Dana Moore)