All of Wei’s pottery is functional and intended for daily use. His kitchenware is food-safe, as well as microwave and dishwasher safe.

Wei Sun was born in Nanjing, China and has been living in Raleigh, NC since 1998. He first discovered NC pottery around 2010. Soon after that, he started taking foundation classes at local art centers in Raleigh. Wei continued his ceramic studying on series of workshops with established potters such as Julie Olson, Marty Fielding, Sam Taylor, Mark Shapiro, Kyle Carpenter and Marsha Owen. He did his winter residency in 2018 at Penland School of Craft. In 2019 Wei did a 9-month apprenticeship under Marsha Owen. Also in 2019, Wei set up his pottery studio at home and became a studio potter.
Inspired by the Asian ceramics culture of his native region and the NC pottery tradition of his adopted home, Wei’s works strike a balance between artistry and functionality. He firmly believes that each aspect of a pot – shape and form, decoration, glaze, function – serves a purpose and contributes equally to the piece as a whole, no more and no less. 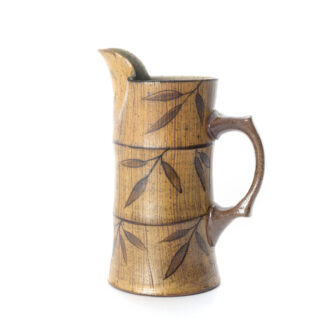