Shane Fero – Penland, NC
Shane Fero was born in Chicago, IL in 1953. Shane has been a flameworker for 50 years and maintains a studio next to Penland School in North Carolina. He participates in international symposia and conferences by lecturing and demonstrating. Fero is also an educator and has taught at institutions such at Penland School, Urban Glass, the Pratt Fine Arts Center, the Studio of the Corning Museum of Glass, the University of Michigan, Eugene Glass School, Espace Verre, Montreal, Quebec, the Pittsburgh Glass Center, Pilchuck Glass School, Bild-Werk, Frauenau, Germany, the International Glass Festival in Stourbridge, UK, Scuola Bubacco, Murano, Italy, Chameleon Studio, Tasmania, Taiwan, China, Australia, Turkey and in Seto, Osaka, and the Niijima Glass Art Center in Japan.

His work can be found in collections both private and public institutions worldwide. He has had over 33 solo exhibitions since 1992 and has participated in over 400 group exhibitions during his career. He has been honored with three retrospectives; a 30 year at the Berkowitz Gallery at the University of Michigan in 1999, a 40 year at the Huntsville Museum of Art in 2008 and at the Christian Brothers University in 2010. His work can be found in over 30 museum collections worldwide including the Museum of Art & Design NY, The Corning Museum of Glass NY, GlasMuseum, Denmark, the Asheville Art Museum, NC, the Huntsville Museum of Art, AL, the Museum fur Glaskunst, Lauscha, Germany, and the Nijiima Contemporary Glass Museum in Japan.

He is the Past-President of the Board of Directors of the Glass Art Society and received the Lifetime Membership Award from GAS in Chicago in 2014. Shane was honored in 2009 for Extraordinary Contribution to the Glass Art World, Salem Community College, Carney’s Point, NJ and received the Award for Significant Contributions to the Chinese Glass Community from the Hejian Government, Hejian, China in 2017. 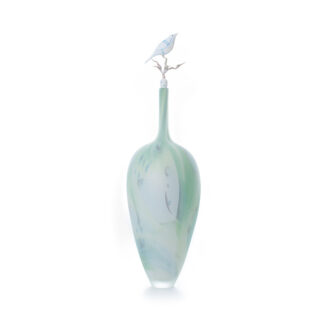