“Functional objects are tools we use every day of our lives; when these tools are individually made from elemental raw materials they bring us back to the earth – they serve as a grounding symbol.

My passion for the crafted object has come under scrutiny in these sculptures in an effort to re-evaluate its significance in my practice, and importantly its connection to humanity and the earth. Through the ascribed purpose and use of an object, the idea that form follows function becomes a way of life and thinking that utilizes observation in order to understand the cause and effect of things in the world

The feelings of anxiety and the joyful celebration of beauty are balanced in these sculptures. This exists in the process of making, where the “flow” of working must involve risk and has the capacity to push the material and skill to the verge of failure. It also exists in the encounter of the final piece where the impulse to engage the functional objects within the system, or to engage the system itself, is met by the consequence of doing so.

Making, using and presenting these forms is a constant reminder that we live with the earth, not on it.” -Leckie Gassman

Leckie Gassman – Annapolis, MD
Leckie Gassman was born and raised on the Chesapeake bay in Annapolis, MD. He received his BFA from Alfred University where he focused in glass and ceramics. After working production at Lexington Glassworks for four years in Asheville, NC he joined The Appalachian Center for Craft in TN for a year-long residency. He is currently traveling internationally, maintaining his practice through residence programs heading to Duncan McClellan Gallery in St. Petersburg, FL followed by Toyama Glass Museum in Japan.
Leckie comes from a family of engineers and lawyers based out of the north east. His glass work is rooted in functionality and references early Blenko productions while his approach to two dimensional work is less formal and utilizes the addition and subtraction of layers to create space and depth. In the glass shown Leckie has etched the surfaces of his glassware using an approach similar to his paintings. 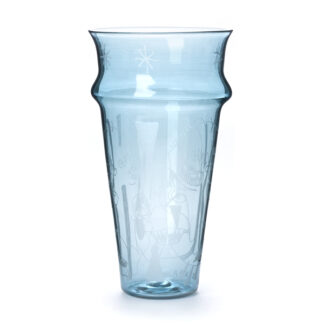