JAY RYAN
Self Worth

Jay Ryan learned about screenprinting from Steve Walters at Screwball Press in late 1995, where they worked together until 1999, at which point Jay started The Bird Machine print shop in the basement of his apartment building. Jay’s initial clients were his friends’ bands, his own band, and the clubs where they played. By stumbling into the right place at the right time, he fell in with a new movement of screenprinted poster makers across the country and around the world.
The business grew slowly and organically, with the gradual addition of printing assistants and an office manager. For five years, the printshop occupied a commercial space in the Ravenswood neighborhood of Chicago, before settling into a permanent home in quiet Skokie, Illinois.
Jay established a reputation for hand-drawn text and a computer-free design process. His prints aim to attain the same goals as other concert posters, but using raccoons and toasters instead of skulls, breasts and hot rods.
From 2002-2007, Jay served as Vice President of the American Poster Institute, a non-profit group which manages the successful FLATSTOCK series of poster shows.
Jay now draws and prints daily, and often travels to conferences and universities to show and speak about his work.
Jay lives in Evanston with his wife and daughter, one cat and one dog. 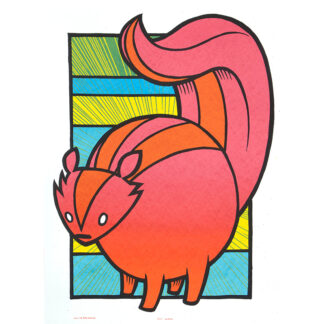