View cart “ERICA SCHUETZCork Brooch II” has been added to your cart.
Next > < Back

Dave sites Paul Evans as the inspiration for this complex neckpiece.

Paul Evans was an American furniture designer and sculptor known for his unique tables and cabinets. Born on May 20, 1920 in Newtown, PA, he studied at a number of institutions including the Philadelphia Textile Institute in Philadelphia, the Rochester Institute of Technology, and Cranbrook Academy of Art in Michigan. After finishing school, Evans relocated to the town of New Hope, PA, where he shared a woodshop and showroom with his mentor Phillip Loyd Powell. In 1964, Evans became a designer for Directional Furniture, and introduced several series of furniture lines, including his popular Cityscapes series. Over the years, his techniques incorporated several influences including techniques used in the shipbuilding industry for his large-scale works. In 1981, Evans left Directional Furniture and opened his own showroom in New York. The designer died on March 7, 1987 on Nantucket Island, MA. 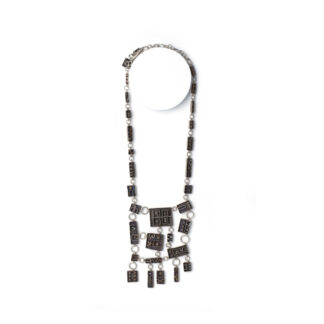