“Because pottery itself abstractly expresses—through clay, glaze and shape—nature’s landscape, it can be as spirited as a spring day or as barren as a raw and sullen winter afternoon, barely touched with color. I am aiming for distillations from nature, historically alive and poetically inspired. Clay processes are intertwined with extensive drawing, painting and collaging on paper. One recurring focus is the many forms of grasses. As depicted in my clay and paper works, images range from seasonal portraits to drawings of digested visions, quite specific yet not overly-literal.” -Catherine White

Catherine White – Warrenton, VA
Born in 1958; grew up in New York City. Received an A.A. degree in 1977 from Simon’s Rock College in Great Barrington, Massachusetts. Moved to Aix en Provence, France in 1978 to study painting at the Leo Marchutz School of Painting and Drawing. Returned to the United States in 1979 and obtained a B.A. in Fine Arts from Antioch University Maryland. Completed a M.F.A. in Ceramics at Antioch by 1982; Assistant Professor for two years teaching ceramic wheel, handbuilding and drawing to M.F.A. and undergraduate students. Established pottery studio in 1984 in Dayton, Maryland. Moved and re-established full-time studio in Warrenton, Virginia in 1989. Yearly commissions since 1983 to make pottery for OMEN, a restaurant in Soho, New York City (affiliated with OMEN, Kyoto). Adjunct Professor of Ceramics from 1993-1995 at American University, Washington, D.C. Currently Adjunct Faculty (Ceramics) at Corcoran College of Art + Design, Washington, DC. and at Hood College, Frederick, Maryland (graduate program). 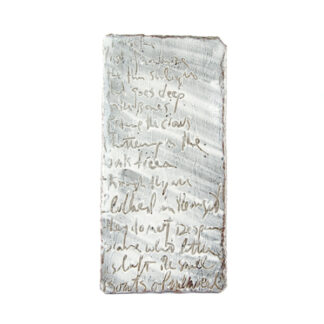