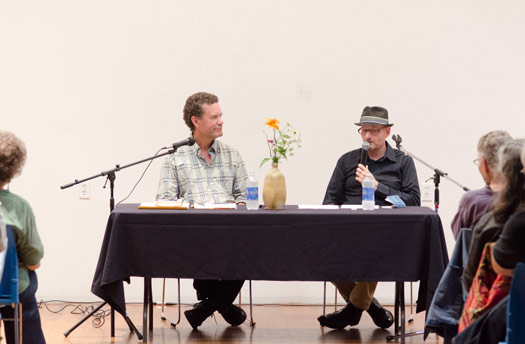 The Andrew Glasgow Writers Residency provides emerging and established writers, scholars, and curators with time to conduct research and write on topics designed to advance the field of crafts. This program is intended for writers who would benefit from focused time in a retreat environment, who have specific project goals related to craft, and who want to interact with studio artists in the Penland community.

The program is named in honor of Andrew Glasgow, who has served as the director of the American Craft Council, the director of the Furniture Society, and director of education and collections at the Southern Highland Craft Guild. Andrew is also a well-regarded curator, lecturer, and essayist, who has been a consistent intellectual force in the craft community.

Resident writers are invited to participate in Penland’s creative community, which encourages artistic diversity and exchange between media and disciplines. The program offers writers time to observe, experience, and write without interruption, using an active crafts community as a catalyst for new ideas.

The program provides one writer each year with room, board, and a private work space at Penland for up to four weeks each. The residencies generally coincide with Penland’s fall and spring sessions. Each writer will be asked to engage with Penland’s artist community, make a presentation on their writing or ideas.

Penland’s goals for this program are to support writing about craft by offering writers time, space, and resources to create new work; to engage writers with campus and local arts communities; and to bring new language into the craft culture.

Writers are nominated and invited to Penland by a committee of craft professionals, art historians, and former Andrew Glasgow resident writers.

2022 Resident Writer – Camille Johnson
Camille Johnson is an Emmy Award winning producer, multidisciplinary creative and partner at Johnson Media Consulting, a video production and consulting agency. Her penchant for visual imagery and culture preservation drives her current web based project, sevenmae.com. The project sits at the intersection of visual art, education and experiences.

2021 – Madison Manning
Madison Manning is an artist and educator currently pursuing their Ph.D. at Virginia Commonwealth University in the Media, Art & Text (MATX) program, focusing on the intersection of lesbian and femme style practices as visual language, queer theory, and craft materiality. Manning holds a BFA in Jewelry Design and Metalsmithing from Texas Tech University and an MFA in Sculpture and Performance from New Mexico State University. Their work has been shown at Trestle Gallery in Brooklyn, New York, Woman Made Gallery in Chicago, Illinois as well as throughout Texas, Georgia, Tennessee, and New Mexico. Manning’s article, “Honest Queer Art Education in the South,” was published in Visual Arts Research Journal: Queering Art Education. They have presented at the Southeastern College Art Conference (SECAC) and Foundations in Art: Theory & Education Conference (FATE). They have been Artist in Residence at DE-CONSTRUKT [projekts] in Red Hook, Brooklyn and Arts, Letters & Numbers in Averill Park, New York.

2018 – Jay Miller
Jay Miller is Chair of the Philosophy Department at Warren Wilson College, and Director of the Warren Wilson College Honors Program. He also serves as Chair of the Public Art and Cultural Commission for the City of Asheville. He holds a PhD in philosophy, with research grants that include a Fulbright Fellowship at Marburg University and a DAAD (German Academic Exchange Program) at the Goethe University in Frankfurt, Germany. Drawing largely on the tradition of German idealist philosophy, his research examines the intersection between art and politics. He has published widely on issues ranging from Hegel’s aesthetics, censorship in the arts, arts education, and art in cultural politics. During his stay at Penland, he will be working on the final chapters of a book manuscript, currently under review with Columbia University Press, that explores the relation between aesthetics and cultural identity.

2017 – Paula Owen
Paula Owen began her tenure as President of the Southwest School of Art in San Antonio, Texas in 1996. Owen has served on national and regional boards and panels, including for the Pew Artist Fellowships and the National Endowment for the Arts. She is a published writer for books and exhibition catalogs and co-authored a book, Objects and Meaning: New Perspectives on Art and Craft, published by Scarecrow Press. She has also been the curator of many exhibitions.

Owen is a practicing artist and holds an MFA in painting and printmaking from Virginia Commonwealth University. She has shown her work in numerous group and solo shows throughout the nation.

2016 – Jenni Sorkin
Jenni is Assistant Professor of Contemporary Art History at University of California, Santa Barbara. She holds a PhD in the History of Art from Yale University, an MA in Curatorial Studies from The Center for Curatorial Studies at Bard College, and a BFA from The School of the Art Institute of Chicago. She has received fellowships from the ACLS, the Luce Foundation, and the Getty Research Institute. Her writing has appeared in the Art Journal, Art Monthly, NU: The Nordic Art Review, Frieze, The Journal of Modern Craft, Modern Painters, Third Text, and Texte zur Kunst. Her book, Live Form: Women, Ceramics and Community, about gender and post-war ceramics practice, was published by The University of Chicago Press in May 2016. During her time at Penland, Jenni worked on an essay about abstraction and textiles to be published in the catalog for the exhibition Boundary Markers: Outlier Artists and the Contemporary Mainstream. The exhibition will open at the National Gallery of Art in Washington D.C. in 2018.

2015 – Stuart Kestenbaum
Suart Kestenbaum is the author of four published collections of poems. He has also written The View From Here, a book of essays on craft and community. Stuart has written and spoken widely on craft making and creativity, and his poems and writing have appeared in numerous small press publications and magazines including Tikkun, The Sun, Beloit Poetry Journal, and others and on Garrison Keillor’s Writer’s Almanac. He was the director of the Haystack Mountain School of Crafts in Deer Isle, Maine for twenty-seven years, and was elected an honorary fellow of the American Craft Council in 2006.

Stuart Kestenbaum writes about his time at Penland, plus a video-excerpt of his poetry reading.

2014 – Garth Clark
Garth Clark is an internationally known writer, historian, critic, and gallerist. Clark is co-founder of Garth Clark Gallery in New York and Los Angeles, founder and former director of the Ceramic Arts Foundation, and founder of the CFile Foundation, a global community working to bring ceramics into the mainstream of visual art. He is the author of over sixty books and several hundred reviews and essays.

2013 – Emilia Ferraro
Emilia Ferarro has been the director of the school of applied anthropology at Salesian University in Quito, Ecuador and is currently a professor of anthropology and sustainable development at the University of St. Andrews in Scotland. She has written extensively about the indigenous people of the Andes. Her current research is focused on sustainability issues including the role that making and craft may play in developing new ways of thinking and living that support a sustainable future for human society.

2012 – Christopher Benfey
Christopher Benfey is the Mellon Professor of English at Mount Holyoke College in Massachusetts. He is the author of Red Brick, Black Mountain, White Clay: Reflections on Art, Family, And Survival and four other books about American art and culture. He is a member of the American Academy of Arts and Sciences, a long-time art critic for the online magazine Slate, and a frequent contributor to The New York Review of Books, The New York Times Book Review, and the New Republic. Benfey will return to Penland in 2014 as an instructor, co-teaching a class combining word and image with photographer Neal Rantoul.

2011 – Barry Lopez
Barry Lopez is an acclaimed author of essays, journalism, and fiction. His books include Arctic Dreams (which won a National Book Award), Winter Count, About this Life, and Resistance. He has written about the work of various visual and craft artists and has worked collaboratively with a composer, a playwright, several illustrators, and a book artist. He was in residence in October, 2011. As part of his residency, Barry Lopez read several short pieces and then led a discussion on the topic of “the artist and social responsibility.”
Barry Lopez at Penland.

2010 – Ingrid Shaffner
Ingrid Schaffner is a senior curator at the Institute of Contemporary Art in Philadelphia. In addition to curating numerous exhibitions, she has written extensively on modern and contemporary art. Her publications include Salvador Dali’s Dream of Venus: The Surrealist Funhouse at the 1939 World’s Fair (Princeton Architectural Press) and an essay on wall text in Questions of Practice: What Makes a Great Exhibition? (Philadelphia Exhibitions Initiative).

Support for the Writers Residency

If you use the online form please write “Andrew Glasgow Writers Residency” in the Additional Gift Information box.

If you would like to talk to the development office about supporting this program, contact Joan Glynn:
developmentdir@penland.org