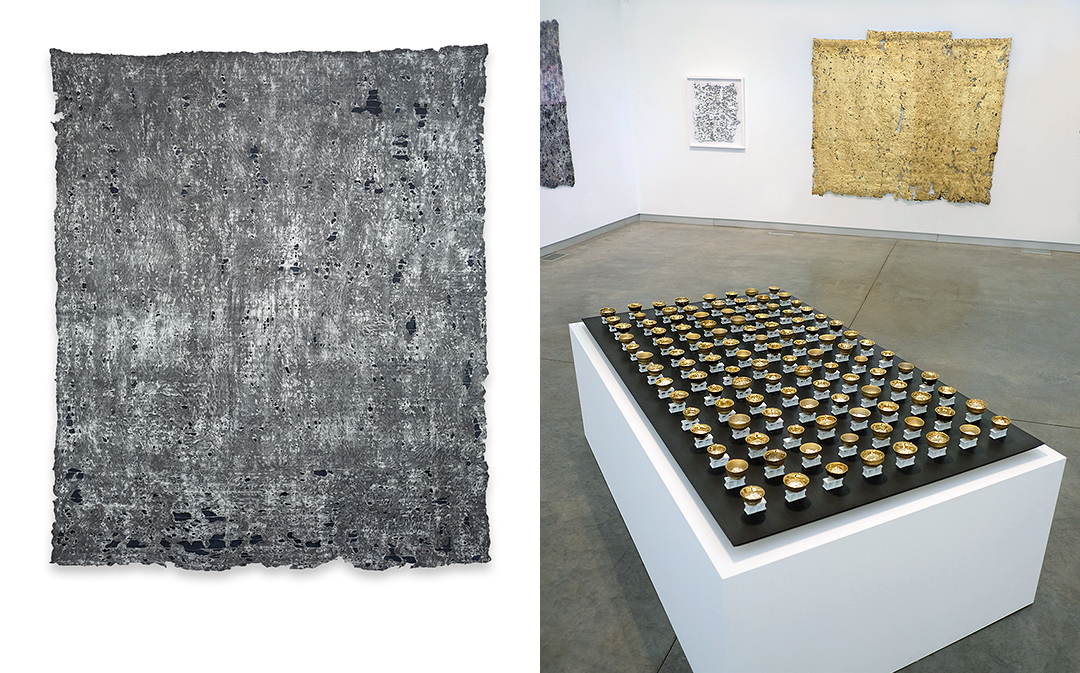 WHAT REMAINS speaks to both visual and conceptual depth – of the inherent memory embedded in the works of both Rachel Meginnes and Kelly O’Briant. Actual material, in the form of reclaimed textiles forms the foundation of Meginnes’s process, a physical and metaphorical layering of wear and re-adapting, moving forward and revealing the past. For 0’Briant, the remainders are often phantom forms – a chimera or abstraction of scientific theory. Her work in ceramics has explored the notions of dark matter, light and shadow, the passage of time. For this exhibition O’Briant mines the emotional effect of unsettlement and reconstruction – the physical act of carrying the past forward. Paired in this “conversation” exhibition, their work has the potential to create a powerful resonance with the viewer.

Loss is one of the most profound and universal experiences we share. It can be devastating in its definitive nature. And yet, stripped bare by grief, we often find an unexpected beauty in sorrow. It can allow us to confront truths about others and ourselves that weren’t previously possible to understand. Rachel Meginnes’s new series is a meditation on the sweet and terrible beauty of loss.

Meginnes begins each work by meticulously deconstructing a “cutter quilt,” or a quilt so ragged and worn that its only function is to be cut up and turned into something else. The batting provides a rich and authentic texture upon which the artist applies stains and pigments to create rhythmic fields of color, depth, and pattern. Her interest in preserving the history of the object, its rips, tears, holes, and tatters speaks to the importance of the quilt as an artifact—a relic that reflects the marks of a previous maker and the passage of time.

The process of deconstructing and reconstructing each quilt becomes a metaphor for dealing with loss. With each work the artist is forced to confront a ubiquitous set of questions: What do I hold onto? What do I cover up? And, do I trust myself not to mess it up? Grief, figuring out how to move on, navigating the weight of history without becoming frozen by fear—these are just some of the questions bound up in the structure of Meginnes’s new series.

The final wall hanging is no longer a quilt, an object with distinct layers. Instead the color, surface, and pattern of the cover merge with the batting into a new object, one that is surface and structure, image and form at the same time. Through this transformational artistic process, Meginnes confronts the feelings of loss, grief, and fear, turning old and worn out quilts into artworks of great contemplation, beauty, and grandeur.

With contemporary society awash in current unease and migration, artists are becoming increasingly reflective of displacement on individual and collective psychologies. Particularly urgent and timely has been the examination of a “sense of place,” exploring an aggregate of geographical, cultural, and familial histories past and present, rooted and uprooted in our current times.

Kelly O’Briant has ranged far from her North Carolinian roots, exploring and expanding her craft, while meditating on issues of universal concern. Recently she has been in residence in Jingdezhen, China, the porcelain capital of the world, known for its centuries-old ceramic production and skilled craftsmen who facilitate working processes for international artists.

Migration, rootlessness, and the quest for home has become a compelling theme in contemporary art. The Museum of Modern Art exhibited Jacob Lawrence’s Migration Series in 2015, followed a year later by Insecurities: Tracing Displacement and Shelter. In the summer of 2017, the Los Angeles County Museum of Art mounted the work of forty-two Latino and Latin-American artists in the exhibition Home-So Different, So Appealing of which Peter Schjeldahl wrote in The New Yorker (June 26, 2017), “…a primordial idea: home, where you hang your hat, if you have one, and where the heart is or, for some grim reason, fails to be.”

During her residency at Jingdezhen, O’Briant completed the work All the Good Things, consisting of a meditative assemblage of 150 gold-lustered bowls containing porcelain seeds.  Not unlike Ai Wei Wei’s Sunflower Seeds project, which argued for human compassion during a period of uncertainty, All the Good Things embraces optimism in the face of impermanence. While the significance of gold is an important part of the Chinese culture, associated with abundance and high status, O’Briant explains that the seeds represent her migratory travel and work experiences marked by the generosity and gestures of gratitude of those encountered along the way.

The Things We Carry, also completed in China, is composed of twelve porcelain rooftop homes, embedded with household objects impressed on the exterior surface. O’Briant has remarked that, “reminiscent of the traditional still life, these installations capture a moment of intimacy between everyday objects and their users; illustrating patterns of communication habits, story-telling, and community.” Such rumination was accelerated by her observations of China’s historic neighborhoods undergoing demolition and rebuilding, resulting, sometimes in the blink of the eye, in individual displacement resulting in a society unhinged from its history.

Impenetrable without entrance, they act as a collective memory bank, traces of utensils and textile designs formed in the walls of an illusionary dwelling are a distillation of the artist’s untethered nomadic journeys and her desire for secure anchorage. The use of repetitive forms, monochromatic glazing, and familiar objects place O’Briant’s installations in both the concrete and metaphorical realms.

Balancing the qualms of recent moves, the artist finds reaffirmation of belonging with her passion for her chosen material and the closely-knit community of clay workers worldwide. Like all good art, deeply felt conviction is buoyed by well-honed craftsmanship, resulting in shared experience for fellow travelers.

Rachel Meginnes | Trained as a weaver, Rachel Meginnes’s fascination with textiles began in high school.  After receiving her Bachelor of Arts degree from Earlham College in 1999, Rachel followed her interest in textiles by travelling to Northern Japan to study the traditional crafts of saki-ori, ikat, and indigo dyeing. Upon returning to the States, she apprenticed as a rug weaver and continued her study of art and textiles by moving to Seattle to earn her Master of Fine Arts degree in Fibers at the University of Washington in 2005. From 2005-2011, Rachel co-owned and operated Dorjé Contemporary, LLC a custom rug design company producing hand-knotted, Tibetan carpets for the interiors trade. 2012 marked a significant shift in Rachel’s career when she dedicated herself to being a studio artist full time. This past August, she completed a three-year residency at Penland School of Crafts in North Carolina.

Although no longer working directly at the loom, Rachel has kept many of her weaving processes alive in her current studio practice. Integrating textiles with painting, Rachel accepts and encourages her need to work hands-on with her materials and enjoys the solitude that comes along with producing such methodical work. Her original love for the plain weave structure has never ceased and she continues to believe that there is infinite possibility in the most basic of methods.

Kelly O’Briant | was a full time potter in North Carolina for almost a decade before earning an MFA (2014) from Arizona State University. She has been a resident artist at the Archie Bray Foundation, Helena, MT, the International Ceramics Studio, Kecskemet, Hungary and the Pottery Workshop, Jingdezhen, China. The National Council for Education on the Ceramic Arts (NCECA) named her an Emerging Artist in 2015. O’Briant’s work has been included in exhibitions internationally, including solo exhibitions at the Houston Center for Contemporary Craft, Houston, TX, the Myers Gallery, Grand Forks, ND, the Mesaros Gallery, Morgantown, WV, the Windows Gallery, Jingdezhen, China and Penland School of Crafts. O’Briant recently completed a post-doctoral research fellowship at West Virginia University (Morgantown, WV) in ceramic production methods and ceramic digital technology. O’Briant joined the faculty as an Assistant Professor of Art in Ceramics at the University of Dallas in the fall of 2017.

For a complete list of works in the exhibition and purchase information please contact Kathryn Gremley at gallery@penland.org

Packing my things into boxes, displaced and out of order, I think I will remember when I get there.
Uprooted and in motion, I carry things with me.
Unpacking some, forgetting others, I remake my home with objects collected along the way. Boxes of graters and mixers,
And kettles,
And whisks,
And pots,
And bottles,
And cups,
And spoons
give me a familiar context to which I return each day.

When the duration of the unsettlement begins to weigh heavy, so do the objects. I find, discard and collect as I look for order while reconstructing the home.
I rely on new relationships for a new foundation. With generosity and gratitude, I am rooted.

The Penland Gallery extends our thanks to the artists – Rachel and Kelly – for their dedication, hard work, and the vision required to create this exhibition. Photography by the artists and Dana Moore. Special thanks to Marilyn Zapf and Peter Held for their insightful essays.