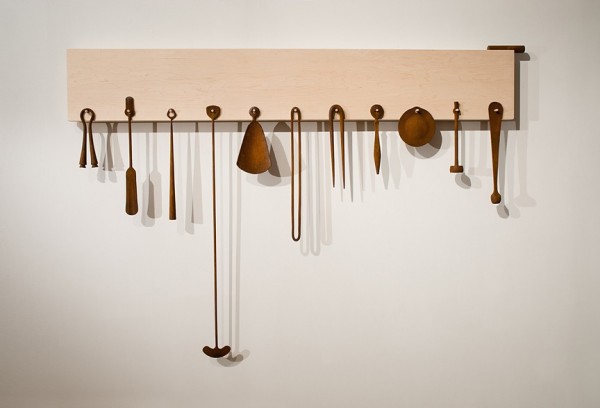 I’m standing in the Penland Gallery, looking at the forged steel objects in Mike Rossi’s Mass Effect,—eleven of them—hanging. They look like tools. They’re tools? They’re rusted and somehow shifting in their surfaces—evoking human use in their gallery-ready context. Names for each object form in my mind: Key to the Secret Wall. Golden Hornshoe. Deep Pincer. Reading left to right, I flunk each thing with my imagined names, and wonder, if I could steal just one, which one would I slip into my bag?

[Ed. note: Penland School of Crafts does not condone stealing art or sentences about stealing art.]

“I wanted it to look like the nicest tool rack ever made,” says Rossi half-jokingly as we talk about Mass Effect. Each piece was forged out of his desire to push the boundaries of forging: the objects were made without grinding, filing or welding. Rossi used only a power hammer, the anvil, and a rod the size of the one resting on top of the upper right corner of the work—1 x 5 inches. (“Mass effect,” then, refers to each object being forged without a loss of material–each has the same mass and volume.) Within this premise, Rossi proceeded in an effort to work without certainty—to play call and response with steel.

This call and response, for Rossi, produces objects “half-remembered, half-forgotten, mash-ups of other objects I’ve seen.” There are references to forms he encountered in childhood—from books or from his youth in Michigan—“plumb bobs, garden tools, marine hardware.” It’s a bit like Proust’s adult narrator in Remembrance of Things Past, slipping into reverie when the form of the shell-shaped cookie from his childhood dissolves in his tea. Except, in this case, we have a blacksmith, working toward an endlessly dissolving form.

And standing in front of each object in Mass Effect, the viewer is invited into the forged space where things have been drawn from the unconscious. Remember being a child, thunderstruck by the appearance of some beautiful and mundane thing? Like the shapes, the rusted surfaces of the objects in Mass Effect (“planished,” Mike emails me later, “struck lightly to achieve a more uniform surface”) gesture toward the recurring astonishment of first perceptions—those moments when the child sees oneself suddenly apart from things in the world, and wants, more than anything, to catch the foreign object. Having time to dive into this way of making has helped Rossi sharpen his way of seeing for client-driven, architectural commissions. “I pay attention differently,” he says, “[making sculpture] increases my ability to observe the world.” 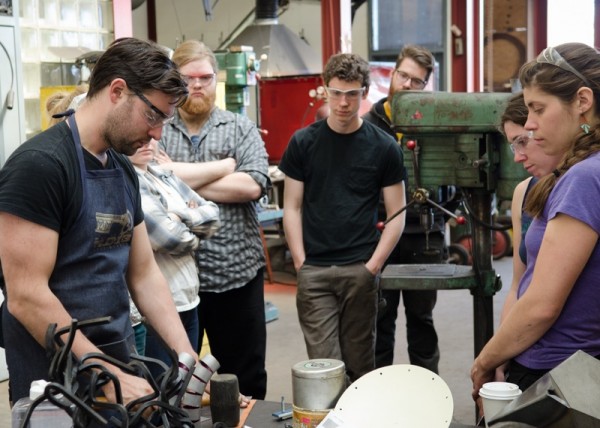 Mike Rossi and students in his spring 2014 Concentration at Penland. Photo by Robin Dreyer.

The ways Rossi involves intuition, memory, and play into object making resonates with his teaching style, too, as the students in his Penland iron concentration this spring experienced firsthand. One of his workshop assignments involved forge objects for an EDC—an everyday carry—based on what each student would take in a small pack on her or his person in order to live. A survivalist’s game, but Rossi opened up the assignment, inviting his students to create an EDC for a fictional dream character if they chose, and several of them did.

“There are so many places to learn cutting, welding—but by learning forging, you get a versatility with the material,” Rossi says. “You engage with the material in a different way. I want my students to have this versatility and the knowledge that blacksmithing has a place in the world today.” ”We’re still in an iron age,” he adds. “It’s the silent foundation that underlies everything.”

We’re wrapping up our conversation. It’s morning in the Penland Coffee House, the place is filling up, Crystal’s throwing a booming hello out to someone she loves, and Rossi’s headed back up to the iron studio. I ask a throw-away question, “Anything else you’d like to add?” He looks at me evenly, earnestly. “I want to make thoughtful objects,” he says.–Elaine Bleakney