At the end of March, we posted a video of the ceremony to name the Penland clay studio in honor of Bobby Kadis. On April 6, we were notified that Bobby had died from the cancer he had been wrestling with for seven years. He was 83. Back in 2015 Penland archivist Carey Hedlund and Jasmin McFayden, the director’s assistant, spent an afternoon talking to Bobby and prepared a tribute for that year’s auction catalog. We have adapted that tribute here to honor Bobby.

“I was sort of all business and this Penland experience shook me up.”
Bobby discovered clay more than forty years ago at a Sunday in the Park festival in Goldsboro, North Carolina. “There was a guy out there on a kick wheel, throwing pots,” he remembered. “I stood there and watched for a long time and within a week my wife Claudia had signed me up for his class at the arts center.” In 1978 Bobby came to Penland as a beginner—he’d just graduated from pinch pots to the kick wheel. His first workshop here was taught by the great ceramist Robert Turner, and Bobby found himself in a position he recognized as “far away from anything that I had ever experienced.”

“Bob Turner was a philosopher. All he wanted to do was get into your head, to make sure you understood what you were making and what you should be thinking about when you do it.”
Bobby was baffled by this new experience and Turner’s teaching style, but he came to recognize and value what Turner was doing: challenging his students to see, perceive, and to care in new ways. The two men forged a friendship and shared an ongoing conversation about life and clay. Bobby said that this first Penland workshop changed his life. Over the years he studied with many of the important artists of late 20th century ceramics. He reached beyond the boundaries of his career as a commercial real estate developer and became a maker in his own right.

“Why in the world would I want to be on this board? I go up to Penland and it’s Magic Mountain and everything runs gorgeously and I have a fabulous time.”
In addition to being a student, Bobby served for sixteen years on Penland’s board of trustees, including two years as chair. He was a voice for the student experience, a friend to the staff, and deeply involved as an advisor for the school’s operations. He also co-chaired, with Cynthia Bringle, the 2001-2004 Preserve Penland Campaign, which raised $11.5 million for the school’s infrastructure, endowment, and operations.

“I’ve been a part of a lot of history with this school. I feel like I’m—amazingly—always around when something interesting happens.”
Bobby forged an extraordinary relationship with Penland and maintained a unique vantage point. He knew every director except founder Lucy Morgan, and was a friend and advisor to most of them. He was a voice of reason in difficult times. And he had fun: attending dance parties in Bill Brown’s living room, Poly Proms at Northlight, and an impromptu modern dance performance on the porch of Dora’s Place. He experienced the many charms of Penland’s housing–over the years, he slept in almost every building–and, before the whole clay studio was named for him, he was honored with the Bobby Kadis Slop Bucket.

Bobby Kadis had a generosity of spirit accompanied by enthusiasm, clarity, modesty, and ambitious determination. His generosity, expertise, and advocacy touched scores of people–locally, regionally, and nationally. He made countless friends and colleagues while championing the arts with an energy and passion few individuals could muster. 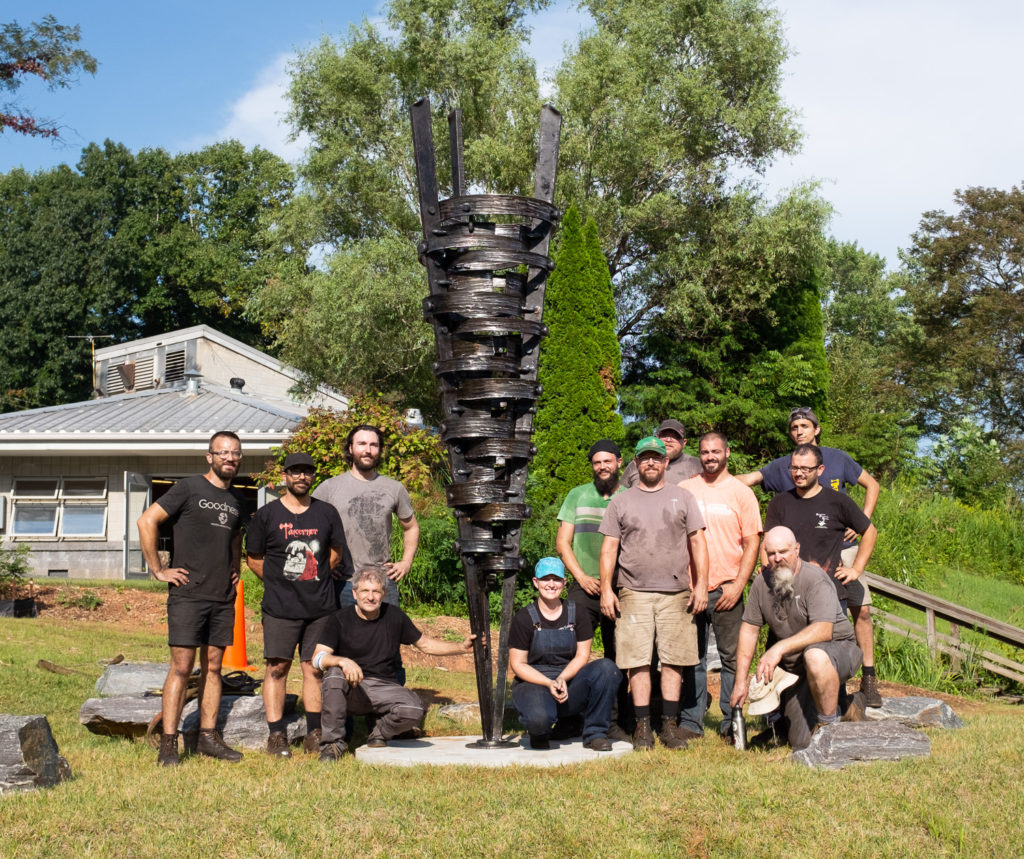 These are the participants in our Sixth Session iron workshop. Led by instructors Claudio Bottero and Massimiliano Bottero, they spent two weeks working together to create this sculpture, which was designed by Claudio. This picture was taken just after they installed it in between the glass studio and the Northlight building. 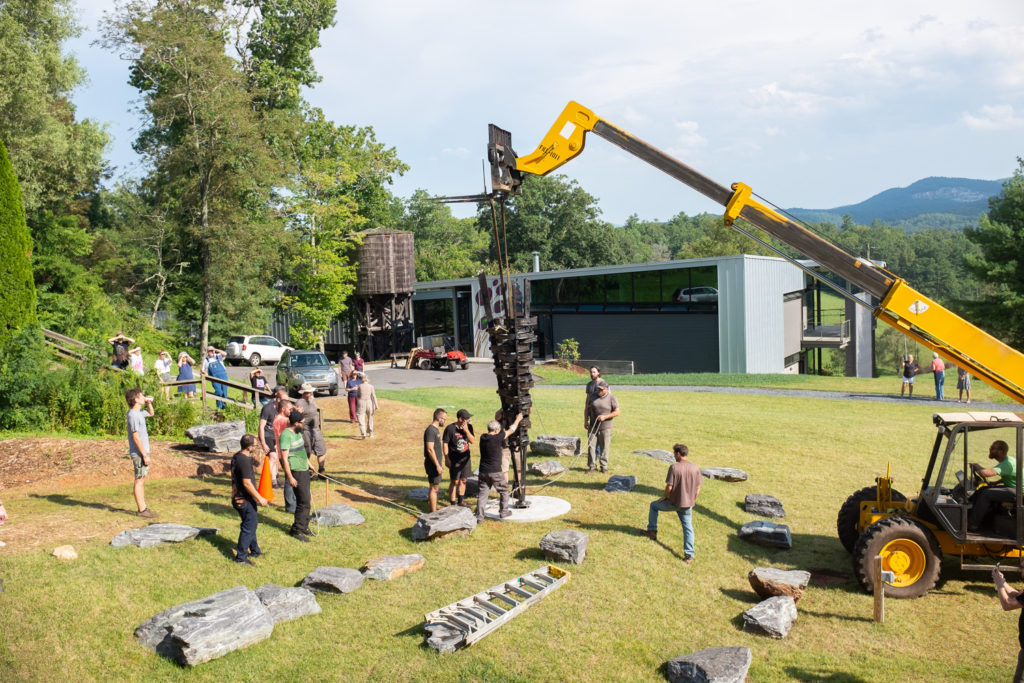 Here’s a view of the installation. 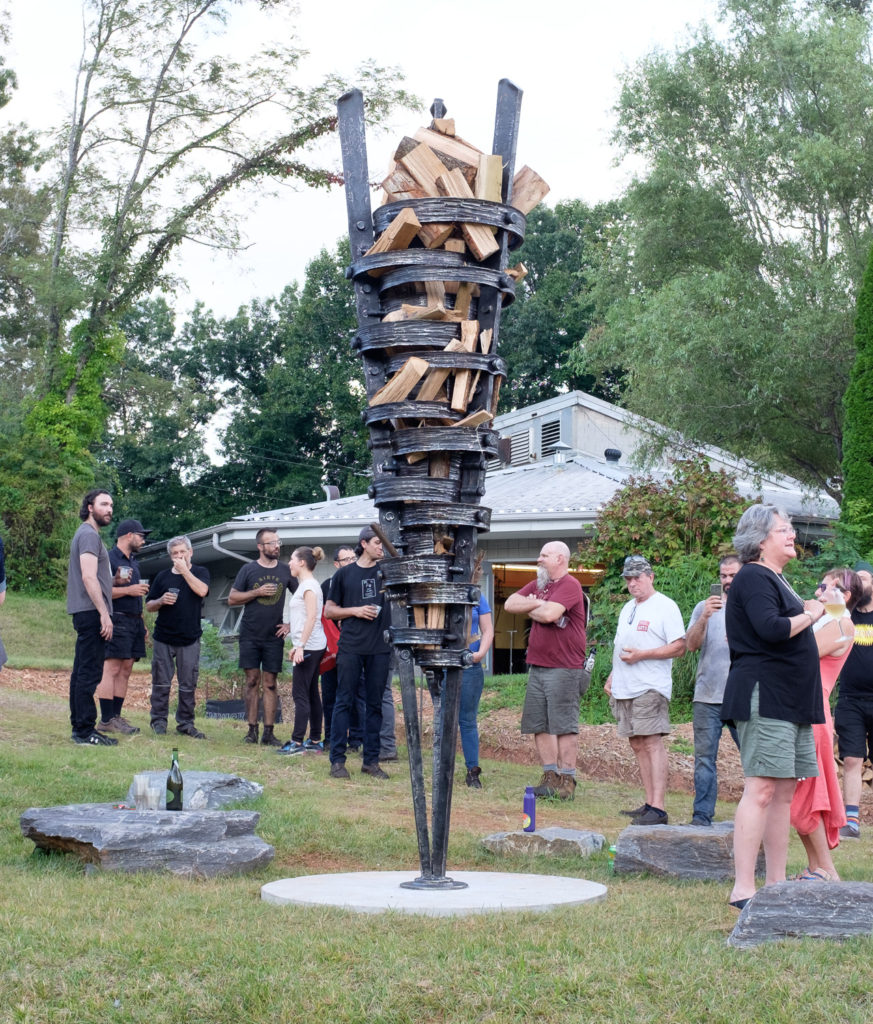 Claudio’s concept was that the piece could be filled with wood, lit on fire, and become a torch — functional sculpture! 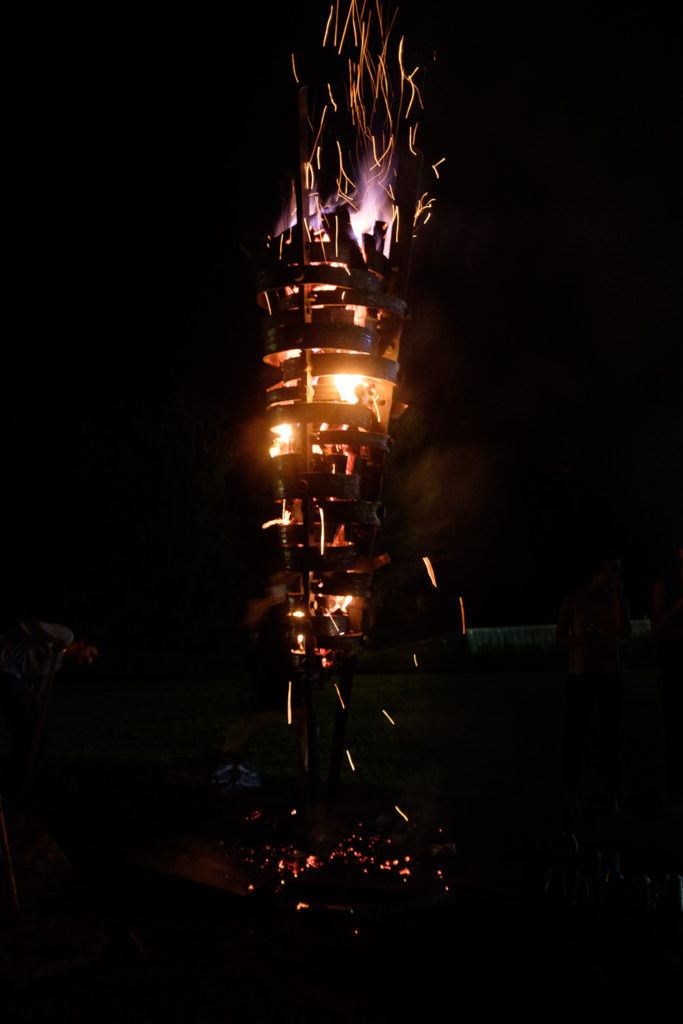 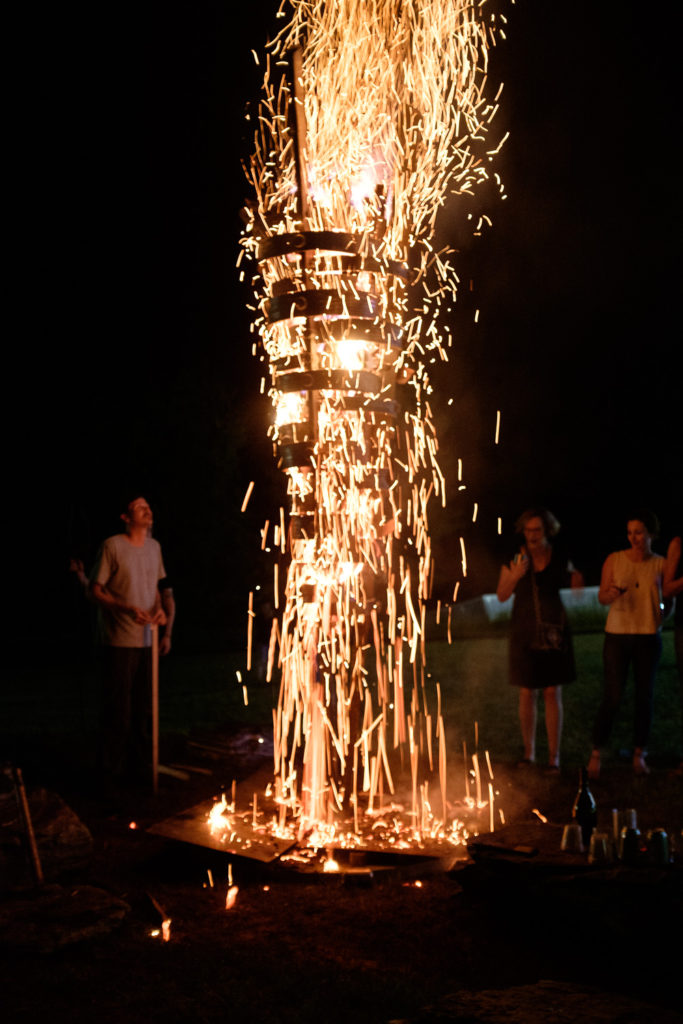 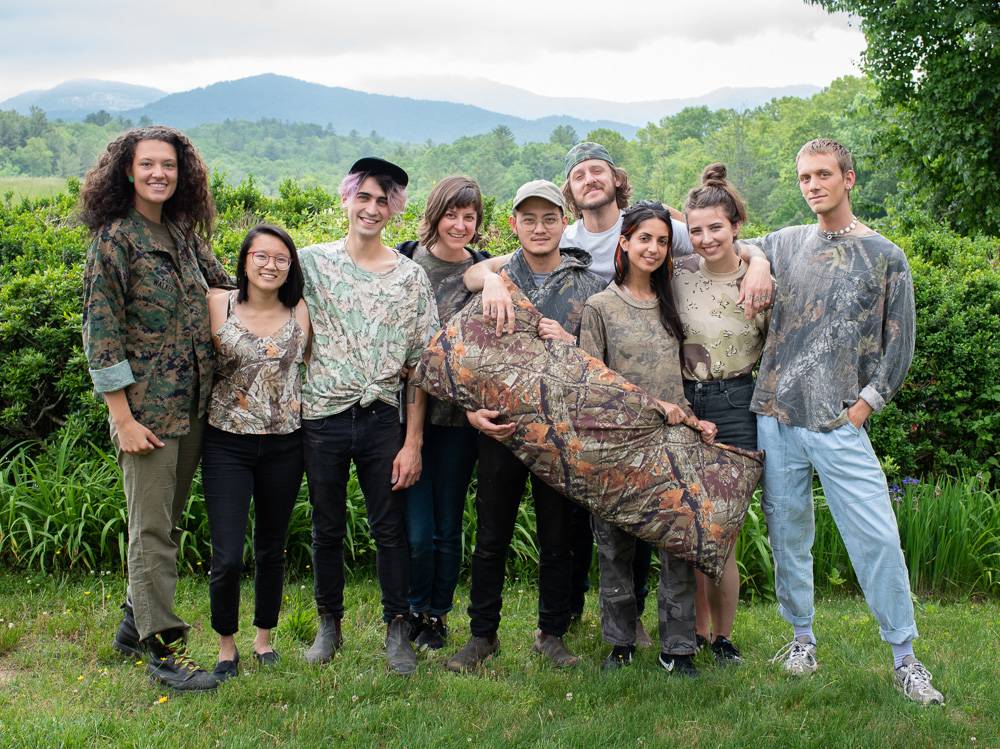 This crew is working hard all week to get so many things ready for the beginning of summer workshops on May 26. They are, of course, the Penland Core Fellows: a remarkable group of artists who live together in a big house on Penland campus, take workshops throughout the year, push their work in new directions, and do all sorts of important jobs for the school. They are dressed in camouflage because they are busy and don’t want to be interrupted so they figured they’d be harder to find this way.

Nah, they just decided it was just camo day. 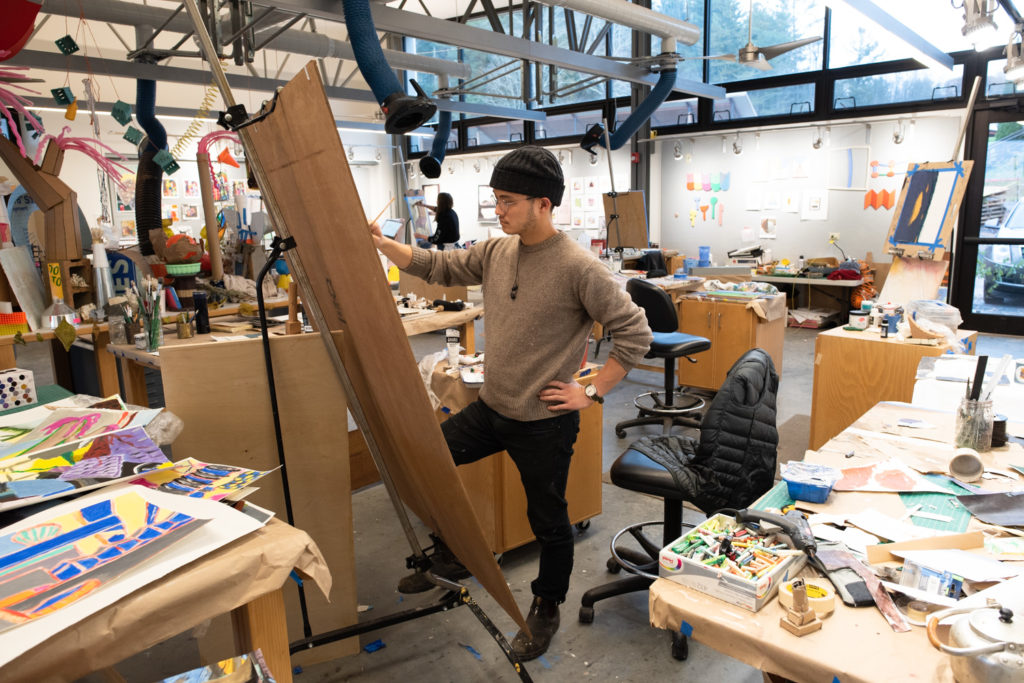 Core fellows Kento Saisho and Katherine Toler working in the drawing and painting studio during week seven of the fall Concentration led by Tonya D. Lee. 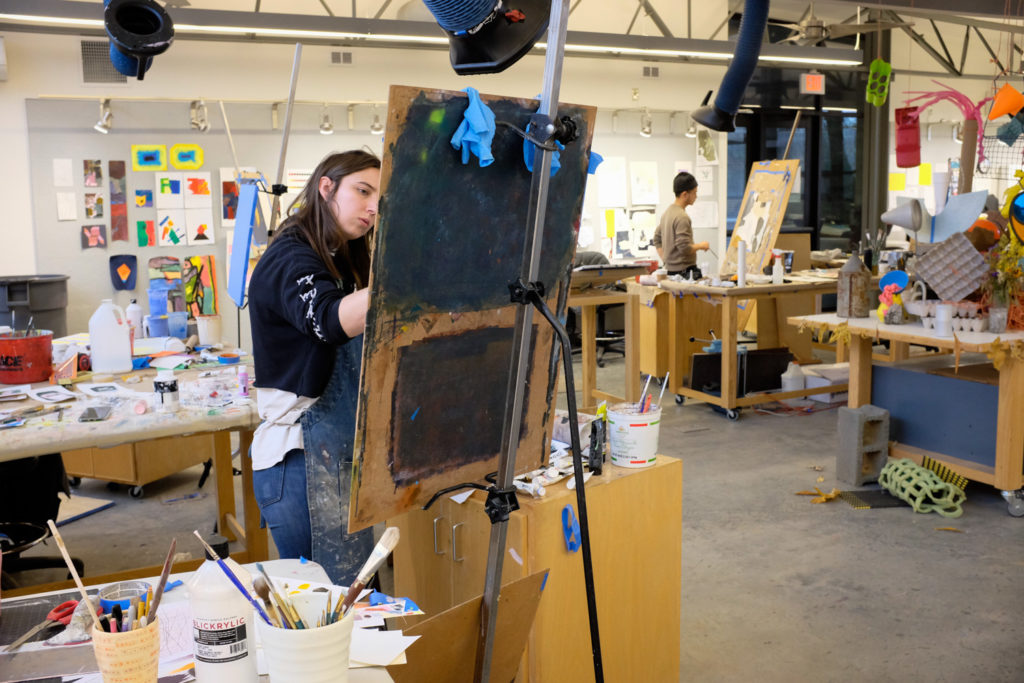 Here’s the room from Kat’s side. 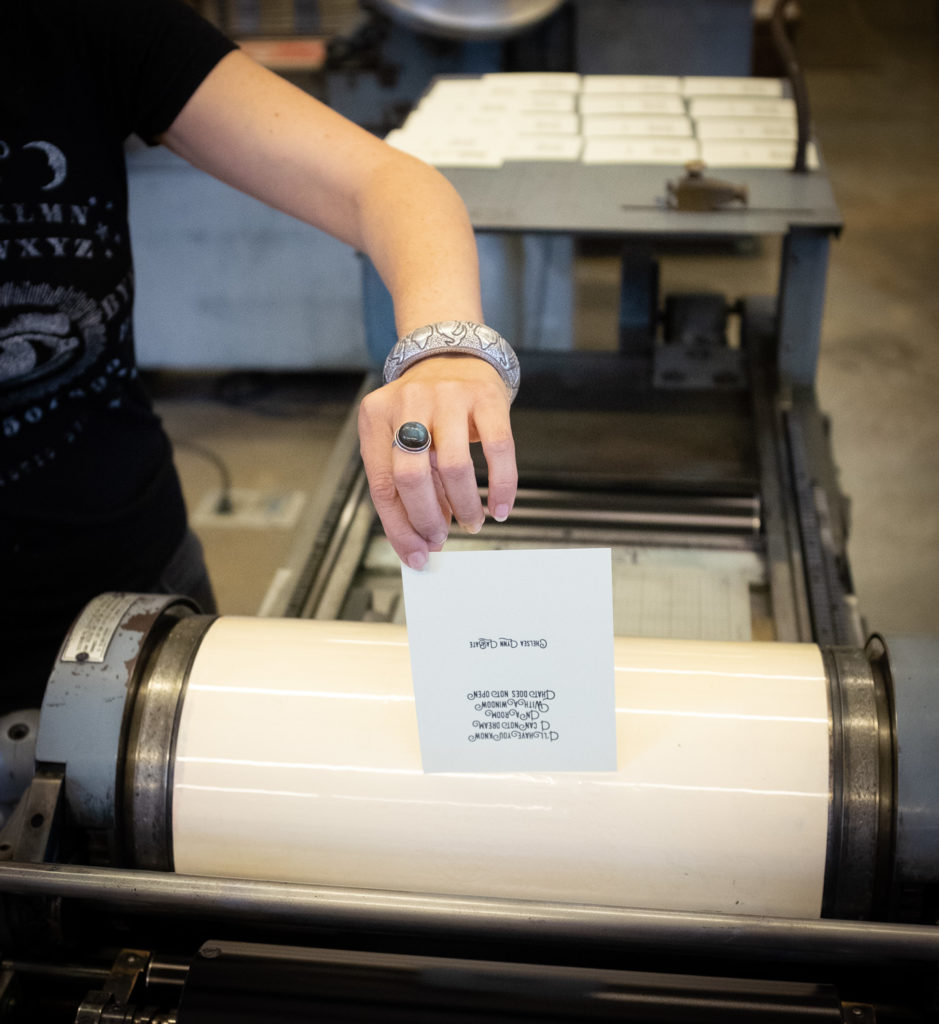 This is Chelsea LaBate (a.k.a. Ten Cent Poetry) printing a series of short poems on a Vandercook printing press in the Fall Concentration taught by Beth Schaible (a.k.a. Quill and Arrow). Chelsea is a singer, songwriter, poet, and traveler, but she says, “letterpress is my new love.” 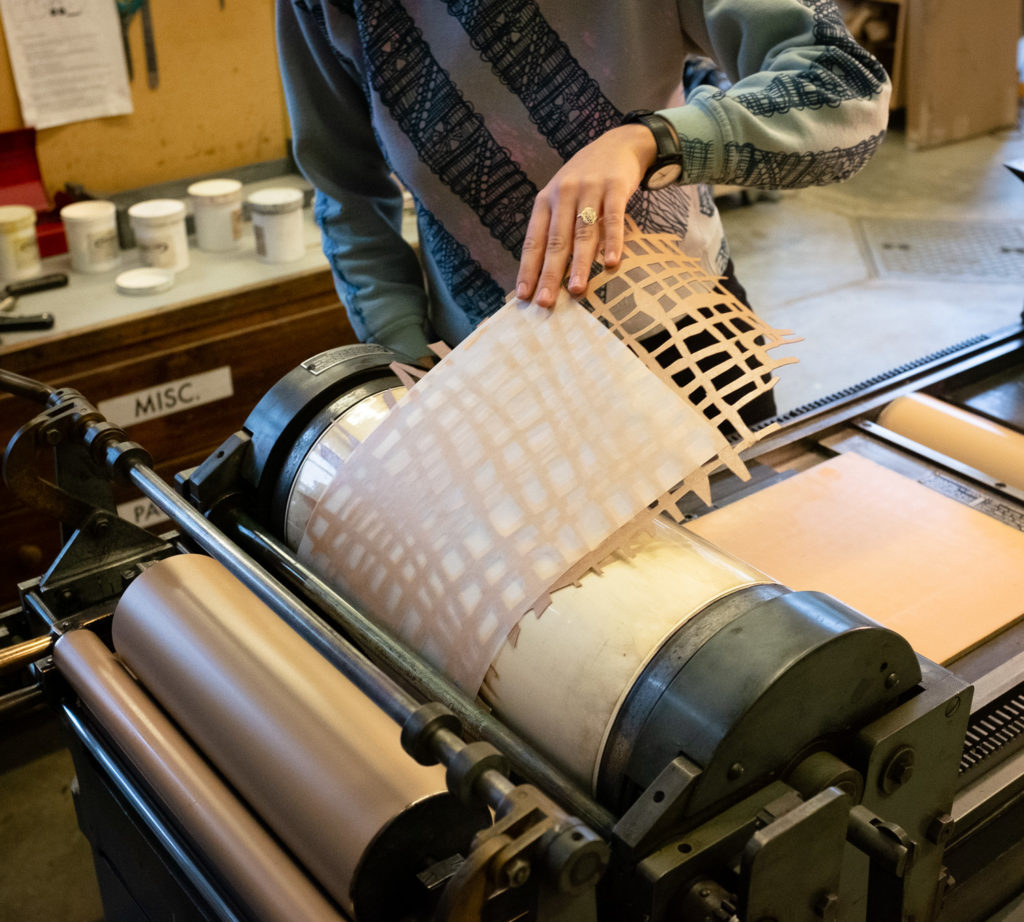 This is is the workshop’s studio assistant Celia Jailer (a.k.a. Afterschool Detective) making a pressure print onto a vellum press sheet. Pressure printing is an image-making technique in which a textured, flexible sheet is placed between the press sheet and the drum and then passed over a smooth, inked surface in the bed of the press. The image is transferred to the press sheet because it gets inked more heavily where there is pressure created by the textured sheet. It’s one of the many ways to work with these presses that Beth is covering in the workshop. 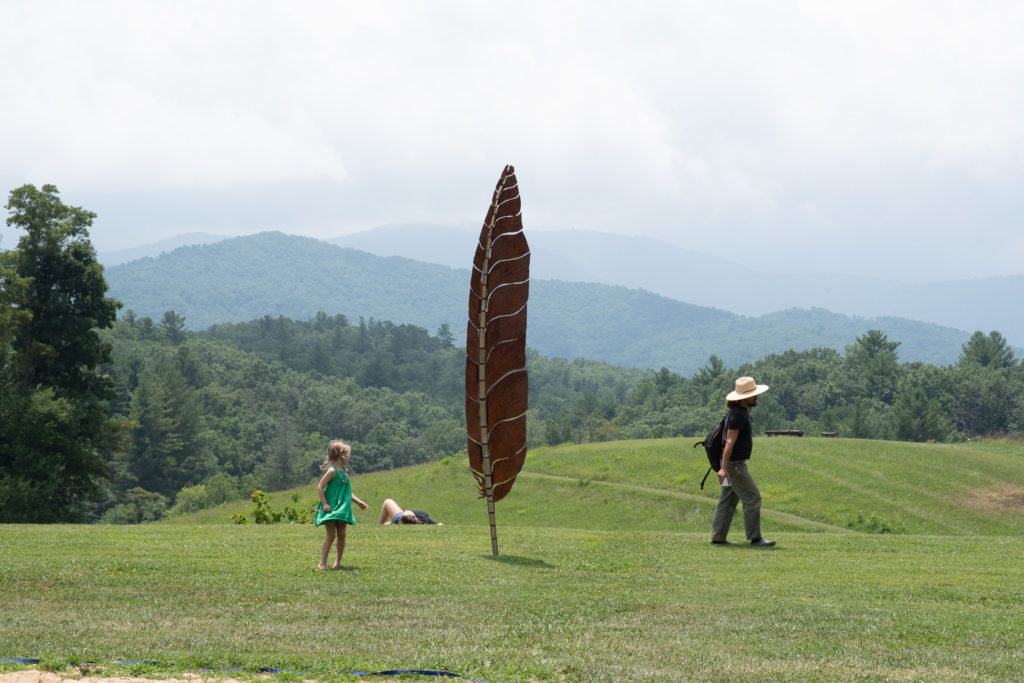 This steel feather was designed by sculptor Roberto Giordano and created by Roberto and the members of his fourth session workshop in the iron studio. It’s currently sitting on the lawn near The Pines. In a few weeks it will be installed behind the new Northlight building. It will live there until the 2019 auction when some lucky buyer will take it home.

Here’s one of the students working on it during the workshop. 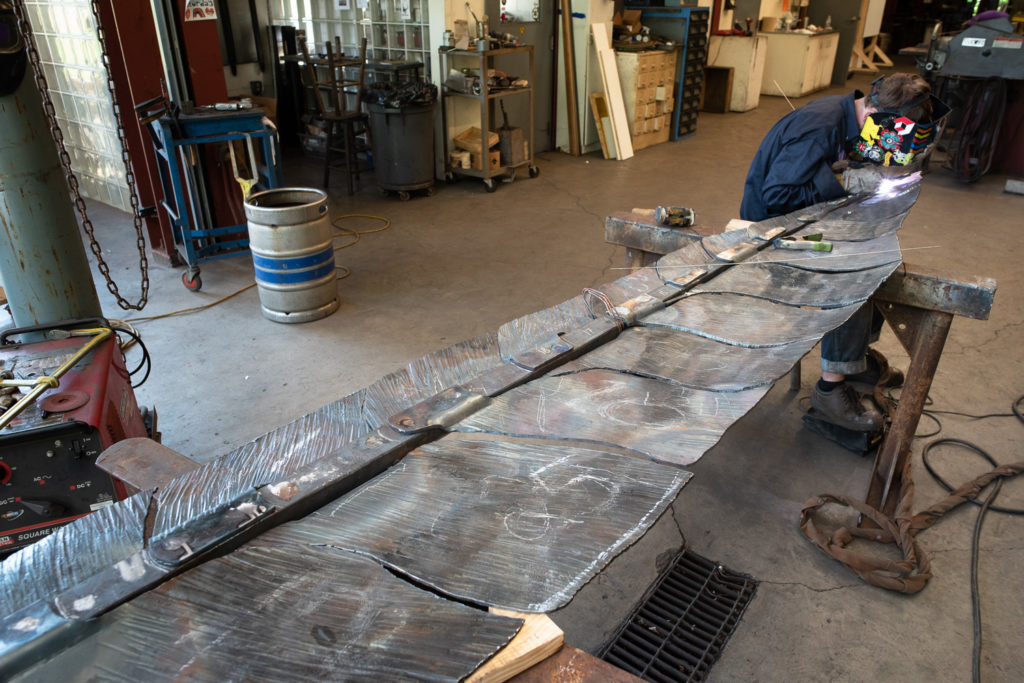 Here’s Roberto working on something else. 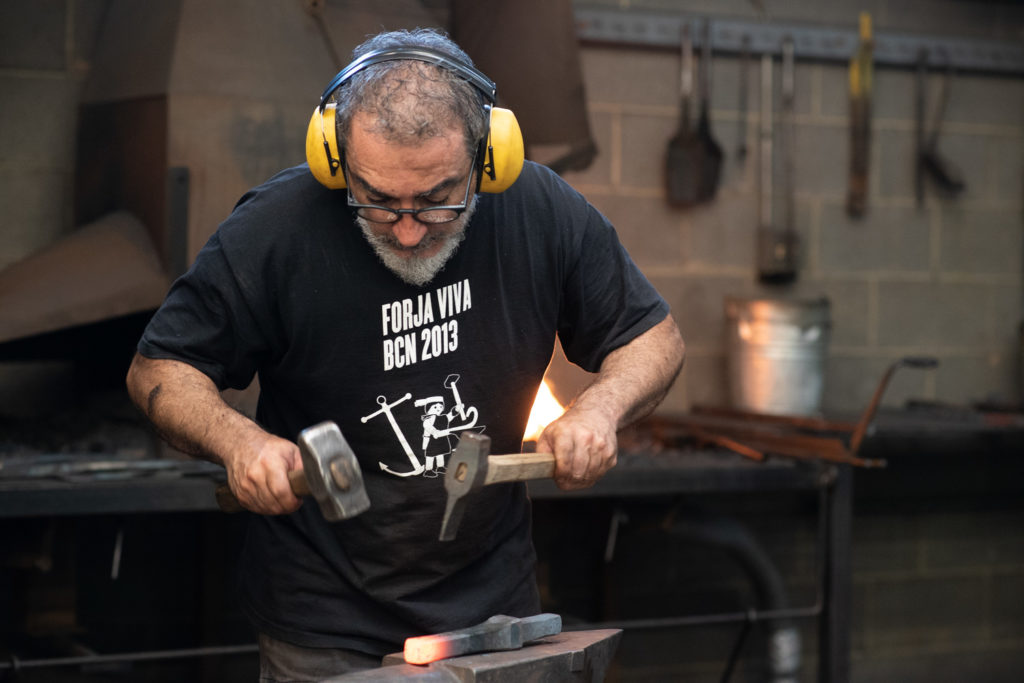 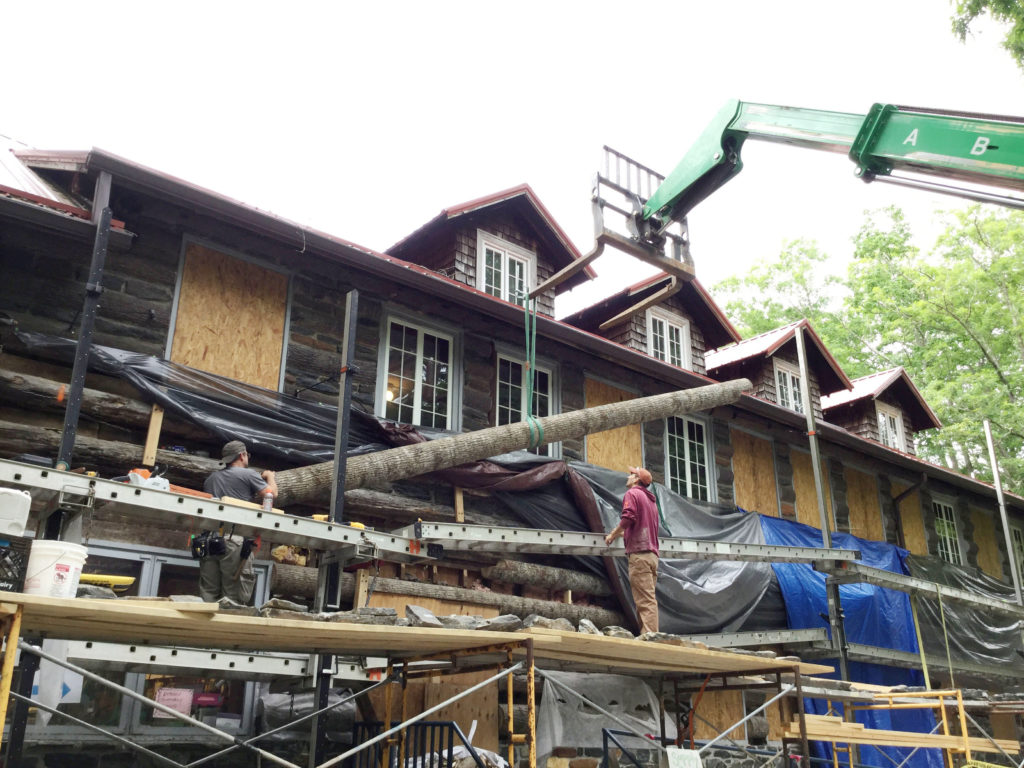 For years, we’ve been talking about the renovation of The Craft House, Penland’s iconic log structure. (About 20 percent of the logs needed replacement.) For just as long we’ve all been wondering how it would be done. Now that contractor Richard Huss and crew are deep into the job, we are starting to get the answer.

And the answer is: log by log. They take out a log or two, put in some props, cut a new log to length, lay it in the space, mark it, cut notches, put it in place, refine the cuts, put it back in place, and then do it again.

It helps that the building has a quite a bit of structure inside of the logs and it’s nailed together every which way. But the secret seems to be patience and methodical application of craft—things we respect.