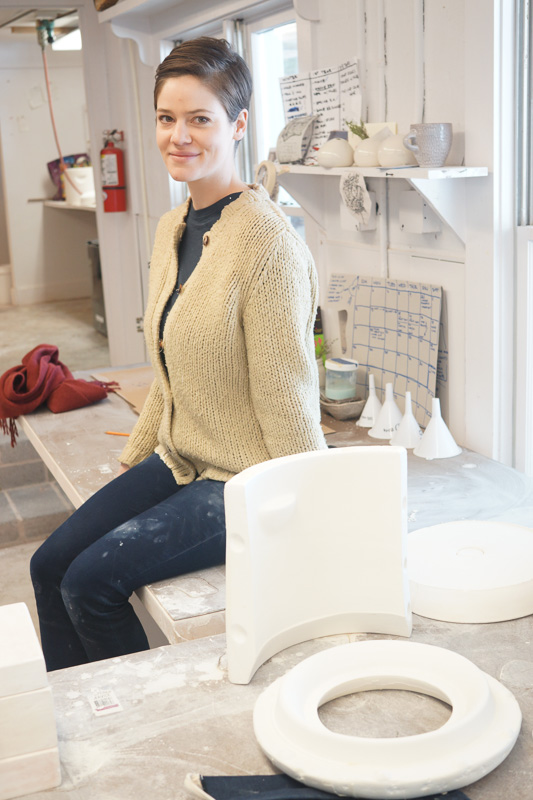 Core fellow Molly Kite Spadone was in Penland’s cool lower clay studio this winter, making, among many other things, large porcelain fermentation crocks. (Part of the crock’s mold is pictured with Molly at right.) The crocks have a long, tissue-thin wall that feels impossibly solid.

Molly pulls out a bucket of slip to show us how she starts–and what her winter process has been.

We stick our fingers in the tense and smooth liquid. The chatter in my mind immediately dims. Molly explains “deflocculating” from the slip caster’s lexicon: breaking down and dispersing clumping particles. 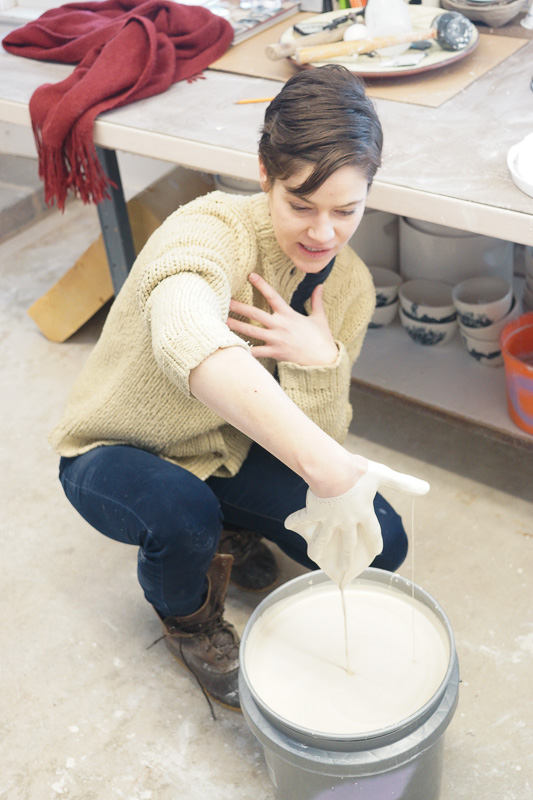 “Deflocculating” is the most beautiful word in the English language when you have your hand in a bucket of slip. Slip is the color of milky tea, air, maybe a gray rain cloud mixed in. I rinse my fingers off in the sink.

“You are making a membrane,” says Molly, explaining how she fills the mold with slip, hoping for a set form with no cracks.

All winter, Molly dealt with the rigors of membrane-making and the effects that duration can have in the process of slip casting. Under a light, she has spread the shards of broken membrane that she’ll reuse.

“I’ve been looking at the failures,” she says with a strange mix of affection and frustration as we tour the slip cemetery. 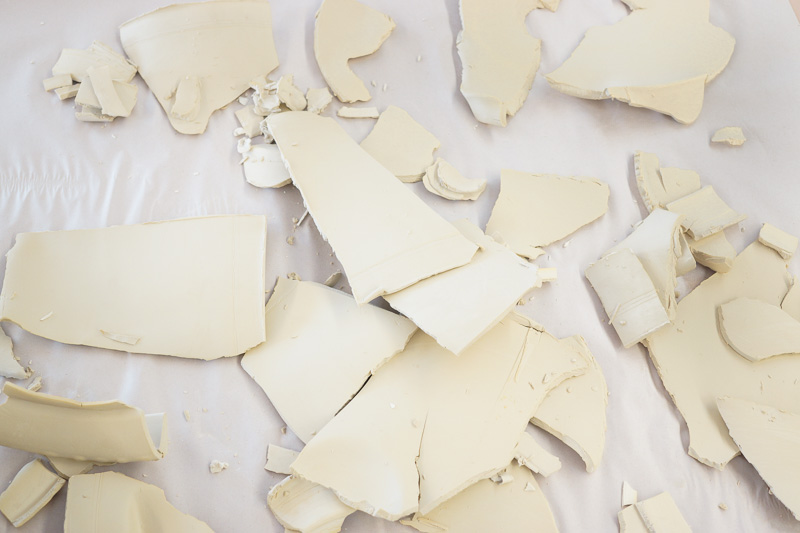 How does the hairline fracture start? Molly’s at home with this question–winter has given her time for it. It’s her last winter as a core fellow at Penland, and she’s getting ready to move back to her native Maine with just enough time to unpack before she makes her way back to Penland to assist in David Eichelberger’s spring clay workshop. [Ed. note: she’s back now, and David’s spring workshop has begun.]

“I have such a sweet taste in my mouth for this place,” she says, looking around her as we take a last look at one of the finished crocks. No cracks.
View more of Molly’s work in clay this winter–including the crocks, featuring newsprint transfers of drawings by Molly’s friend and collaborator, Kay Kelley–on Molly’s blog. 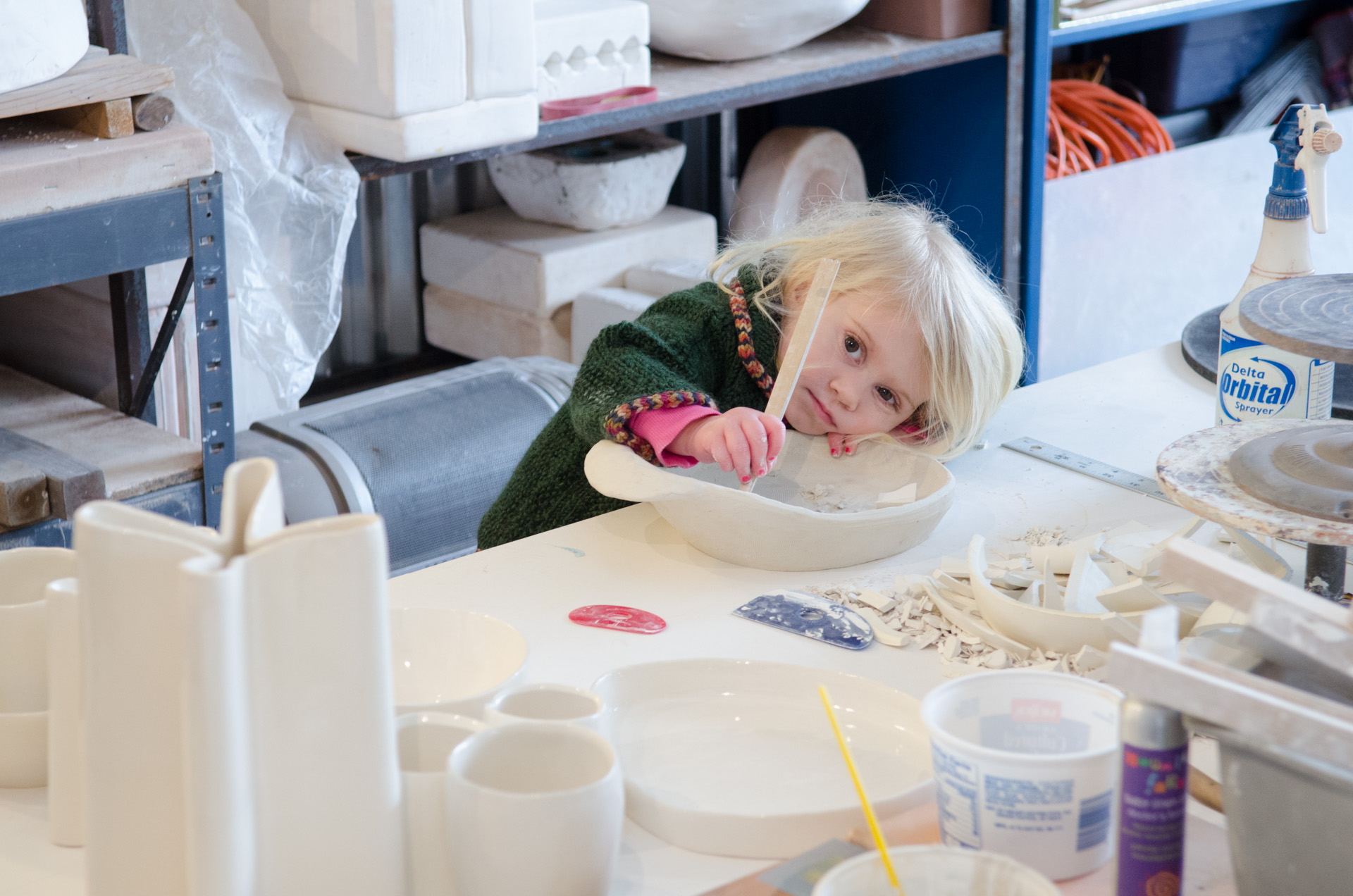 Okay, we couldn’t resist. This is resident artist David Eichelberger’s daughter, Louisa. It was a snow day and schools were closed in Mitchell County when we stepped into David’s studio for a visit. David and his wife, ceramist Elisa Di Feo, had turned on Alice in Wonderland for Louisa and her sister, Mena. The adults were attempting to get some work done. 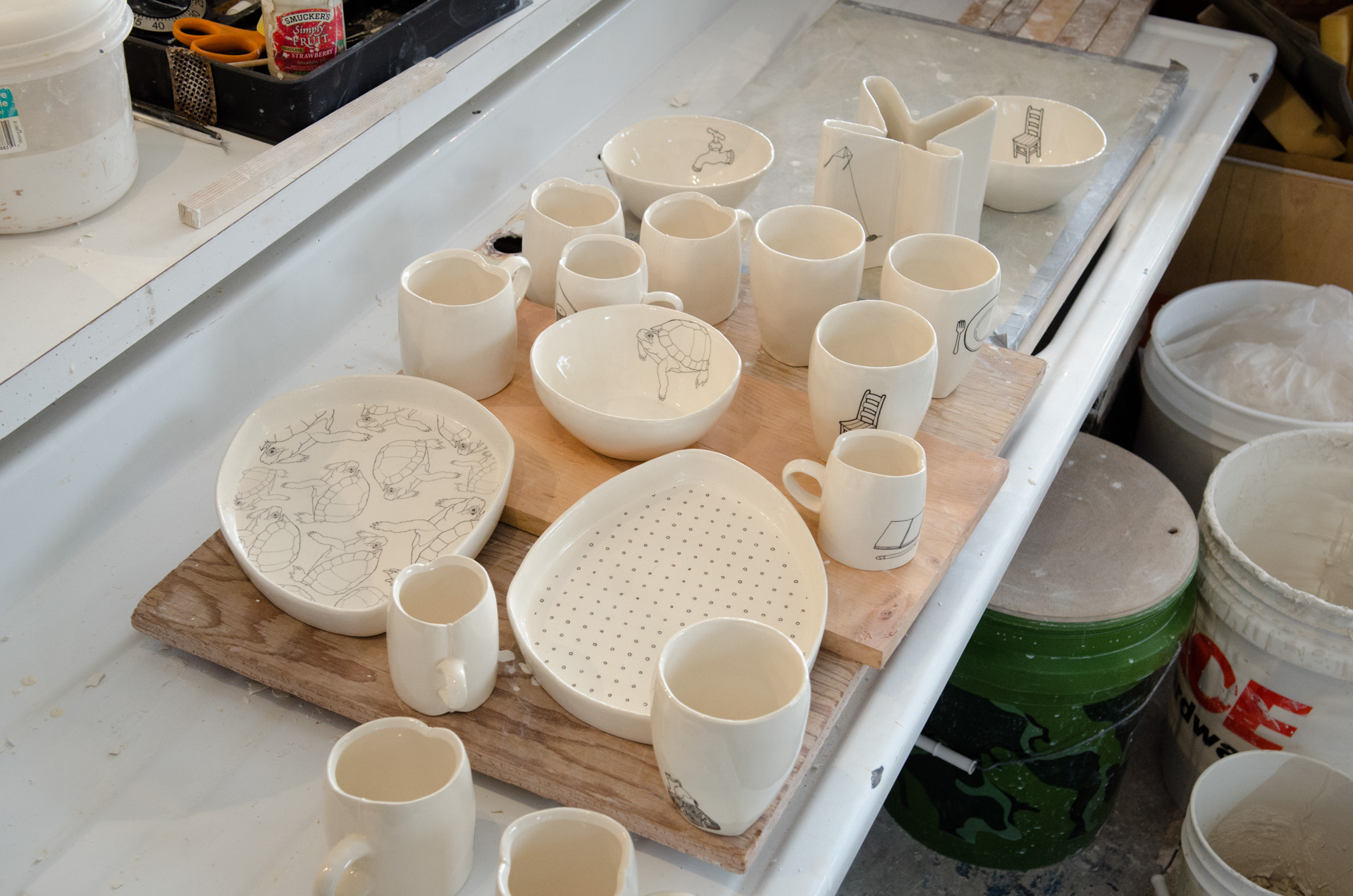 “It’s a bread and butter product line,” David noted, walking us through the cups, bowls, platters, and other ware he’s made in preparation for the New York International Gift Fair. The pieces are cast from molds, and then fired, and then glazed, and then fired again. Then David (or Elisa, who is helping the endeavor along), applies a laserprint decal to each piece. Finally, the pieces are fired again. Iron oxide from the printer toner interacts with the glaze. “The glaze under the image gets slightly molten, and it captures the iron oxide,” says David. 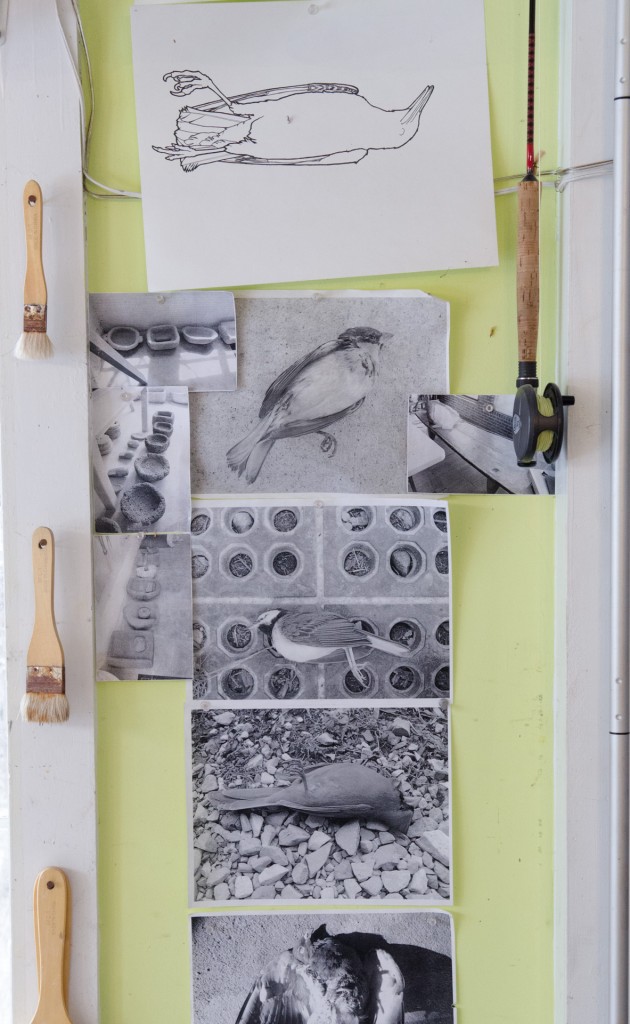 The resulting images on the vessels are casual and arresting: a fishhook, a frying pan. A turtle. A platter of turtles. Weird lures: a chair, a dead bird, an anatomically correct heart. “[The images] are everyday,” he says, “with a built-in plot. The user brings a story to it.” The drawings–the way they are drawn–evoke graphic novels, too. The objects feel removed from a panel, an “everyday” scene. Holding one of David’s cups, the image loses its primacy immediately to the feeling of the shape.

Meanwhile, in Alice in Wonderland, the March Hare looks at his watch and shouts, “I’m late! I’m late!” pulling the story into the next chapter.

The next chapter, for David (who completes his residency at Penland soon) is to remain in the area for awhile. Both he and Elisa have been adjunct instructors in Boone, and will stay on through Penland’s benefit auction, with David teaching an eight-week handbuilding workshop at Penland this spring and Elisa teaching at Penland in the summer. 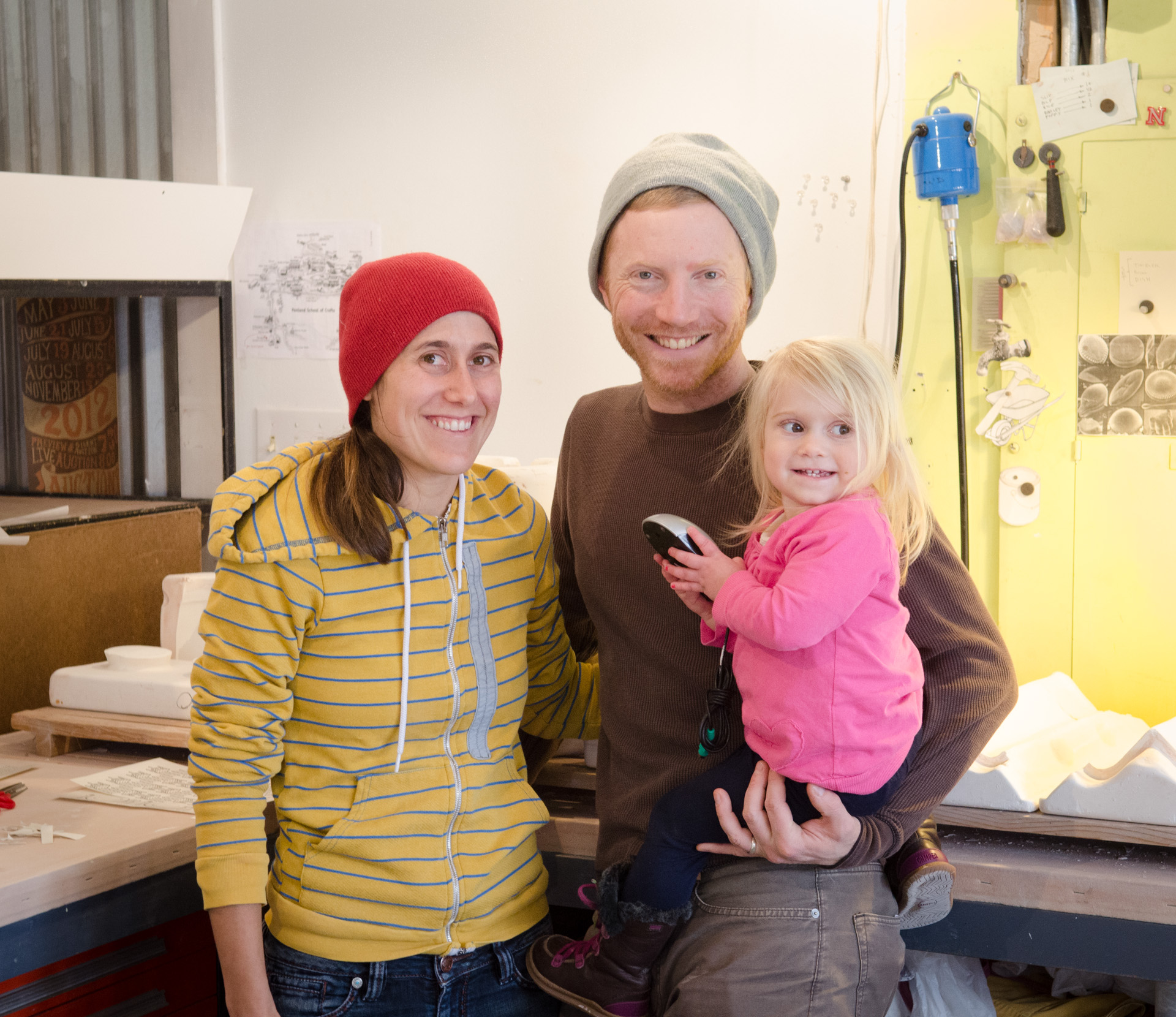 Both David and Elisa have worked a tricky balance the last three years: having a second child, creating their own work (David in residence, Elisa grabbing time in other studios), and working collaboratively on David’s pieces for the first time this winter. (“It’s Elisa’s turn next, David says, about the possibility of doing future residencies.) Their bread-and-butter studio collaboration will extend outward, too: David and Elisa plan to invite other clay artists, starting with Michael Klein, to make limited edition vessels with decals.

It’s not snowing steadily yet. Elisa has gone back to applying decals to pieces, and the girls are almost done with Alice. It’s the old Disney version, where the cups and saucers on the Mad Hatter’s table are stacked, falling, sloshing with tea: cracked, tossed, and bitten. Total chaos. The vessels in David’s studio are miraculously unscathed. As the March Hare’s watch is sunk in a cup, a heart on one of David’s cups flies a kite. 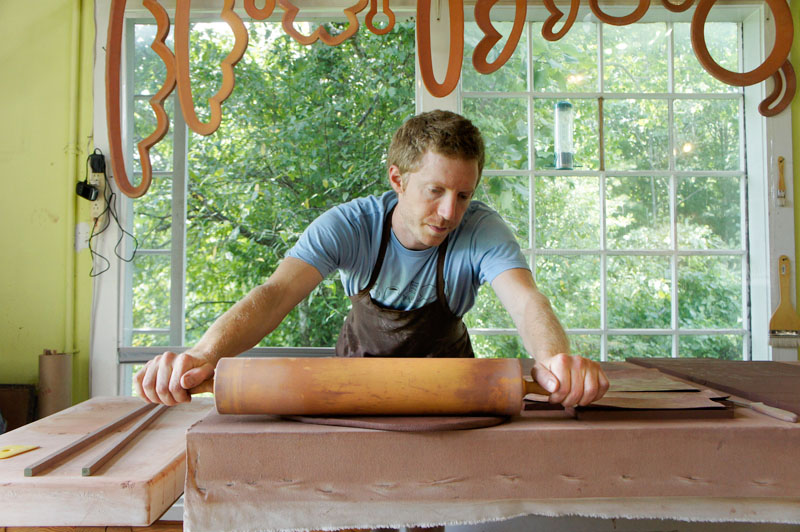 The concept embodied in a jar, a bowl, or any vessel for containment is, at its root, about generating a special place for something specific. The immediate connection someone has with a container regards its use. When we conjure an idea about using a container, we are practicing a basic ordering of our environment.  By selecting a particular something to live inside that place, we act in harmony with our desire, as human beings, to recognize patterns and order in the world.

Drawn objects on my work act on the same principle as their parent vessels–a desire for order–but through a different avenue. Just as we are quick to create uses for a container, we are quick to create narratives when given a set of props. Entire, elaborate stories blossom nearly instantly in our minds from the simplest of starts. I am interested in acknowledging Order by offering a setting for it to occur in a vessel, and by recognizing it in our need for Story, developed through imagery.—David Eichelberger

David Eichelberger
Form Focus
In the clay studio
In this workshop we’ll slow down and approach handbuilding in a way that will make every pinch count. Ideas will start with functional forms and grow from there. Techniques will include slab, coil, and pinching methods, bisque and plaster molds, and a variety of surfaces and finishes such as terra sigillata, sgraffito, and laser print decals. We’ll use earthenware clay and explore various firing possibilities. With the help of visiting artists and discussions, this studio immersion will be about ideas and how to realize them in clay. All levels, although some experience with wheelthrowing or handbuilding will be helpful.

In addition to simple laser-printed decals, students in David’s workshop will create, as a class, a silk-screened series of low-fire china paint decals in coordination with resources in Penland’s printmaking studio.

Students will also observe and pitch in, if they choose, on a slipcasting project generating molds and mugs led by David Eichelberger’s wife, artist Elisa Di Feo–but the main focus of Form Focus will be on handbuilding.

To find out more and register for this workshop click here.
Spring scholarship deadline is November 29.

Please note: applications need to be at Penland by this date to be considered for scholarship. Overnight service may not deliver to Penland’s campus on time, please plan accordingly.

David Eichelberger is a resident artist at Penland School of Crafts. He has taught workshops at the University of Nebraska-Lincoln and the Appalachian Center for Craft (TN) in addition to Penland. He has been a resident at Energy Xchange (NC) and the Appalachian Center for Craft. His exhibitions include Santa Fe Clay, Ferrin Gallery (MA), The Clay Studio (Philadelphia) and AKAR Design Gallery (IA), among others.

For the third time recently, David listened to the BBC program A History of the World in 100 Objects, and it continues to amaze him to think of how rich objects can be with information.