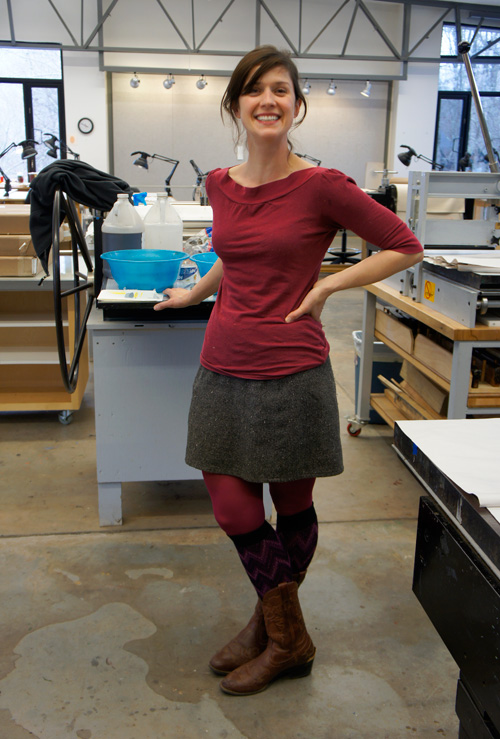 Erika Adams of Eating Dog Press is this year’s lead printer in the printmaking studio for the January residencies in printmaking and letterpress. These residencies offer artists and writers with little or no printing experience a chance to work in Penland’s studios with experienced printers, to create editions of broadsides, prints, or small publications. Erika facilitated the projects of two groups of print residents, each for a two-week session, and now has the run of the studio for the month of February to make her own work.

“This year, I’m on a self-funded sabbatical after seven years of teaching, first at Columbus State University in Georgia, then the School of the Museum of Fine Arts in Boston. I came to Penland from Boston, but that’s not really where I’m from. I grew up in a little town called Snoqualmie, southeast of Seattle, Washington. It used to be a logging town, now it’s a stop on the way to a ski resort. When I was eight, my family moved to Modesto, California (it’s where George Lucas is from). I went to college at the University of California-Santa Cruz, where I studied anthropology, adding a second major in art during my junior year. A few years later, I moved to Albuquerque and applied to the Tamarind Institute, a part of the University of New Mexico that specializes in lithography. I became a lithographer, and printed professionally there for a year, working with artists who were invited to come and do projects. I went to graduate school at the University of New Mexico.

I met (Penland’s programs director) Dana Moore in 2009, in Yuma, Arizona, at a symposium we both attended; she was presenting her work there. She asked me if I wouldn’t come to Penland to teach stone lithography, which is my specialty. That class was in the summer of 2010. When Dana found out I was on this sabbatical, she asked if I was interested in doing a winter residency, and it seemed like a perfect fit. I was envisioning this year as an opportunity to really explore my work and to think about what my next moves might be. So I took it, thinking this was a great opportunity that I could build around. I have a few other residencies and projects planned for spring. The fall was a little bit more open – I was in New York for a few months, did some work in the Robert Blackburn Printmaking Workshop, and took a trapeze class.

I have a printmaking friend who lives in New York, and she had taken a few classes and was looking for a buddy to go with her. When she first suggested it, I said,  ‘No way!’ But then I thought, “Well, why not? This is my year of exploration.” I don’t think I would actually run off and join the circus; I think I might actually be a tiny bit too old for the trapeze. It was physically challenging, but it was really fun. It was also death-defying. I’ve never done anything like that – I don’t skydive or bungee jump. I’m not really a thrill seeker, and when I was standing up on the platform with someone holding onto my belt, and I was leaning forward with all my weight, so I knew when that person let go, I was going… my heart was beating so fast I thought I might die.

At that moment, there was someone down below, yelling up instructions, and I just did everything he said, right when he said it. It felt liberating, in a way. It was sort of like drawing – taking my brain out of the situation, going straight from hearing to action, no thinking. That was really exciting. The second time I went, I thought a little too much, and I actually hurt myself, and then the third time I found a happy medium between worrying about dying and thinking too much. Which, in a way, is maybe a kind of meditation.

Lithography is great for people who like to draw, especially pencil or charcoal drawings; there’s a real affinity there because it feels direct. You’re drawing directly onto the stone and even though the image is reversed when you print it, it still has that quality like a drawing, which is quite different than etching or other types of printmaking.

The things I’ve been making lately all relate to my thinking about locating myself in the world, or within my relationships, or wherever I happen to be. I made a portfolio print at the end of the residency and decided to involve some letterpress. I’ve been using more text in my work  lately, and I’m excited about doing even more of that. I like there to be an element of storytelling in my work, and usually I leave it up to the viewer to make up their own story, but lately I’ve wanted to be more directive. I’ve decided to make a series of three prints based on the one I made a few weeks ago, but a bit larger, and I’m going to involve some text, but I’m not sure what that will be yet.

I’ve been working with these outlines of wrestlers for a long time. In the beginning, the work was about violence, about struggles within relationships, and the fine line between something that’s violent and something that’s loving. After a while, I thought I was done with the wrestlers, but in my studio they kept coming back up, and they became more like designs, like doilies. I think it was something about sublimating the violence in them and thinking more about the relationships, and what happens when relationships overlap, when people overlap – what kind of things get made when that overlap happens. I’ve also cut away paper from some prints; there’s one that looks like lace because I’ve cut away so much paper and just the outlines are left. I like that idea, that something that started off with one set of ideas could transform entirely into something else.”

You can learn more about Erika and see more of her work by clicking here to visit her website.

You can click here to learn more about Penland’s January print and letterpress residencies.