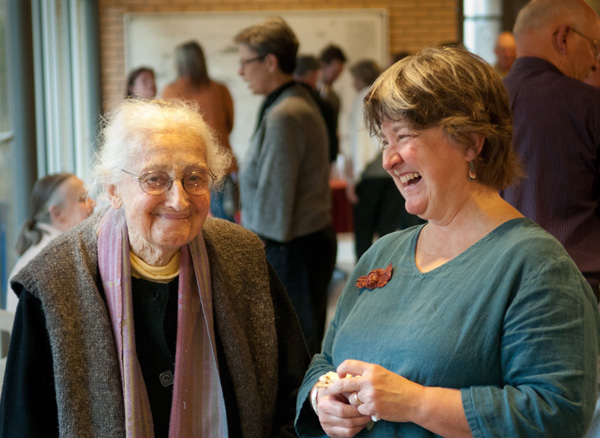 This is the great ceramic artist Karen Karnes talking to Penland archivist Michelle Francis at the opening of the Penland Gallery exhibition Many Paths: A Legacy of Karen Karnes. This show features six of Karen’s pieces along with work from thirteen other potters who have close ties to Karen. It’s wonderful show of contemporary pottery.

Karen Karnes is one of the most important figures in twentieth-century American ceramics. She was a resident potter at the famously influential Black Mountain College, where she came in contact with some of the great figures in Modernism. She carried this influence into her ceramics, which in turn affected the work of countless other ceramists. Although she taught infrequently, she did teach at Penland in 1967, and it was at Penland that she first experienced salt-glazing–a technique which was an essential part of her work for many years. 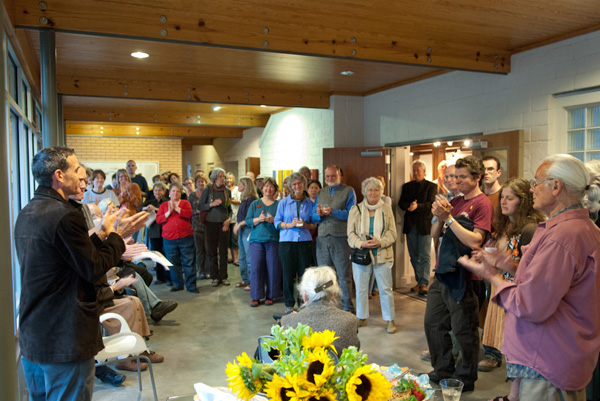 Here’s the opening night crowd applauding Karen (who is seated in front of the flowers). Her close friends and fellow potters Mark Shapiro and Paulus Berensohn are at the far left and right of this picture. The Penland exhibition is presented in conjunction with a touring retrospective of Karen’s work, titled A Chosen Path, which is on view at the Asheville Art Museum through June 26. A book about Karen’s work, also titled A Chosen Path, was edited by Mark Shapiro and has been published by University of North Carolina Press. And she is the subject of a new film by Lucy Massie Phenix, called Don’t Know, We’ll See, which is available on DVD. 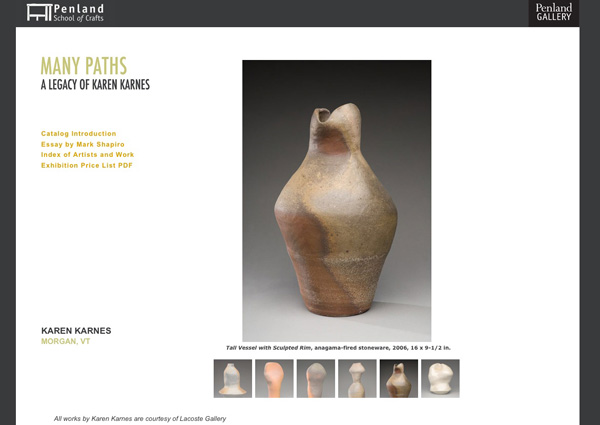 The Penland show runs through May 8, and we have published an online catalog with pictures of all the work in the show, an introduction from gallery director Kathryn Gremley, and an essay about Karen’s life and work by Mark Shapiro.