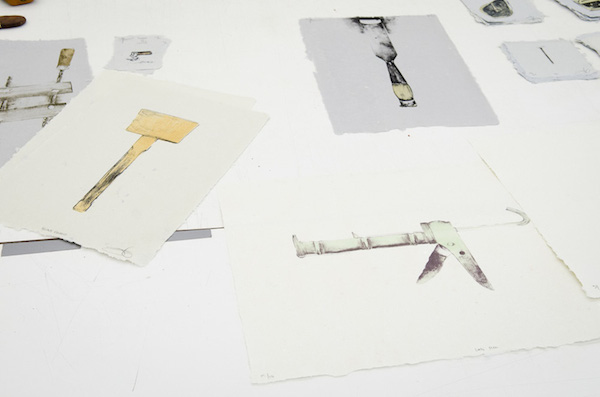 Jay Fox places his work on the table: a hammer. A caulk gun. A much smaller print depicting a screw. The prints cover the table. Black lines and markings play against pale, considered colors. The tools without a box float in the flecked and thready shades of handmade paper. A carpenter’s tools, images of tools; why this kind of care for representing them? 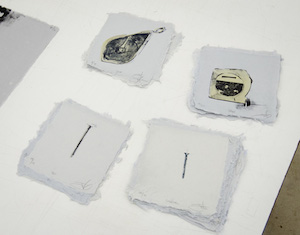 The litho/relief prints, Jay tells us, were part of his MFA thesis exhibition at the University of Wisconsin–Milwaukee, a show he put up while transitioning into his new role as Penland’s print, letterpress, paper, and books studio coordinator. The show, called “From the Ground Up,” turned the gallery into a transitional work space–fresh paint smell and all. Viewers encountered custom-sized drawers that Jay made to house the stacks of just over 300 tool prints. He set up an “honesty box” for anyone who wanted to buy, and he priced each image (printed on 50/50 cotton/abaca paper that Jay made himself) with the retail price of the tool the print depicted. The print’s sale, then, echoed the object’s actual purchase. 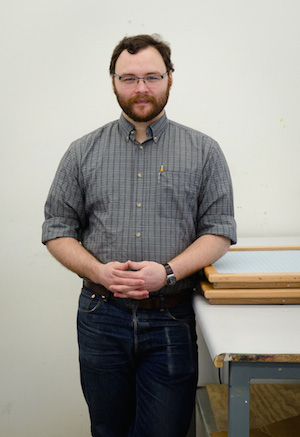 The tools in these prints belonged to Jay’s father, “and had been sitting around in Morganton since my dad died fourteen years ago,” Jay says. The prints are titled. “Shrapnel,” is the name of the screw. “Long Pull”–the caulk gun. “Pocket Full of Worry,” is a print of an unwrapped, unfinished roll of antacids. In the prints, a pause for each object’s singularity and an indifference to any narrative beyond what might be suggested in the titles. When I ask about  them, Jay doesn’t skip a beat. “I was thinking of the titles as somewhere between action and idea,” he says.

As one of the newest members of Penland’s band of artist-coordinators, Jay is happy to report that he has found in his role a reliable flow of print nerds. Bourbon nerds, too. Penland also marks Jay’s homecoming to North Carolina after his years of undergraduate and graduate work. “In Georgia [as an undergrad at SCAD] I was ‘the guy from the mountains.’ In Milwaukee, I was the Southerner that everyone came to look at, and I felt like it was my duty to portray it well,” he says in a half-jesting way. 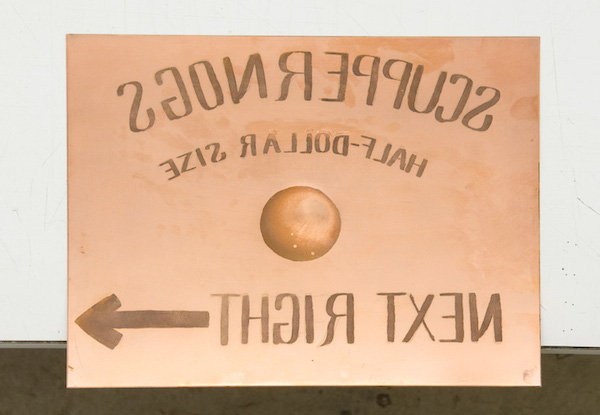 Now, when he’s not tending to Penland Print, or getting hitched (Jay and his wife, Molly Evans, married last January), Jay brakes for curious road signs. He plans to work on a series of prints based on signs like the one on the plate above, spotted near his wife’s parents’ house in Georgia. “I love the homemade quality to this sign, says Jay. “I’m thinking about making work in the region I grew up in rather than making work about where I’m from.” Jay pauses. “That’s where I am with it, at least for now.”
—Elaine Bleakney; photographs by Robin Dreyer

More about Jay Fox’s thesis show, “From the Ground Up,” on Printeresting.