One day last winter, I ran into Daniel Beck in the coffee house, and asked him how he was. “Not great,” he said. “I’m down. Not really sure why.” He said it to a few of us. Nothing in his voice induced worry. No one clipped the moment with concern or sympathy. The room paused, and held what he said. That was it.

Months later I’m looking at “Entry,” Daniel’s inflated steel sculpture, shown above. The coffee house moment comes back. How do we make space for what we can’t say? Outside the fond ambush of being social—how do we make ourselves known? “Entry,” for start, might give someone’s lonesomeness a landing place.

“Entry” began, Daniel says, with an idea about thought bubbles: white, graphic space that hosts speech. The  steel is thin to the touch, and the welded seams at the sides of the hollow add another signature of intention. “I get super snapped in, welding those,” Daniel says about the seams with firm delight. “I want to make work that’s visually direct, but the process, for me, needs to be challenging.”

Part of the directness in this piece is the black strip: coal dust and fire scale applied to white paint that continues, down the “soft square,” below the seam. “The black mark is the material,” Daniel says, “a way to keep with the material’s integrity.” And then he adds, in his thorough chuckle, “It’s totally a door to me.” Daniel’s friend, Ian Henderson, recently wrote about “Entry” and Daniel’s work at large for the Penland Benefit Auction e-newsletter. (“Entry” will be auctioned at this summer’s event.) Ian marvels: “Nimble, efficient construction somehow produces visual heft in one piece and cloud-like lightness in another.” 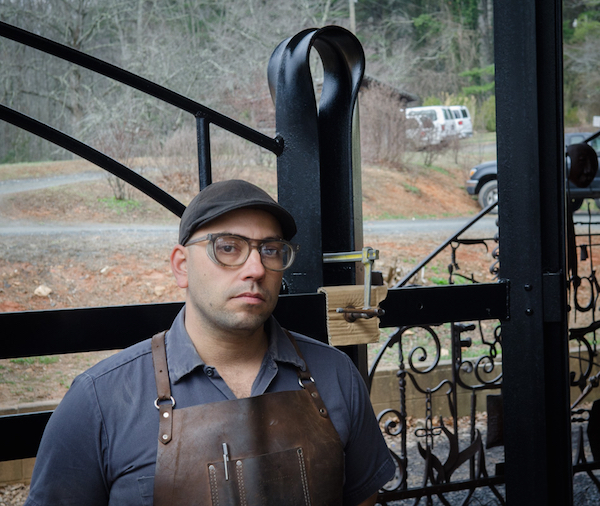 This winter, Daniel set up his studio space in what used to be Canipes Wrecker Service in downtown Spruce Pine. He also worked on multiple projects in Penland’s iron studio. One, a huge steel frame to anchor a roadside sign welcoming drivers to Spruce Pine. (One end of this frame can be seen behind Daniel’s shoulders in the portrait above). In another wintertime feat of heft, Daniel made a blacksmith’s ideal work table, constructed side by side with his friend, resident artist Andrew Hayes.

As Penland’s able and amiable iron studio coordinator, Daniel finds ample chance for friendship, collaboration, and a consistent soundtrack of power hammers and forging. Quiet can be hard to come by. Why not take over a local auto-body shop in the name of space, time, thought, and abstraction? We won’t intellectualize it. We’ll call it awesome and leave it at that.