Decoy 1 is the first finished piece in a new series by Penland Resident Artist Adam Atkinson. Adam plans to create a number of carved, game bird “decoys” that may be interpreted in different ways by different communities. Introduced to hunting culture as a boy in Idaho, Adam’s work both embraces and subverts the visual language of this “masculine” pursuit. When it comes to the decoys, he is still unpacking their meaning as the series develops. “Who am I fooling, and for what reason… that is something I am still exploring,” he told us. 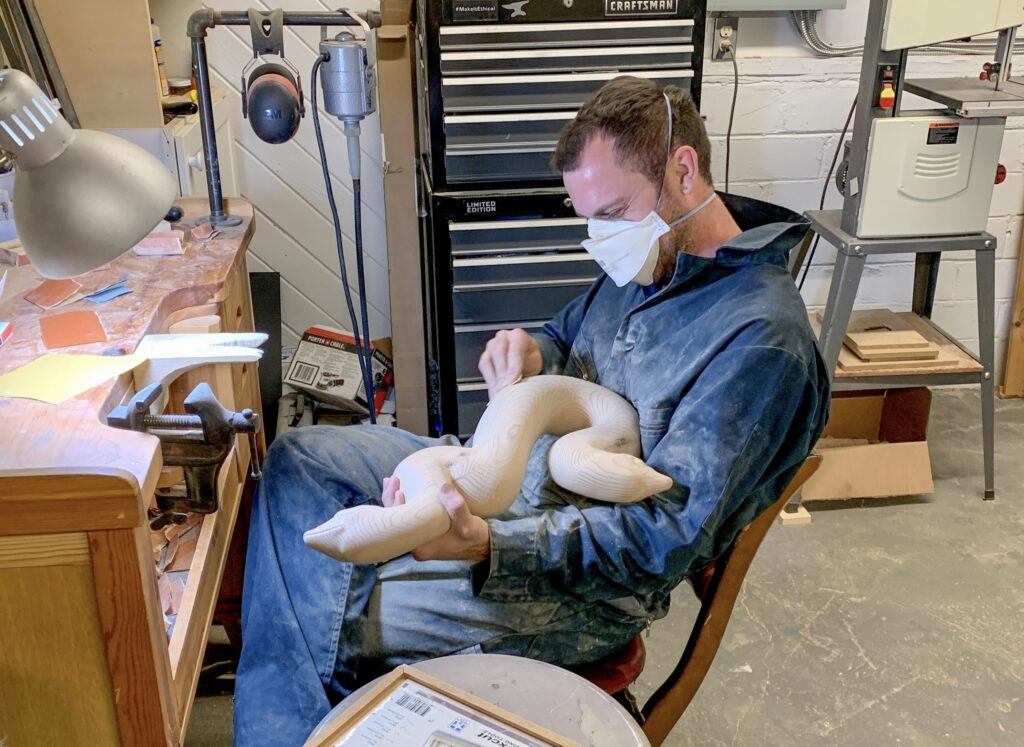 The figure of the goose has a special significance for Adam. As a child, his dad once encouraged him to harvest one by wringing its neck. “I couldn’t do it,” he said, “because I was scared and the goose was really angry.” Looking back, Adam sees this moment as a crossroads. “At that moment I sort of failed, maybe for the first time in a significant way, to prove my masculinity.”

Made from gorgeous cedar and representing over 40 hours of skilled carving, the two-headed goose will be featured this summer in the Penland Benefit Auction.

Currently halfway through a three-year residency at Penland, Adam is using the time to grow and explore. “I’m extending my knowledge of different processes,” he told us. “I’m studying enameling, doing more wood carving, and making larger sculptures.” Adam has also been able to build out his studio, investing in equipment that is kinder on the body. Decoy 1 is one of the first pieces created on Adam’s new wood bench, which keeps his work steady for carving. The wood bench is literally a big step up from working on the hard concrete floor and was purchased through a grant awarded by the North Carolina Arts Council. 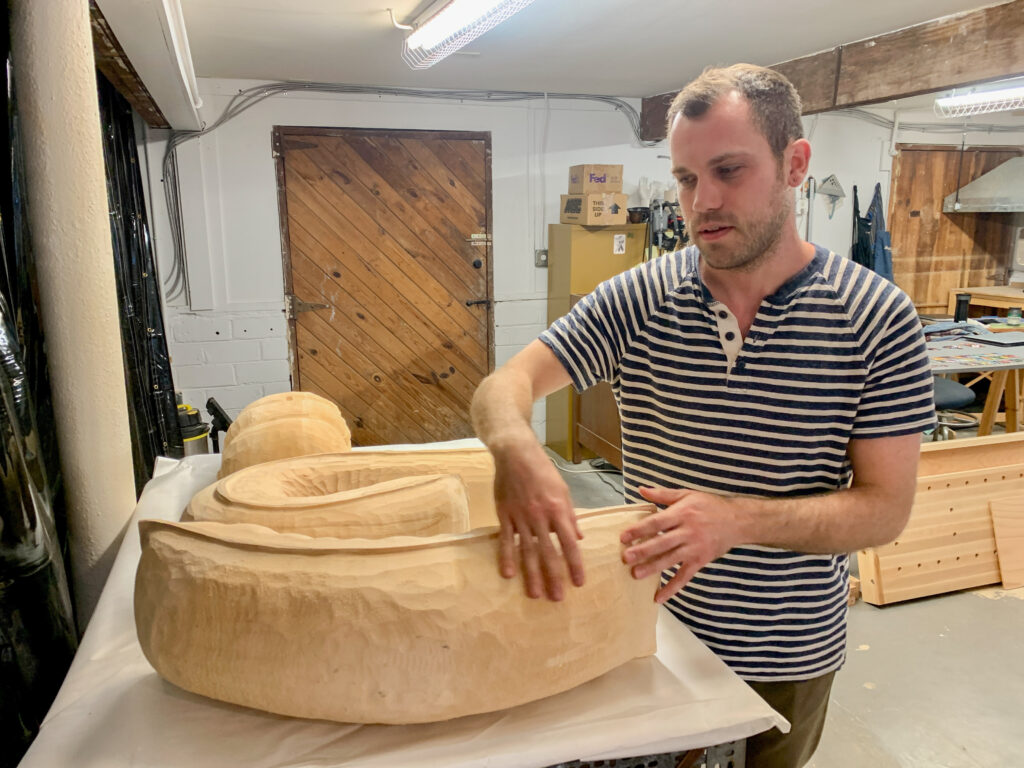 Woodcarving has been an integral part of Adam’s art practice since he first explored sculpture at Boise State University as an undergraduate. “After I made my first wood carved sculpture (a carved face in wormy maple) I was hooked, and began using it in my jewelry and sculptural works,” he said. Learning through “a lot of trial and error,” over the past decade Adam has become a skilled carver. In addition to the “Decoy” series, Adam is also working on several larger-scale works that will make use of his growing skill and tools.

We invite you to support Adam’s work. Follow his journey on Instagram @adamatkinson, visit his website to explore more of his work, and find works for purchase in the Penland Gallery.

This fall, the Penland Gallery will host Tender Presence, a group exhibition co-curated by Adam and fellow Penland Resident Artist Everett Hoffman in the John and Robyn Horn Gallery. 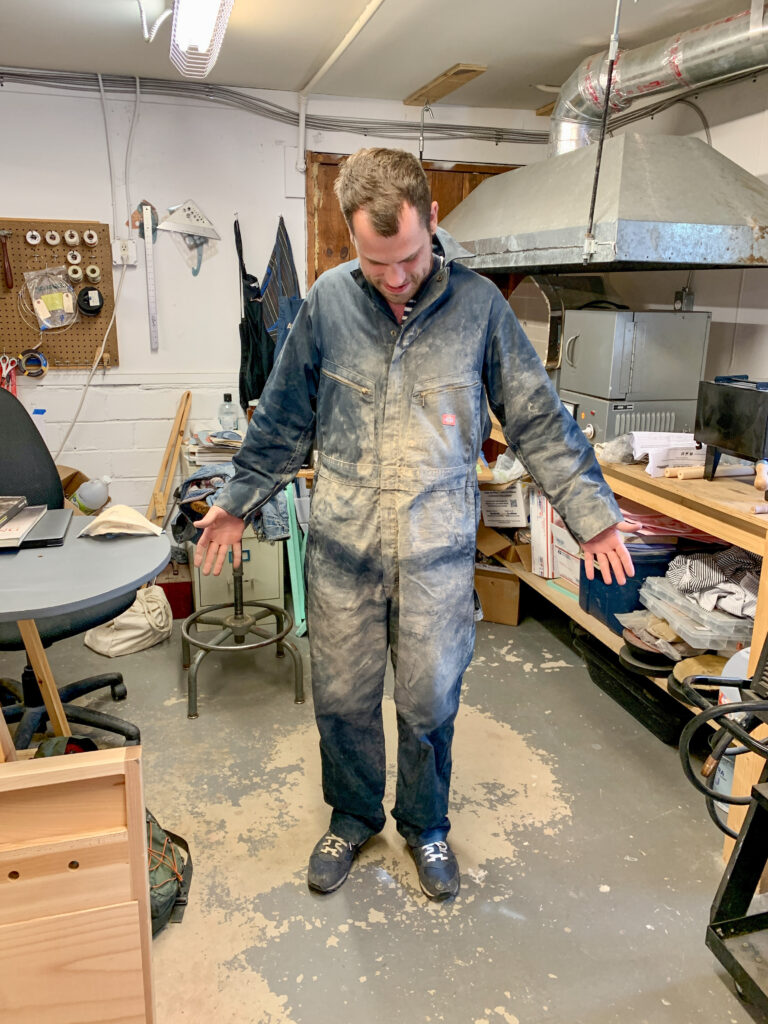 Adam Atkinson is a metalsmith, curator, and educator. He received an MFA in metal design at East Carolina University and a BFA in interdisciplinary studio practices at Boise State University. Atkinson’s work documents relationships between gender and the body using adornment and small-scale sculpture as formats for exploration. His work has been exhibited nationally and internationally including the Wayne Art Center, Boone Art and History Museum, and Nagoya Zokei University, Nagoya, Japan, among others. He was awarded numerous residencies including the Emerging Artist Residency at the Baltimore Jewelry Center and is currently in a three-year residency at Penland School of Craft. He was faculty at Virginia Commonwealth University, Boise State University, and has taught workshops across the country.

Check out this short video about Decoy 1!