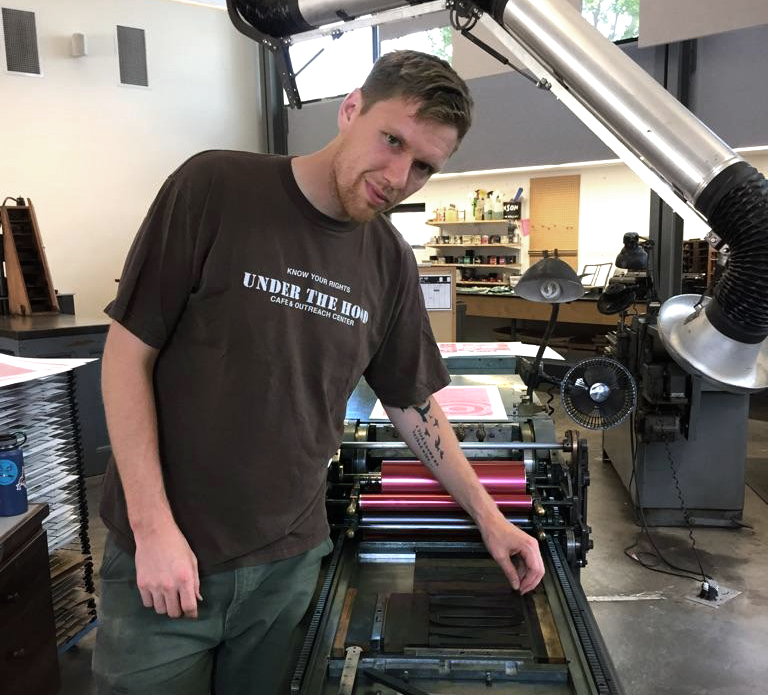 Art, activism, performance, protest—for Aaron Hughes, the lines between them are blurred and insignificant. “All my work is about creating stories and sharing stories,” he explains. “I’m trying to find space for people to bridge the divides we have in our world through art and through stories.”

As a veteran who served in Iraq and Kuwait for fifteen months in 2003-2004, Aaron is sharply aware of those divides. His deployment introduced him to a rougher and more complex world than he’d known growing up in the Midwest. “I felt like the ideas from my upbringing, my religion, my country didn’t make sense anymore,” he remembers. “But what did make sense was art. I felt like art was something I could invest in and believe in and put my energy into. It was something creative and not destructive.”

Aaron came home from his deployment determined to use art as a tool to generate conversations and connections about difficult topics like war, trauma, and oppression. In 2006 he graduated from the University of Illinois with a BFA in painting, and in 2009 he received his MFA in Art Theory and Practice from Northwestern University. Then he went on to work with organizations such as the National Veterans Art Museum, Iraq Veterans Against the War, and the Center for Artistic Activism.

In the summer of 2013, Aaron came to Penland for the first time with a Windgate Charitable Fund Scholarship. “I had spent so much time helping others to tell their stories and listening to other people’s stories that I had neglected any kind of personal work I needed to do,” Aaron explains. “I applied to Penland as a part of my transition back to focusing on my own art practice.”

He has returned to Penland each summer since to take classes in the printmaking and letterpress studios. “One reason I’m super invested in the printmaking program is that I’m interested in the way printmaking and politics can help to popularize language, stories, and movements,” he says. The connection is clear for Aaron: “Your ability to communicate lies in your ability to execute a craft. That’s what I’ve been gaining each time I come to Penland—the opportunity to develop my craft and to improve my communication skills.”

Aaron readily admits, however, that his time at Penland has been about more than gaining skills in the studio. “Penland is a generous space for me as a veteran,” he explains. “It’s a place of transformation and growth and learning. I’ve been encouraging other veterans to apply there because it’s such a healing, generative space.”

When he’s at Penland, Aaron describes himself as a “studio hound.” “I just want to make, make, make, make, make,” he laughs. But Aaron also values the quieter, more contemplative moments on campus. He describes the short walk back from dinner to the print studio: “There’s a little bench that’s halfway. I’ve often enjoyed sitting there, embracing the evening as it approaches and watching the Appalachian dusk. It’s so beautiful—transcendently beautiful. And I just sit in between all this creativity and embrace the present moment of being there. I feel like that’s healing. That’s wholesome for anybody.”