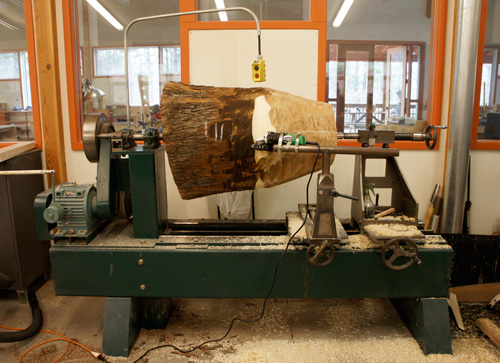 Spring wood instructor Mark Gardner and studio assistant Wyatt Severs are using an angle grinder strapped to the toolrest to turn this great big log into round on the lathe. They plan to make a gigantic bowl out of it. 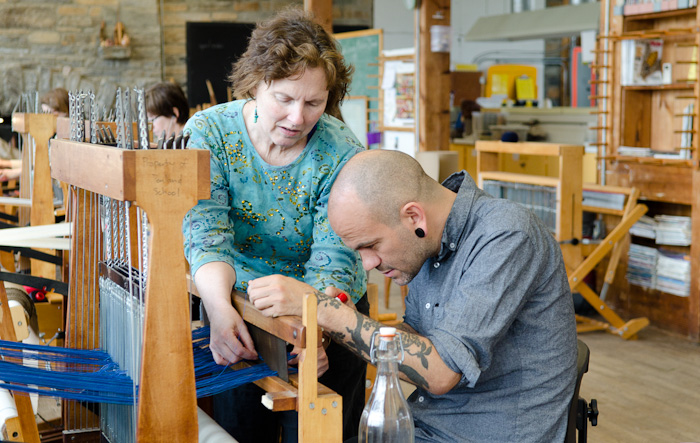 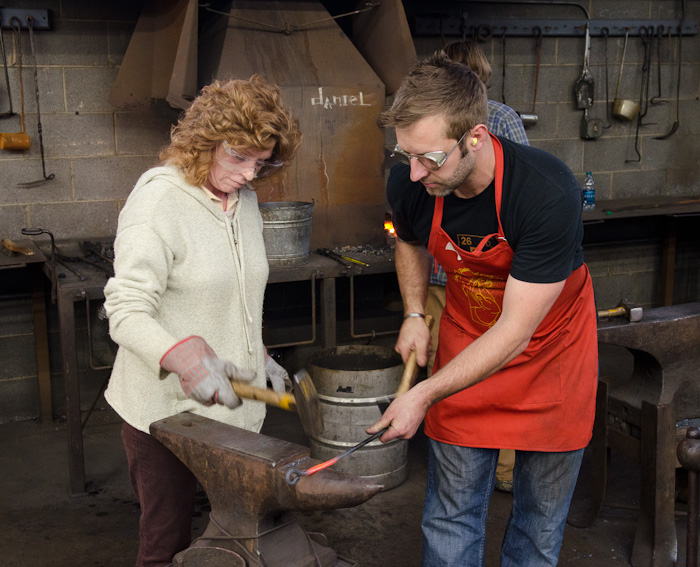 Volunteer Mike Chmielewski working with a visitor to the iron studio during Penland’s annual Community Open House, which took place on Saturday, March 3. One-hundred and sixty volunteers, 500 visitors, and most of the school’s staff spent the afternoon on activities in most of Penland’s studios. You can see a big album of pictures here. Join us next year on Saturday, March 2.

Core fellow Seth “Thor” Gould, using a power hammer to shape a hammer head in the iron studio. Seth has been making a bunch of new hammers for use in the metals studio.

We are in the process of taking down the old Homosote building, which has been replaced by some new housing built this year. Much of the material in the building is being recycled by community members, and when the ceiling was removed, these elaborately decorated rafters were discovered. Perhaps this is the key to finding the long-lost Penland gold.

(Don’t get excited; there’s no such thing.)

Here’s a bunch of people installing a new milling machine in the downstairs metals studio. This is just one of dozens of studio improvements going on this winter. It’s a good thing we shut down for a while every year or we’d never get anything done. (Photo by Amy Tavern)

This may not look like much to you, but to us, it’s a beautiful sight. This section of the Penland road, which lies between the school and the post office (not to mention the homes of many staff members), has been closed for months. It was falling off the hill and the only solution was to move the road. This involved a number of large machines, a bunch of workers, and a lot of dynamite. Yesterday, they opened it to traffic (it will be paved after it’s good and packed) and our detouring days have come to an end.

Nobody is happier than Bill Ford, who drives to the post office twice a to pick up and drop off the school’s mail.