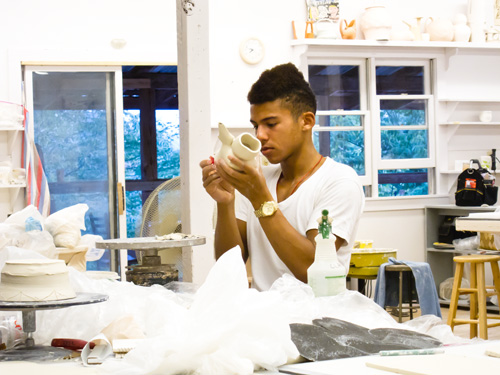 For Alex Anderson, from Seattle, Washington, a workshop with potter Sam Chung at Penland was a perspective-changing experience. “Before that, I avoided handbuilding, because I saw it as imprecise and less elegant than thrown forms,” he admits, “but the techniques I learned from Sam expanded my understanding of what is possible with clay.” In Sam’s class, Alex felt encouraged to explore altering the forms he throws on the wheel, and combining handbuilt and thrown pieces. “It changed my approach to my work,” he says.

Alex’s participation in Fusing Form, Surface, and Idea, in the clay studio in July and August, 2010, was made possible for him by the Orville and Pat Chatt Memorial Scholarship. Named in honor of the parents of recent Penland resident artist David Chatt, also a Seattle native, the scholarship offers full tuition for a summer session to a student living in the Pacific Northwest who shows artistic promise and financial need. “I would definitely not have been able to take this class without a scholarship,” Alex says, “because my college tuition is quite high, so an additional educational expense would not have been possible. I’m grateful for this wonderful opportunity.”

Now in his junior year at Swarthmore College in Pennsylvania, majoring Studio Art and Chinese, Alex is spending the current semester abroad, exploring and studying China’s famous “city of porcelain,” Jingdezhen. “So far I have been exposed to amazing artists and masters of every segment of the ceramic world whose families have worked in their respective fields for generations,” he relates. “It is truly exciting to be in a place where tall porcelain vases line the streets and artists’ studios are everywhere and always open.” Alex has been keeping a blog to document his adventure in China, and its effect on his own work in ceramics, which you can follow online at http://alexandersonceramics.tumblr.com/

Alex describes his current studio work as functional sculpture. “I appreciate a strong, functional teapot or vase, but I also like my work to have meaning,” he says. “However, I also make many pieces with the simple purpose of being beautiful.” He recently finished a series of oyster-shaped teapots intended to represent the process of creating beauty and value from negative experiences, inspired by the manner in which oysters deal with irritants by turning them into pearls. He plans to work next on a series of vases, beginning with the idea of “the societal pressures people face to achieve an image that aligns with what they consider to be attractive.” “Beauty,” he adds, “is a powerful force.”