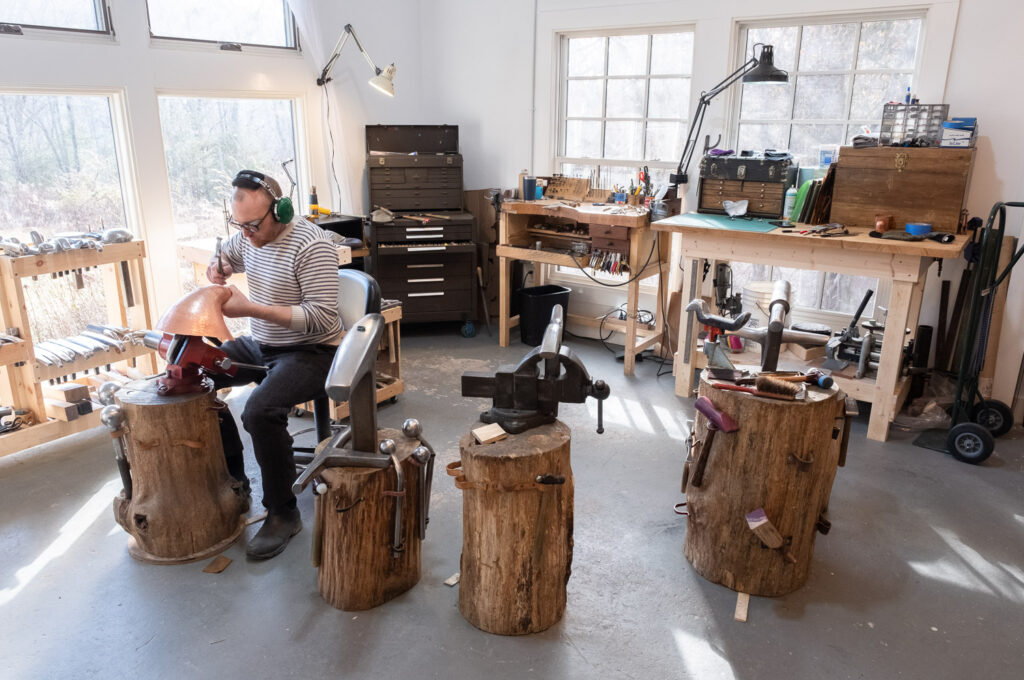 Metalsmith Adam Whitney’s resident artist studio is a small building just behind the old dairy barn that houses five other resident studios. You can tell when he’s working by the ever-present sound of a hammer tapping on a metal sheet. “I think they put me back here so I wouldn’t drive everyone else crazy,” he laughed.

Although Adam joined the resident artist program last fall, he is no stranger to Penland. He has taught in the metals studio several times, he’s participated in every winter residency, and he was the school’s metals studio coordinator from 2007 to 2011.

He has experience in many kinds of metalsmithing, but his true love is raising: the craft of making hollow, three-dimensional forms from sheets of metal. His current projects are inspired by drinking vessels and the space program. He has made a series of cups that resemble a spacesuit helmet, and he is methodically developing a complex form based on the rhyton of the ancient Mediterranean. This is a horn-shaped vessel with a drinking hole at the bottom. The hole was often part of an animal head or torso fitted onto the end of the horn. Adam remembers seeing these forms in museums when he was first getting interested in metal work. “They were the metal shapes I was in awe of,” he said.

Adam’s rhyton will end with the torso of a spacesuit. While he is currently working on prototypes of the vessel and the suit in copper, the final piece will be silver. Raising the intricate form of the spacesuit is an admirable technical challenge, but that’s not the only thing that drew Adam to this image.

“I think the spacesuit is a phenomenal piece of technology,” he said. “It’s actually a vehicle. It’s the tiniest possible vehicle for a person, and it’s used in the harshest environment.

“Nobody really knows why the drinking horn with an animal on it exists, but it probably had to do with some kind of embodiment of the animal’s power through drinking. I wanted to put something on mine that would represent the culture I’m in now. For me, space exploration is the most fascinating thing that has happened in a long time. It’s a new frontier where we have just barely scratched the surface, and the space suit encapsulates that and puts it in human form.”