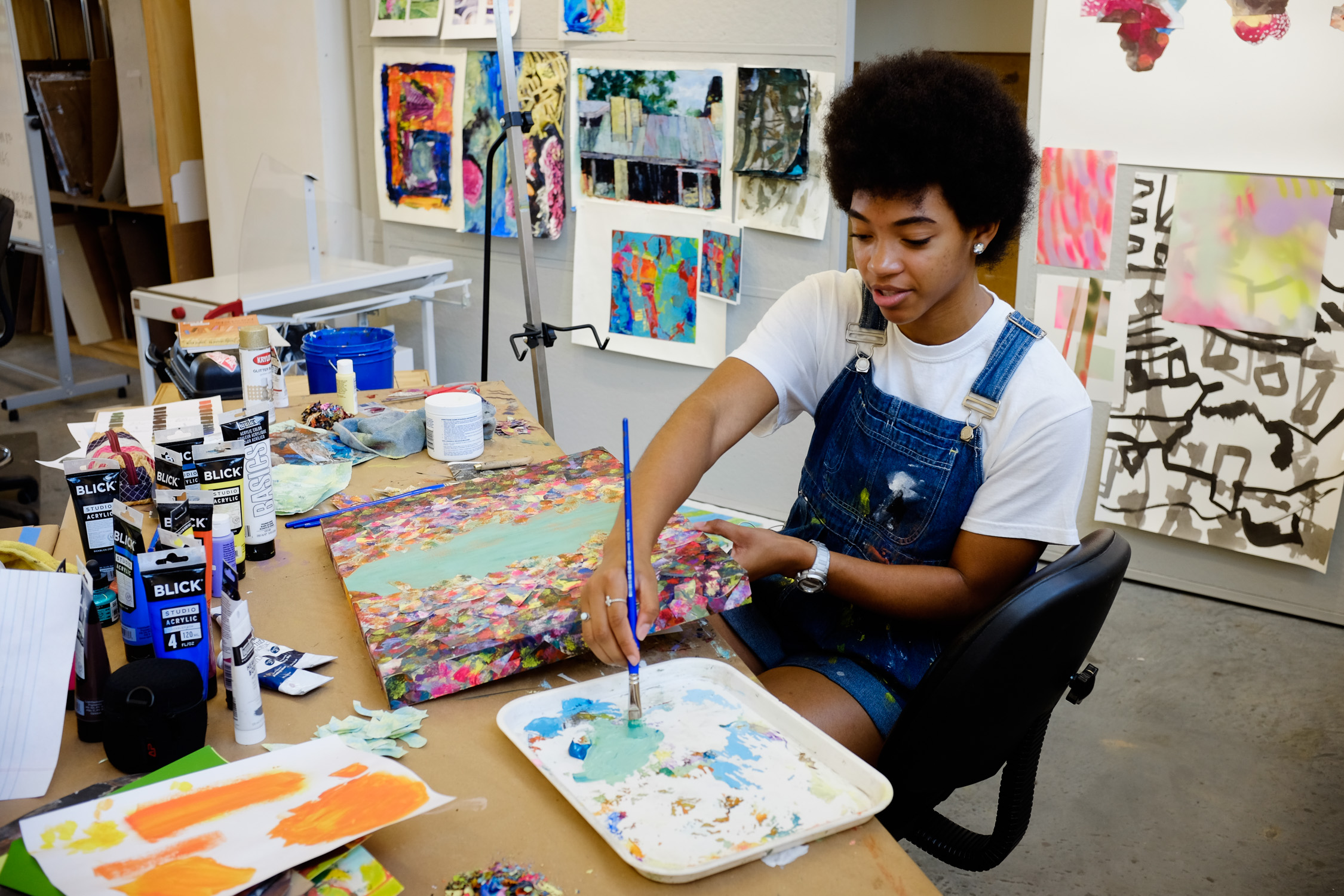 Sheridan Davenport was a student this summer in an abstract painting workshop taught by Tonya D. Lee. Sheridan is a student at Xavier University in Ohio, where her advisor is Kelly Phelps, a regular instructor at Penland. Kelly encouraged her to apply for a scholarship to attend Penland. “I haven’t done much abstract work,” Sheridan said. “But I loved Tonya’s work so much that I had to take this class. It’s definitely opened things up for me.” 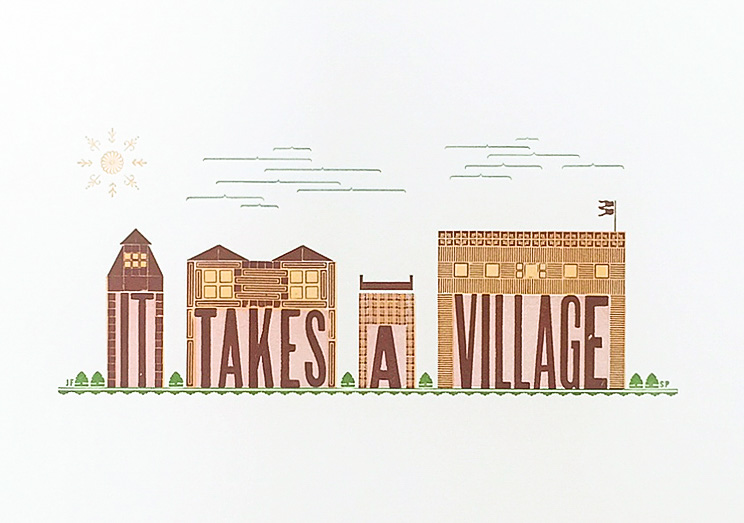 Typesetting generally involves putting one letter after another, making sentences and that sort of thing. This fall, however, you have an opportunity to expand your understanding of this age-old craft, or–depending on how you look at things–to learn the basics of letterpress printing without getting bogged down in pesky proofreading.

Ornamental Letterpress, a rollicking one-week fall workshop (October 22-28) taught by Jennifer Farrell, will explore the tradition of using type ornaments to create pictorial images and large letterforms. Open to beginners and experienced printers alike, this workshop will cover printing and typesetting basics and expand your concept of what can be done with metal type on a press. 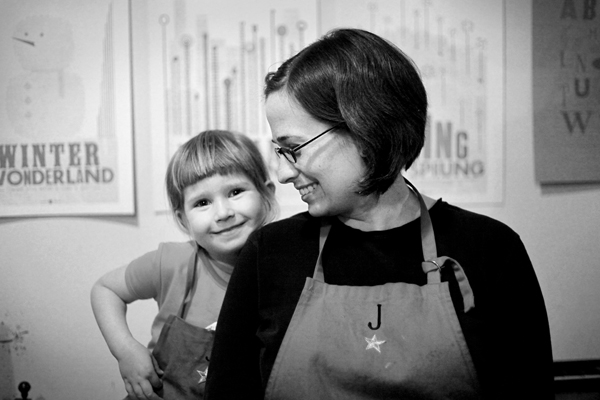 Jennifer is the owner of Starshaped Press in Chicago where she makes posters, prints, business cards, invitations, music packaging, stationery, greeting cards, of course, intriguing images made from type ornaments. “Since 1999 we’ve stayed true to the original craft of letterpress disregarding the naysayers that claim antique metal and wood type is too limiting for quality design,” her website proclaims. “As an old fashioned shop with solid presswork and hard working midwestern gumption, we buck popular trends in modern, ‘couture’ printing. We are proudly one of the very few shops in the country working to preserve, promote and print entirely like it’s 1929.” 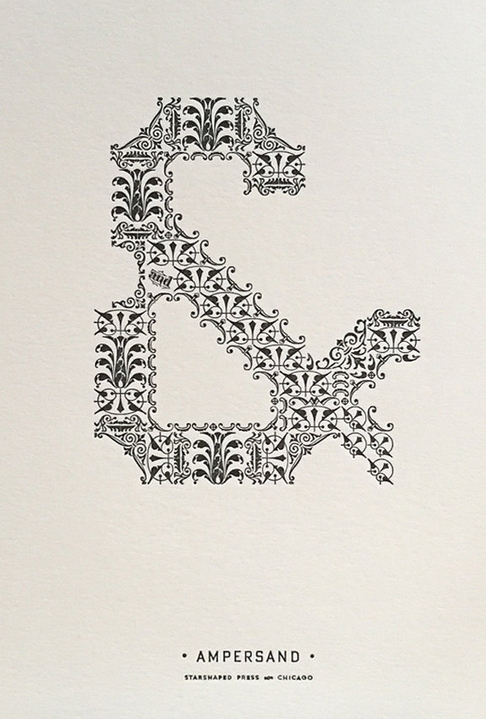 Jennifer has taught at the Hamilton Wood Type and Printing Museum and the Wells College Book Arts Center, and conducted workshops at Western New York Book Arts Center and Columbia College Chicago Book and Paper Arts Center. Her print work has won numerous awards and has been featured repeatedly in How magazine. Jennifer also appears in the new film Pressing On: The Letterpress Film, currently screening all over the place.

You can see lots of Jennifer’s work on her website and read about her adventures on her blog. Here’s a little interview with her as well.

Jennifer Farrell  – Ornamental Letterpress
The best way to understand type and printer’s ornaments is to study them in their metal form. This workshop will improve your understanding of typography so your letterpress work (whether you are a beginner or a seasoned veteran) can improve and move beyond initial experimentation. We’ll explore the tradition of using ornaments to create pictorial images and letterforms. All students will create images that, depending on ability, may be simple one-color pieces or more intricate multicolored prints. We’ll address common problems in hand composition as well as type that presents aesthetic challenges. We’ll look at tips and tricks to get the best results from both new and old metal type. All levels. Studio fee: $55. Code F02L

Registration and fee information here. If you have questions, call 828-765-2359.
All upcoming print and letterpress workshops are here. 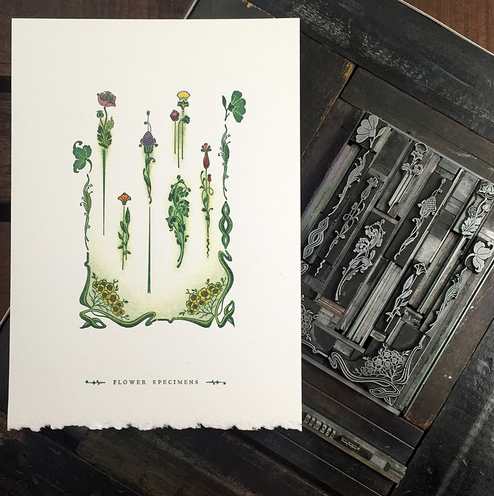 On August 12, shortly after the last piece was sold at Penland’s annual benefit auction, Jerry Jackson got in his car and headed for Brasstown, North Carolina where he joined the staff of the John C. Campbell Folk School as its new director. “I started at Penland as an auction volunteer thirteen years ago,” Jerry said just before he left, “so it seems fitting for me to finish up at the auction.”

Three years after that first auction, Jerry moved to Penland to become deputy director, a new position that carried responsibility for much of the day-to-day management of the school so director Jean McLaughlin could focus on  relationship building, fundraising, strategic planning, and national representation of the school. At his going away party, Jean simply said, “I couldn’t have done my job the past ten years without him.”

Jerry came to Penland after eight years as the cultural arts administrator at the Rocky Mount Arts Center in Rocky Mount, North Carolina. At Penland he assumed supervisory responsibility for facilities, student services, food services, human resources, and information technology, working closely with the managers of each of these areas. He also worked with the finance director and two dozen staff members to develop each year’s budget and he was involved in strategic planning, campus planning, financial planning, and marketing strategies.

He brought with him considerable skills in designing and outfitting spaces and was integrally involved in Penland’s most vigorous period of facilities improvement. He helped develop the new studios for drawing and painting, book arts, photography, and papermaking, plus renovations to the clay and metals studios. He also worked on the new Northlight social hall, the renovation of The Pines and Horner Hall (including the Penland Gallery), several new housing buildings, and most recently, the restoration of Dora’s Place, a log farmhouse that dates back to the early 20th century.

Jerry worked constantly. He was always on call, and he got a lot of calls: everything from medical emergencies to people upset about a moth or a mouse in their room. He was one of several people who intervened when students or classes were having problems. Sometimes these situations required tough decisions, and those often fell to Jerry. He was also an important face of Penland locally and statewide. He served on a number of boards, he curated and designed exhibitions for the Toe River Arts Council, he juried shows for other organizations, and he just knows a lot of people.

Deploying other skills, Jerry created memorable decorations for Penland holiday parties and celebrations, and we always looked forward to seeing what outlandish costume or float he would cook up for our July 4 parade. Jerry is also an artist, working in mixed-media painting and found-object assemblage. He started his final summer at Penland by co-teaching (with Jane Wells Harrison) a successful workshop in the drawing and painting studio.

During his ten years at Penland, Jerry gained skills that will serve him well in his new position. And when he drove out of here after the auction, a lot of institutional knowledge went with him. There have already been several meetings in which someone said, “I think Jerry always took care of that” or “Do we know how Jerry did that?” And registrar Amanda Hollifield showed up at last week’s staff meeting wearing a T-shirt that just said, “Where’s Jerry?”

Well, we know where Jerry is, and we wish him great success.