Although we have not been in the habit of documenting staff transitions on this blog, there has been a recent change that has to be noted: Dana Moore, who has been the school’s program director since September 1993, decided in November to leave that job; she finished up on January 14.

Dana’s first responsibility was hiring all of our instructors and working with them to plan the content of our workshops. With 130 different classes each year and no permanent faculty, this is an enormously complicated task. In an article in the school’s newsletter some years ago, she said, “It requires thousands of phone calls and some techniques reminiscent of used-car salesman tactics, although I try not to make people do what they don’t want to do.” It’s not just logistics, however. In that same article, she went on to say, “We are making decisions, not just about what students are interested in, but about where we think craft is going. There are very few craft schools, and we have to be the people thinking about the overview of what’s happening in craft and what it does in people’s lives.”

In addition to programming the classes, Dana directly managed the resident artist program and had supervisory responsibility for the gallery, community education, the archive, and studio management. She also put together two memorable instructor retreats and worked on countless other special projects. She was part of countless discussions about administrative matters large and small and was intimately involved in designing our glass, iron, wood, print, and letterpress studios, all of which were built during her time here, plus several other studios that have not been constructed yet.  In paying tribute to Dana, Penland’s director Jean McLaughlin echoed the sentiments of many by saying, “Dana has truly been the face of Penland and our programs.”

None of this, however, quite tells what Dana brought to Penland. For starters, she has one of the keenest artistic eyes any of us have ever encountered, giving her the ability to spot exceptional work in any medium, whether or not it conforms to her own taste. This also made her an invaluable consultant to the gallery and the communications office. She has been generous in her encouragement of other artists–both in their artwork and their teaching. And she has a subtle and provocative wit that’s almost impossible to describe.

Dana’s gifts as an artist and her ongoing artistic practice have kept her concerns and sensibilities close to those of Penland’s instructors, students, and resident artists, who generally viewed her as a colleague. The value to the school of this connection has been incalculable.

Dana’s artistic training was in photography, and she has continued making photographs the whole time she’s been at Penland. These have ranged from beautifully-executed pictures of things going on at the school to a series documenting her favorite hotel rooms to her sublime scanner pictures of birds nests and flowers. During the past 20 years she has also created an astonishing body of work made by altering the surfaces of early 20th century photographic portraits. Using both ends of a number two pencil, she selectively removes parts of the soft emulsion and draws elements back in. And, in the past few years, she has taken up painting with great enthusiasm. (You can see many more of Dana’s altered photographs here.)

Just before she left, Dana sent a remarkable letter to a group of artists she had worked with over the years. It included a long list of memory fragments that was both poignant and hilarious. The letter began with these thoughts:

“I am stunned to realize I’ve worked here over one third of my life. I’ve scheduled more than 2,000 classes, and over 1000 instructors, 47 residents, and about 25,000 students have come through during this time.

Leaving Penland is an almost impossible task–much harder than working here. Penland has been far beyond a job. It’s been honest and kind friends, a philosophy and a community, a set of beliefs about how we all want to live and work with each other and how the creative process informs our lives. I leave with my belief in the importance of what we all are doing stronger than ever.

“In my first years here, the winters were silent except for ice crashing from trees. I was always careful to lock the front door of Barely-A-House, a habit from Florida living, until I came home from a trip to find great drifts of snow in the living room and realized I had been locking doors that never even closed tightly. The mice in the house were less of a problem for me than the snakes that came in after them. I shifted from hating the mice to hating the things that were trying to hurt my mice.

“At that time the gallery sold only kaleidoscopes, post cards, and marbled paper. There was no community education program, no archive, no programs for core students and resident artists, part-time studio coordinators with no one to report to and no set hours, no one to design catalogs or write a press release, no web sites, no answering machines, not even a list of instructors who had taught in the past. Despite this, I know the people who worked before me had already made significant progress. I settled into this strange place with my moving boxes stored intact in case I needed to make a fast exit, and with no thought in mind except to try to hire my heroes, which I’ve been able to do.

“Penland has had its growing pains–creating a school that instructors, students, staff, and community all call their own while accommodating visitors and donors. Encouraging the spontaneity that makes the unexpected possible while creating rules that allow for safety and growth. The staff, mostly artists themselves, need a Penland, too–not always easy when your role is to accommodate others. Many instructors and students came with unique strengths but also needs and fears–prima donnas were rare and mostly entertaining. There is nothing predictable about 200 strangers. Some students came to recover: drugs, deaths, divorces. Others came to change their lives, realign their sense of themselves and their capacities. All, or nearly all, left feeling they had learned something significant. That, to me, is remarkable.”

Dana is planning to stay in the area.  We will be eager to see what she does next, and we hope to see her often. So, thank you, Dana Moore, for your incredible service to Penland School, to the field of craft, and to the many people who are fortunate enough to count you as a friend.

NOTE: Penland’s new program director is Leslie Noell, who we will introduce in an upcoming post. 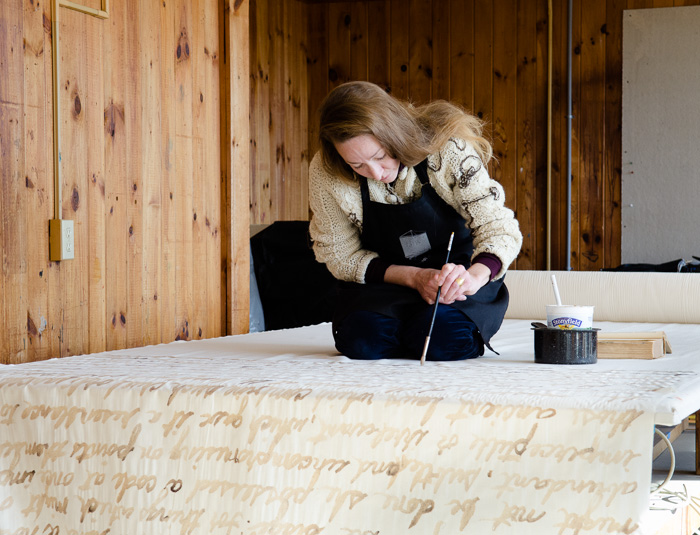 Sculptor Alison Collins working on a piece that will be installed in the Dye Shed this spring. She is copying an excerpt from Marcel Proust’s novel In Search of Lost Time onto a long piece of muslin. She is using a dye made from iron oxide she collected from some of her steel sculptures that had rusted in storage. The piece will be one of four installations at Penland that are part of a joint project with the North Carolina Museum of Art titled 0-60: The Experience of Time through Contemporary Art.

Core fellowships alum Ian Henderson is at work on a special project during a 3-month residency at Kohler in Wisconsin. He’ll be joined for a month each by Daniel Beck, Andrew Hayes, and Mark Warren. You can follow their exploits on Ian’s blog: thecastingfloor.wordpress.com.

The Casting Floor tracks the peaks and valleys, successes and failures, zeniths and nadirs of Ian Henderson, with the help of Daniel Beck, Andrew Hayes, and Mark Warren, at the JMKAC Arts/Industry Residency in Kohler, Wisconsin. We are designing and fabricating sculptural tiles (nearly 500 square feet of them!) that will be installed in the new Core Fellows house at Penland School of Crafts in western North Carolina. For a summary of the project and the design, check out our first post:

Some Background
This project started about a year ago, during the planning for the new Core Fellows house at Penland School of Crafts. The house will be a passive solar building, with a large, cast concrete wall inside of the heavily glazed (i.e. lots of windows) south face of the building. The function of the concrete wall is to absorb solar energy and store it during the day, then to radiate that energy out as heat at night. It acts as thermal mass, a key principal in passive solar design. You may get some sense of the layout from this preliminary rendering from architect Louis Cherry. The wall we’re concerned with is the one behind the refrigerators.

Our task, then, is to cover this wall with tiles, transforming the large concrete surface (21′x9′) into a design feature of the house without compromising its function…

Click here to read on. And be sure to bookmark Ian’s blog to keep up with all the developing action!

How many times has this happened to you? 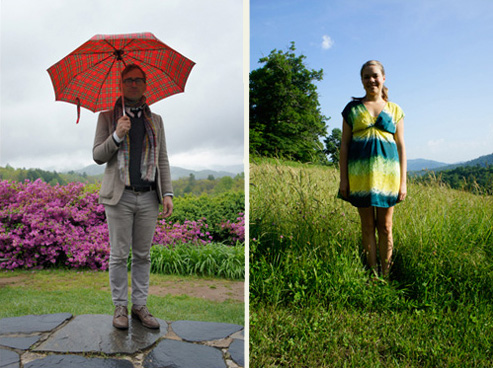 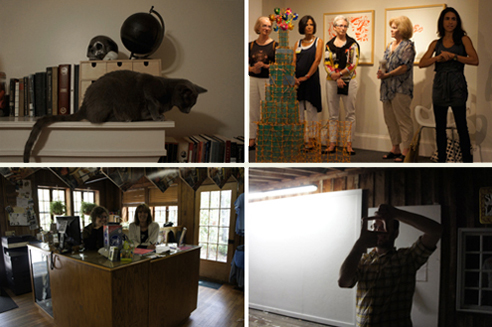 Maybe it’s time to learn the right way to light? 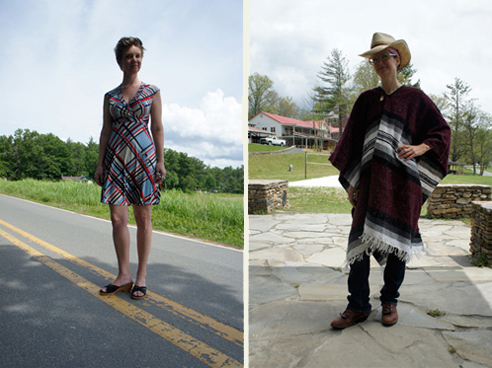 Time to… Spring into Flash Photography with John Woodin! 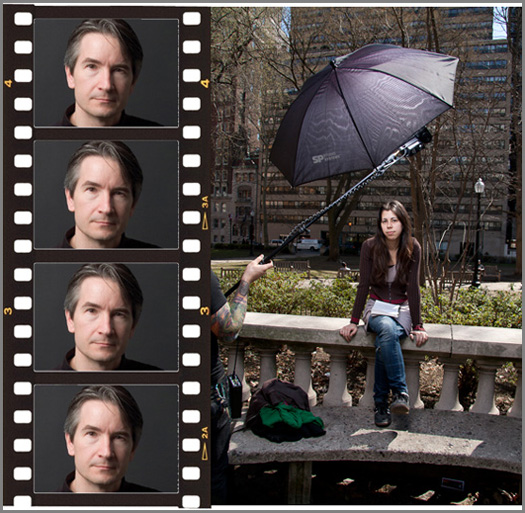 John Woodin, adjunct associate professor at the University of the Arts, is a Philadelphia-based artist and freelance photographer whose fine art photographs have been exhibited internationally and are held in private and public collections including the Philadelphia Museum of Art, the Allentown Art Museum, the Smithsonian Museum of American Art, and the Library of Congress. A monograph of his work, City of Memory: New Orleans Before and After Katrina, was published by the Center for American Places at Columbia College Chicago. 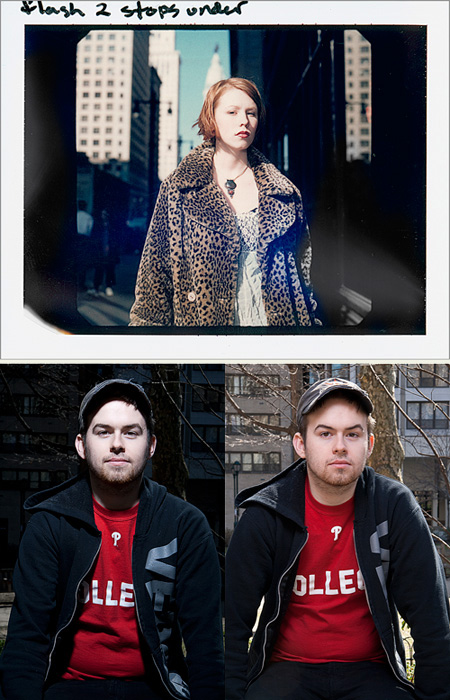 “Understanding photographic lighting is the key to making great photographs. This one-week workshop is designed for photographers of all levels who wish to improve the quality of their work using photographic lighting.   We will begin in the studio; learning the basics of classical, low key, high key, and checkerboard portrait lighting; then work our way out of the studio using portable off-camera flash on location. Workshop participants will learn and practice on-location lighting techniques for daylight exterior environmental portraits, daylight interior environmental portraits, and day-for-night portraits. Additionally students will be instructed on best practices for digital workflow and color management, making custom camera, print, and monitor profiles, color-balancing techniques, and ink-jet color printing.” 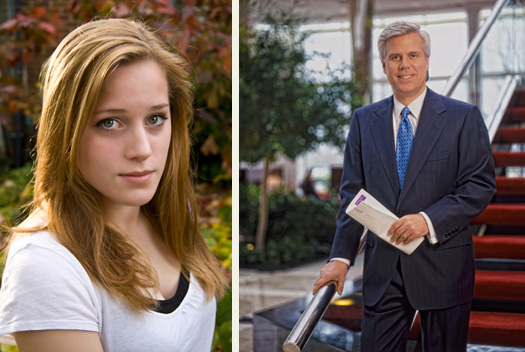 Location Lighting with Off-Camera Flash; April 7 – 13, 2013, in the photography studio:

This workshop will familiarize students with the principles, techniques, and equipment of photographic lighting, including studio strobes and small flash units. We will concentrate on controlling and modifying the quality of light from off-camera flashes used in combination with available light as students use digital cameras to shoot a variety of studio and environmental portraits. We will emphasize essential lighting techniques and creative problem solving and also cover digital workflow and color management. Along with their cameras, students are encouraged to bring off-camera flash units and laptop computers. This class welcomes students of all levels. 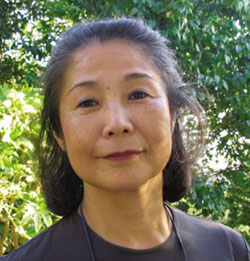 Yoshiko Iwamoto Wada, who’ll be teaching Boro Transformed (boro is a Japanese folk fabric; click here for a good explanation) in the textiles studio at Penland this summer, was featured last week in an article in The Japan Times.

Yoshiko Wada, textile artist and scholar, believes the word “sustainable” in foods and fashion shares the same philosophical taste. “Both are a holistic approach, about health, environment, and the community that supports it. We must recapture and rethink how we are going to sustain our Earth and society, our community and our cultural heritage,” she says.

You can click here to read the complete article.

And you can click here for more information about Yoshiko’s workshop and other Penland textiles classes.