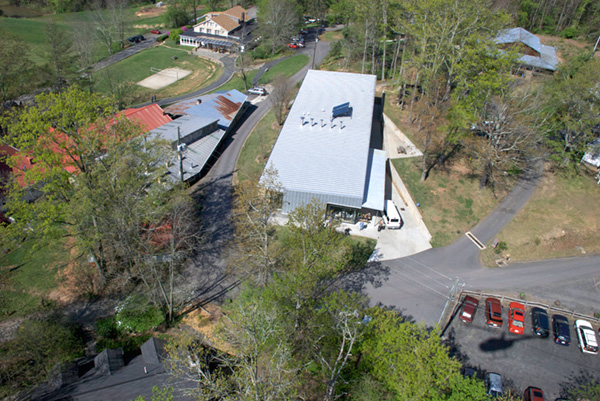 Program director (and photographer) Dana Moore and I had a thrilling experience last week riding in a helicopter over Penland so we could make some aerial photographs of the campus. We’ll be using a few of them in our upcoming fall/spring catalog and we’ll find lots of other uses for them as well–starting with this blog. The photo above shows the letterpress and print studio in the middle and the clay studio on the left. 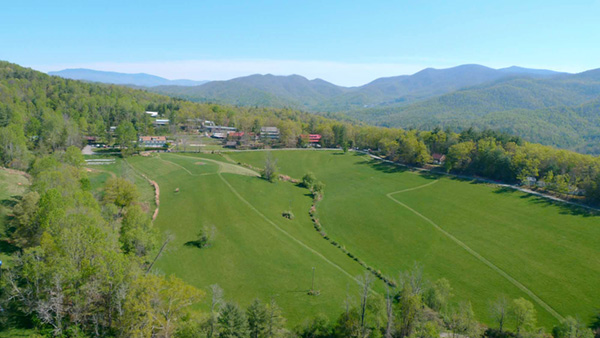 Here’s a long view from above the meadow. The red spot in the middle of the frame is the roof of the Craft House.

Here you can see from the Craft House (lower right) all the way up the hill to the wood studio. 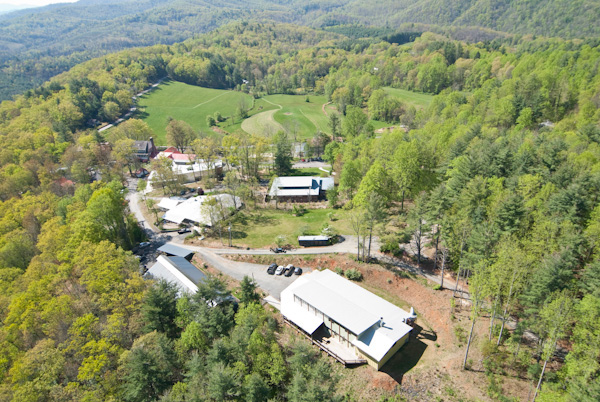 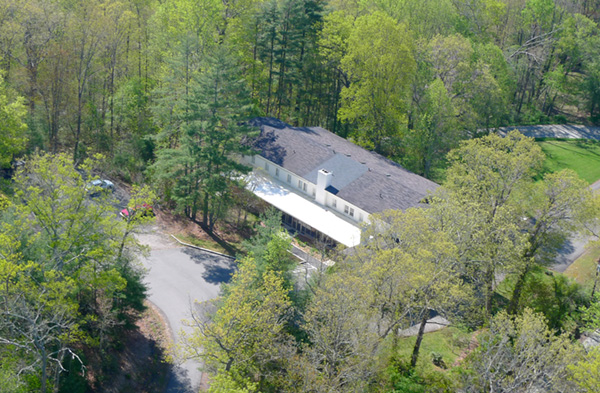 This is Horner Hall, home of the Penland Gallery. There is a larger group of aerial photos on our Facebook page if you want to see more. And the answer to your question is: helicopters are really, really fun.

Sam first came to Penland as a student in 1983, and returned just over ten years later to teach, which lucky for us, he continues to do every few years. We have been showing his work in the gallery since 2007, both in exhibits and in the sales gallery. (He will be sending work for the upcoming Weight of Black exhibit later this month.)

Sam’s work reveals itself in layers. First there is the color – he is generous with saturated reds and oranges, and a judicious use of black. Then he edits the forms, keeping them classic and elegant – all the best to carry his skill with the murrini techniques. It seems once you have mastered a traditional technique you have license to play with it – and Sam makes it look effortless. There was a bottle with white cane work that looked like controlled scribbling – soft and loose and perfectly done all at the same time. In contrast – there are pieces that are precise and orderly – wild only in his use of exuberant color. There is much more to the work than meets the eye on first glance – and it would appear that is part of the attraction.
Sam has covered allot of ground since his early days at Penland. Both he and his glass have a quality of integrity, consideration, and professionalism that makes showing his work a pleasure. 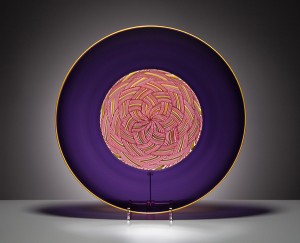 About Sam
Sam Stang was born in Northfield, Minnesota in 1959. He attended Washington University in St. Louis, Missouri from 1980 – 84. He studied with Fritz Dreisbach at Penland School of Crafts in 1983, and with Lino Tagliapietra at Haystack Mountain School of Crafts in 1991. Sam was a founding partner in Ibex Glass Studio, 1985 – 1991. In 1992, he moved to Augusta, in rural south St. Charles County, where he remodeled an old auto repair shop and turned it into Augusta Glass Studio, which he still operates as a sole proprietorship. Stang is married to Kaeko Maehata, who is also a glassblower.
About the Work
All of my pieces are made by using traditional European glassblowing techniques. With the murrini pieces, I begin by making glass rods, which are patterned in cross section. The rods are cooled and cut into thin pieces and arranged on an iron plate, which is then heated to fuse the murrini. This is then rolled into a tube on the end of a blowpipe and shaped into the final form.
Every piece I make is entirely produced hot at the furnace. The banded bowls are blown as separate sections and fused together. This technique, known as incalmo, requires a great deal of skill and cooperation. I work with at least one assistant and often with a team of three experienced glassblowers.
Penland Gallery web page
Sam’s website
Category: Penland Gallery
Penland links
Categories
Archives
Subscribe to Posts!
Penland School of Craft